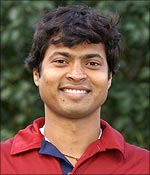 After shining on the turf, India's hockey sensation Dilip Tirkey is all set to appear on the silver screen in new innings.

The suave, soft-spoken and quiet former Indian hockey captain has agreed to make his acting debut in an Oriya film -- Toro Moro Katha Heba Chup Chap (You and me will talk silently), likely to be released during Dusshera this year.

The 33-year-old tribal talent from Orissa's Sundargarh district represnted the country in three Olympics, but is not very confident of acting.

"Acting is totally new for me. This is altogehter a different experience. However, the director of the film has given me enough confidence," Dilip, who recently announced his retirement from international hockey, said.

Film director R N Mohanty, who had been watching Dilip since a long time said, "The hockey player had elements of acting. Those talents need to be explored."

Dilip would perform the role of an elder brother, a symbol of sacrifice in the film where a tea shop owner could become chief minister of the state.

"Dilip will sacrifice everything to make this stranger the chief minister," Susant Das, the script writer, said. In the two-and-half hour film, Dilip would appear seven times.

Though the tribal icon had the experience of facing camera for advertisements, this would be for the first time that Dilip had to be seen on big screen, he said.