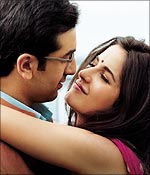 Throughout the running time of Prakash Jha's new film, one where every dialogue is expository and meant to take the rather busy narrative forward, every now and then characters all and sundry halt their bloody ministrations and decide to explain what they think politics means.

Patronising every single time, they define Raajneeti so often in their own way -- their own invariably verbose bumper-sticker way -- that it seems redundant for us to even try.

Perhaps, like politics itself, this film is meant to be inexplicable. Perhaps Prakash Jha is just punning on his initials, and laughing at us all. Perhaps the attempt is purely, callously political: bring together a motley crew of actors with appeal varying across demographics, to try and capture every single seat. Perhaps I'm being too kind. Yes, I suspect it's that last one.

Raajneeti, essentially Sarkar Raj minus Amitabh Bachchan, is a hyperactive drama given to much yelling and little thought. The screenplay is weak, manipulative and every possible kind of lazy, with an omniscient narrator who vanishes after a while, a slew of unbelievably one-note characters, clunky dialogue that often lapses into something from period cinema, and bloody deaths thrown in every few scenes to kickstart the drama in this exhausting 3-hour film.

All that buzz about The Mahabharata, you ask? Well, there is a reason it worked so well as a Sunday morning TV show. Raajneeti, unsubtly and conveniently labelling its characters Karan, Duryodhana, Krishna, tries so hard to maintain their epic arcs while relating them to the sweep of this gun-toting film that it's weighed down by far, far too much plot.

Skillfully dealt with, this may not necessarily be a problem, but here Jha is in masala mode, a lethal combination considering he's serving us the single oldest plot we've known as a nation, randomly meshed together with the most iconic American film of all time, The Godfather.

Therefore, absolute predictability, which, combined with an ensemble cast uniformly reduced to amoral caricatures, results in a film that only works if you take friends along and provide your own laughter and commentary track.

It starts off relatively alright, if a trifle too bombastic. The narrator shoves the film at us mercilessly, throwing up characters of all kinds, essentially till we get used to the who's who.

There are some initial moments of quirky allegory and even moments of political stratagem, before things start going boom. And then, prodded along by the ludicrous need to go from Kunti's pregnancy to Duryodhan's death in three hours, all of politics is reduced to gang-war, and all dialogue to pure bluster.

Each member of the cast has been handed an expression and told to wear it for the film, which they dutifully do. Yudhishtir would have been proud. Imagine Arjun Rampal as Sonny Corleone, however. But more on the players in a bit.

The film is about a state-ruling political party which splits up amid great animosity. The top brass decide on taking everything in their own hands, from murder to sabotage, underlings scurrying around in the background without much to do.

Then again, maybe that's because the extras are all uniformly horrible amateurs, there for the sole purpose of making the main cast look like they're doing more than chewing up scenery.

Anyway, the ruling party and the new, rebel offshoot tear into each other with much enthusiasm, and clearly don't need an opposition party to keep them in check.

That's pretty much it, a chess game played by kids intent on killing bishops before thinking ahead, and while that could have been at least guilty-pleasure fun, the film tosses in their grandparents and assorted elders as well, breaking into sermons every so often as they desperately try to keep things mythological. 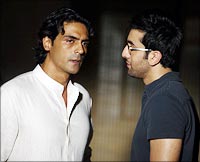 Ranbir Kapoor plays Samar -- pronounced Summer, despite him being colder than a gravestone -- the Michael Corleone of the piece, and it hurts to see him reduced to this narrow-eyed cardboard protagonist.

The role has potential -- it is doubtless interesting how Jha has turned Arjun into the villain of the piece -- but so intent seem the makers on keeping their labels in place, that the character goes from an affable kid to the merciless brains of the operation in one fell swoop. He wears glasses, wears white, and massacres folk in the name of family: in Manmohan Desai's 1981 multistarrer Naseeb, an infinitely more enjoyable feature, Shakti Kapoor played this role.

Rampal is the mercurial elder brother, speaking in chaste Hindi and curdling his eyebrows to show intensity. He seems more confident than before and that gives him some presence, but he still can't act, a fact highlighted in a scene where he abruptly breaks into a song and does a peculiar audition for Heath Ledger's Joker role.

Nana Patekar sleepwalks through his role, as does Naseer, even as Ajay Devgn finds an appropriate scowl and pastes it on his face from start to scratch.

Jha's been particularly cruel to Katrina Kaif, this misogynistic film not just turning her from a sportscar-driving airhead to a woman who'd marry anyone, but also making her look unforgivably frumpy throughout the film. She does an efficient Priyanka Gandhi impression for a couple of scenes, but up until then, she's an aunty. Give her a mango drink, for God's sake, nobody wants to see her like this.

The only decent acting in the entire bunch comes from Shruti Seth, doing quite well as a politically ambitious temptress, and Manoj Bajpai, the actor solidly making his lines work -- except when he's acting drunk -- and walking away with a good Vajpayee impression and, for lack of competition, the film's hero tag.

The film starts off aggressive, turns into a game of toppling pawns, and ends up a farce as Kunti meets Karan and the audience dissolves into giggles. Jha's films, while often flawed nearing the end, usually provide some sort of grass root insight; this one pretty much dares you to take it seriously. Don't even try.

Seth's power-starved trollop drops her pallu and keeps begging men for a ticket, any ticket. I'm assuming she won't be satisfied with one for this film.