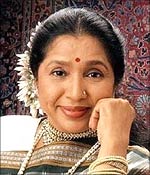 The older generation of Bollywood is becoming more and more pro at catching up on Twitter.

After actors Shammi Kapoor and Amitabh Bachchan, it is veteran singer Asha Bhonsle and lyricist Javed Akhtar who have entered into the micro-blogging sphere.

While Akhtar joined Twitter on Monday, the 76-year-old singer has been on the site for quite sometime now but was welcomed by filmmaker Karan Johar on Tuesday.

"Apologies for my late twitter announcement... the legend... and the voice that nurtured my love for the movies @ashabhonsle is in the house!!!(sic)," Johar tweeted.

"Pancham jokingly referred to song Mera Kuch Samaan as Luggage Song. My band members still call it that when we are on concert tour," reads Bhosle's latest tweet.

But Akhtar, 65, has already outdone the singer as far as number of followers is concerned, garnering 4638 within 19 hours of joining Twitter.

"Hi everybody. This is Javed Akhtar joining the twitter club. Hope to share ideas, thoughts, feelings, experiences with you all. May I!" he wrote in his very first tweet.

The lyricist was welcomed by Johar as well, who wrote, "@javedakhtarjadu adds to twitter humour and perspective!!! Follow the man and his cartloads of wisdom!!"

Akhtar all set to return to Pak team for Asia Cup