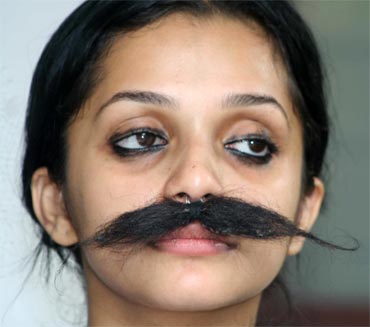 Ann makes her debut as the heroine. She is veteran actor Augustine's daughter. Kunchacko Boban and Indrajith play the heroes.

Lal Jose has made his debut as a director with the film Oru Maravathoor Kanavu. He shot to fame with some spectacular films like Meesa Madhavan, Chanthupottu, Classmates, Arabikkadha and Neelathamara among others. He had scripted and directed the film Puram Kazhchakal, based on C V Sreeraman's book.

The script of Elsamma Enna Aankutty has been written by Sindhuraj. The film is being produced under the banner of Rejaputhra Visual Media by Ranjith.

"Once again, I am looking forward to meeting the challenges of yet another interesting story to match up to my audience's expectations," says Lal Jose in his blog. The film-maker is busy with the pre-production works of Elsamma Enna Aankutty.

Rajamani scores the music for the film and the lyrics are by Rafeeq Ahmad. Vijay Yesudas, Swetha, Devanand, Achu Rajamani, Rimi Tomy, Sithara Balakrishnan and Reshmi are the singers.