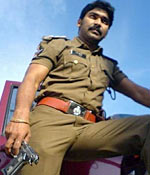 Come Monday evening and most households in Andhra Pradesh are tuned to Gemini TV to watch their favourite Telugu soap, Mogali Rekulu.

From the very first week of its premiere, the serial has been a roaring success. Over 530 episodes later, director, Manjula Naidu believes that the story has only just begun. "I am not done with the story yet. There is so much to say," she says.

Mogali Rekulu are those fragrant flowers that blossom amidst thorns and snakes. Living up to that name, the story line is about the solace of love in turbulent lives.

A family oriented serial, the story is woven around the life of five orphaned youth who grow up together. Four of the orphans -- Dharma, Satya, Daya and Shanti -- are victims of a family feud while Keerthana is the victim of a mother's innocent passion for music.

The five meet by a twist of fate and share various experiences of a rather turbulent life.

Produced by Pallamala Sudhakar, the serial has managed to break away from most stereotypes.

"The characters are very real. They are like any other person you'll meet in real life. The dialogues too are not bookish," says Manjula about the runaway success of the serial. "The serial is like a parallel life running on TV," she adds. A look at the number of blog posts dedicated to the serial is an indicator of just how real this parallel life has become.

What also keeps audiences hooked to the serial is the fast pace. "Every day there is some new development. People can't wait to know what will happen next," says P Kiran, Programming Head, Gemini TV.

The story has developed with many a twists and turns. For the director, however, the beginning was the best. "I love the beginning; it was the base for all the characters to develop. What they did when they were children is now magnified," she says.

Though the serial deals with the same spectrum of emotions that any other soap touches upon, Mogali Rekulu still has a more progressive story line and attempts to sensitise viewers towards the situations it throws up.

"That is very different from the kind of serials that are aired today. Right now what is telecast is mostly very raw and blatant. That really saddens me," says Manjula who has also been a member of the Central Board of Film Certification.

Catch Mogali Rekulu on Gemini TV, every Monday to Friday at 8:30 pm.