James Cameron in India to discuss future of cinema 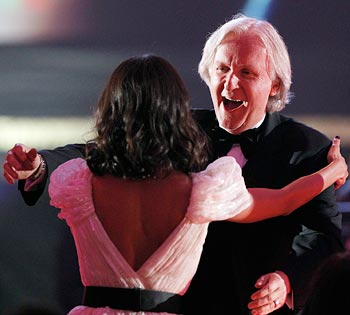 Filmmaker James Cameron will be in India on March 13 for the first time.

He will be discussing "The Future of Cinema" with Aamir Khan in a conclave at a five star hotel in New Delhi, watched by few hundred over a dinner.

Lasting about 90 minutes and ending around 09-30 pm, it will include questions from the attendees also. Aroon Purie, Editor-in-Chief of India's leading news magazine India Today, will chair the session.

Describing Oscar winner Cameron's movies, Conclave says: "movies speak the language of immense courage and deep spirituality. His female heroes are fearless and all powerful, his men learn the power of conviction."

It talks about Cameron's "dropping out of college to drive a truck for the local school district... selling the script of The Terminator to Hemdale Films for one dollar on the condition that he could direct it".

"India Today Conclave 2010" whose theme is "New Decade: Great Expectations", is being organised by The India Today Group at Taj Palace Hotel in New Delhi on March 12 and 13.

Image: James Cameron and Zoe Saldana at the 2010 Golden Globes

Cisco CEO on the future of Internet