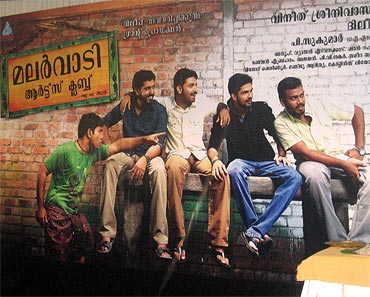 He first tasted success as a singer. Very soon Vineeth Sreenivasan stormed the big screen too with the success of the Malayalam film, Cycle.

The singer-turned actor also shared the screen with his father, Sreenivasan in Makante Achan.

Now he is turning script writer and director, with Malarvady Arts Club.

Malarvady Arts Club is being produced by actor Dileep, who earlier made Twenty 20, one of the biggest money spinners ever in Malayalam film history.

P Sukumar cranks the camera while Shaan Rahman is the music director.

The cast of five young boys and two girls was selected through a talent hunt. A rehearsal camp was held to choose the final gang.

A star is also touted to play a cameo in the movie story. Right now his/her identity is under wraps. As Dileep says, "It could be anyone. We'll let it remain a mystery for now."

The pooja of the film saw some of the biggest names in attendance including Mammootty, Dileep, Sreenivasan, Prithviraj, Kunchacko Boban, Mukesh, Lal Jose and Rosshan Andrrews among others.

First look: Kavya Madhavan and Dileep are back!