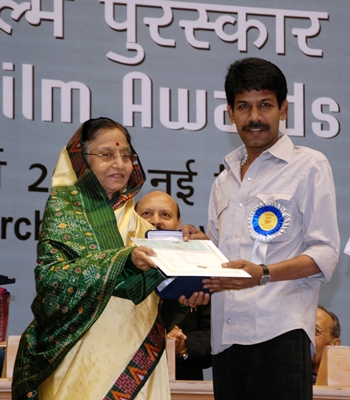 Priyanka Chopra and Arjun Rampal joined an elite club of winners on Friday after being presented with the National Awards at a ceremony in New Delhi which also saw veteran cameraman V K Murthy receiving the Dada Saheb Phalke amid a standing ovation from the audience.

The award for best direction went to Bala for Tamil film Naan Kadavul.

Priyanka, 28 received the Rajat Kamal Medal and a cash prize of Rs 50,000 for Best Actress for her role as an
aspiring model in Fashion with her co-star Kangana Ranaut, also winning the award for Best Supporting Actress.

Rampal received the award for Supporting Actor for his role as a struggling musician in Rock On while the award for
Best Actor was conferred on Upendra Limaye for the Marathi film Jogva. It is a first national award for Rampal, Priyanka and Kangana.

87-year-old Murthy, who shot India's first cinemascope movie Kagaz Ke Phool and best remembered for his stunning camera work for all films of legendary Guru Dutt, is the first cinematographer to be given the Phalke since its inception in 1969.

The 56th National Awards were given away by President Pratibha Patil.

Bala on Naan Kadavul and filmmaking