That Magnificent Man In His Flying Machine 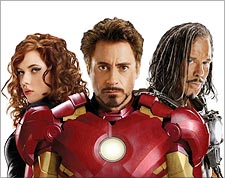 He isn't everybody's cup of tea, this Tony Stark. Heck, even fellow superheroes he teams up with are more often beleaguered than besotted by his overdone charm, a boozy womaniser given to far, far more flash than, well, Flash.

He's petulant, spoilt, arrogant to the point of being obnoxious, armed with an overcompensatory need for women, and has, on one particular occasion, gotten so drunk that his Iron Man suit was taken over and used for murder. True story.

(Um, perhaps the fact that this particular reviewer treats canonised cartoon fiction as fact should tip you off about how much of a fanboy you are now reading. Consider yourself warned.)

And yet, played as he is by the increasingly beguiling Robert Downey Jr in the spectacular new Iron Man 2, its hard not to fall for him.

Creator Stan Lee might have based the billionaire playboy on Howard Hughes, but director Jon Favreau adds some Richard Branson cocky daredevilry -- this Stark fires a racecar driver to take the wheel himself, since he owns it -- and a significant amount of Steve Jobs. (His first appearance is a keynote address, for heaven's sake.)

The result is a hero who is, nine scenes out of ten, a mumbling, stumbling embarrassment. And that's just what makes him super.

The first film gave us the backstory -- that of an arms-dealer fending for his life inventing a heavy metal suit to survive, and then going on to kick terrorist butt -- and this sequel packs in, some might feel, far too much gravy for one film.

Plot is thick as gravy for these two hours, with villains and spies and rivals and women and hangovers -- not to mention allusions to upcoming Marvel megafilms -- and one may well wish for the narrative to slow down.

But this is Iron Man, baby, and he writes his own hyperactive ticket. Buckle up and keep your eyes open, this is what reading a good, meaty comic feels like.

What separates Stark from the traditional superhero most often glimpsed in our blockbusters -- aside from having actual personality -- is the fact that he has thrown off the secret identity and embraced celebrity full-on, revelling in the spotlight. No black turtleneck for this man, clearly.

He shines in a suit that could have been made by Ferrari, colours and all, and so entranced is he by the lure of his own reflection that he hands Stark Industries over to his secretary. Well okay, he does have a rather pressing literally fatal concern as well, but its really easy to believe that Tony'd rather party instead. Or just look at himself for another fifteen minutes.

He doesn't get to do that in this jampacked film, with frustration around every corner. There's the US Senate, trying to confiscate his suit.

There's Mickey Rourke's Whiplash, a silently intimidating Russian with an accent heavier than his sportscar-slicing whips and a grin dripping with blood.

There's Gwyneth Paltrow as Pepper Potts, the secretary/girlfriend who is really beginning to get into spousal mode.

There's Samuel L Jackson's annoyingly omniscient Nick Fury, who speaks in riddles while managing a double-bored stare out of just one eye.

There's Col James Rhodes, played by Don Cheadle, a Stark ally who suddenly seems given to showboating and larceny.

There's Scarlett Johannson as that sexy new legal aide he hasn't been able to spend enough time with.

And then there's Justin Hammer, played by Sam Rockwell, an arms manufacturer smooth as gravel and trying hard to out-Stark Stark, visibly the Gates to this Jobs.

Sounds exhausting? It would have been, if not for the man who drives Tony's car. Favreau, when not playing Stark's trusty chauffeur Happy Hogan, runs a light ship, and this film wears its material -- the sinister villains, the big robot-on-robot setpieces, the father-son revelations -- casually, like an loosened Tony Stark necktie.

Everything falls into place and is given room, but nothing seems to weigh the film down, thanks largely to pacing finesse and clever writing. 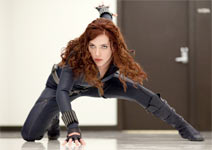 It's all too rare to see a superhero film with repartee this sharp -- Potts and Stark banter with vintage, fantastic ease -- and the smartly overlapping quips are matched by the subtleties on the side.

Like Stark -- Iron Man helmet off, sunglasses on -- lying in the middle of a giant donut sign, wolfing down the things to get rid of a massive hangover. And there's a lot more nuance where that came from.

Rourke is a supreme baddy, a supervillain for the ages, menacing at every step and yet kept in the shadows enough to have us craving a lot more.

Rockwell is pitch-perfect as Hammer, the true villain of the piece, and John Slattery of Mad Men makes a fine Superman-movie-style appearance as Tony's late father, Howard Stark.

Paltrow positively shines as Potts, more than holding her own alongside -- and often against -- Downey.

As for him, he the (iron) man. That Robert Downey Jr has effortless charm is not a point of debate, but it is remarkable how lightly he wears both his costume and his character, while inhabiting them completely.

From dissolving champagne bottles noisily for an audience to seducing cameras as he speaks of self-gratification, there seems to be nothing that Downey's Stark can't get away with -- even if its by the scruff of his neck. Here is an actor doused in charisma and alarmingly comfortable at expressing narcissism, and casting really doesn't get more perfect.

Sure, there isn't enough room for a silent, beautiful beat. But this is Iron Man, goshdarnit. And the beat is appropriately loud metal. Hell, he even takes Richard Nixon's v-sign and makes it awesome.