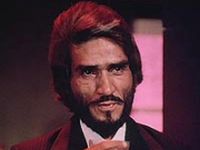 The actor breathed his last at the Kokilaben Dhirubhai Ambani hospital in suburban Mumbai. He was suffering from cancer, hospital sources said. He was 71 years old.

Macmohan, who started his career with Haqeeqat in 1964, acted in over 175 films in a career spanning 46 years.

He shot to fame as the gun-toting dacoit 'Sambha' in Sholay. After that he never looked back and has essayed a number of villainous roles in films like Don, The Burning Train and Satte Pe Satta.

"No one could have suited Sambha's role better than Macm,ohan. He will always be remembered by that role," Sippy said.

Amjad Khan's conversation with him are among the most favourite dialogues from the film. MacMohan is asked by Khan's character, "Arrey o Sambha, kitna inaam rakhe hain sarkar hum par?" (Hey Sambha, what is the reward the government has placed on my head?)  And prompt comes Sambha's reply, "Poorey pachaas hazaar (altogether Rs 50,000)".

Javed Akhtar, who penned those famous lines, says only Macmohan could have done justice to them. "The way he sat on the hillock, overlooking Gabbar's den, was a sight to behold," the noted writer-lyricist said.
Source: PTI© Copyright 2020 PTI. All rights reserved. Republication or redistribution of PTI content, including by framing or similar means, is expressly prohibited without the prior written consent.
Related News: Hey Sambha, Macmohan, Mumbai, Gabbar Singh, Amjad Khan
SHARE THIS STORYCOMMENT
Print this article