Aishwarya-Abhishek's day out in Cannes 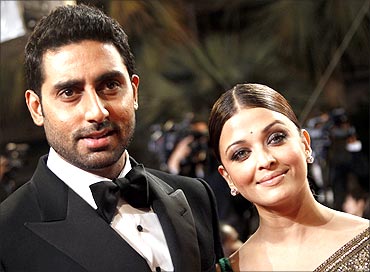 She has often been criticised for favouring western couture over Indian ensembles during her much publicised stints on the French Riviera but Aishwarya Rai Bachchan was spotted in a traditional outfit on day six of the Cannes film festival.

Giving her company on the red carpet was husband Abhishek Bachchan in a tuxedo.

The actress, who is one of the best known Indian faces across the globe, has shied away from wearing ethnic outfits ever since her debut at Cannes in 2003, when she was criticised for wearing a green sari.

'Aishwarya is in Cannes for L'Oreal every year as part of the International Dream Team of L'Oreal where on instruction she must wear international western designer wear,' the actress' spokesperson told PTI.

The 36-year-old wore a creation by Kolkata-based designer Sabyasachi Mukherjee. She had earlier chosen a sari by the same designer for her appearance on the Oprah Winfrey Show.

'I have given her many outfits for her stint at Cannes this year because she wanted to wear something Indian this time but I am not sure which dress will she be wearing,' Sabyasachi told PTI.

The actress, who has become a permanent fixture at the Cannes red carpet over the years, has wowed the snappers with her choice of gowns.

She wore a violet tulle and mousseline gown from Elie Saab for the festival opening and for her second outing on the red carpet with fellow L'Oreal spokesmodel Eva Longoria, Aishwarya opted for a black Armani Prive strapless number, which hugged her curves in all the right places. The third day saw her on the red carpet in a pink Gucci gown accompanied by her mother who chose to wear a cream and gold sari.

So far Deepika Padukone is the only Indian celebrity to take the six yard route to style at this year's festival. She stepped out on the red carpet for the premiere of the film The Tournee in a cream and gold Rohit Bal creation which she teamed with Kundan jewelery and a stone studded clutch.

Meanwhile Mallika Sherawat has kept a relatively low profile this year with demure fashion choices. She had grabbed headlines with her first appearance at Cannes, when she opted for a plunging golden blouse paired with a slashed skirt as she posed with Jackie Chan for the photocall of their film The Myth.

Her fashion choices again caused a stir when she turned up at the premiere of 'Inglorious Basterds' in Los Angeles wearing a sheer black gown with her underwear visible.

Image: Abhishek Bachchan and Aishwarya Rai arrive for the screening of the film Outrage by director Takeshi Kitano on Monday. Photograph: Eric Gaillard/Reuters