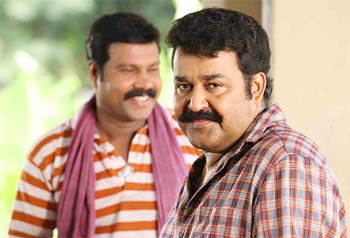 Mohanlal is playing a lorry driver with a haunting past in the Malayalam film, Shikkaar.

According to director M Padmakumar, it is a story that is being narrated on a realistic premise.

Scripted by S Suresh Babu, the film has been in the reckoning for quite some time now and is being shot inside the forest areas of Idukki.

Mohanlal plays father to a teenage girl (Ananya of Nadodigal fame) who is in fact his elder brother's daughter but has been growing up as his own after her parents' death.

Sneha plays Mohanlal's wife in the film. She will join the shooting soon, when the crew shifts to Ramoji studios in Hyderabad.

Shikkaar will be in a similar genre as films like Naran and Bhramaram which had Mohanlal playing deglamorised roles, but the similarities end there.

The movie is produced under the banner of Sreeraj Productions. Manoj Pillai is the cinematographer and M Jayachandran is the music director.

Mohanlal is Alexander the Great

Mohanlal-Priyan @ IPL: All izz not well