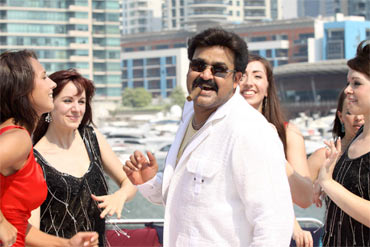 The shooting of Mohanlal's latest Malayalam film Casanova, directed by Rosshan Andrrews (of Udayananu Tharam and Notebook fame) has started in Dubai.

The film is being produced by Dr C J Roy of the Confident Group.

According to history, Casanova was a Venetian adventurer and author who is synonymous with the art of seduction. Womanisers have all along been named after him.

Mohanlal, who is riding high after the big success of his Ramzan release Shikkaar, is evidently more confident now to go ahead with Casanova which was launched sometime back.

The film will be shot in foreign locations including Malaysia, besides the Gulf.

The crew consists of camera man Gim Ganesh, art director Sunil and costume designer Sai. The film is being distributed by Ashirvad through Max Lab.