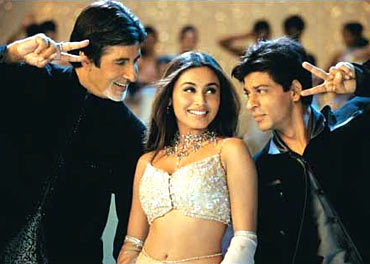 Reader Atishay Agarwal shares with us a blooper that he spotted in the movie Kabhi Khushi Kabhie Gham.

Kabhi Khushi Kabhie Gham released in 2001. In one of the flashback scenes going back 10 years, Shah Rukh Khan returns home after his studies and Amitabh Bachchan starts planning his wedding with Rani Mukerji.

There is a party at their house in which they sing Say Shava Shava. Suddenly, Amitabh breaks into the song Aati Kya Khandala from Ghulam.

However, Ghulam only released in 1998, whereas the supposed year of that scene is 1991 according to the flashback.