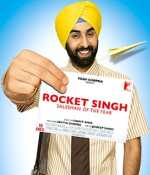 It's one of the most fun-seeming releases in a while, and Shimit Amin's Rocket Singh: Salesman Of The Year is looking good. Ranbir Kapoor's in fine form, and writer Jaideep Sahni is a class act. Salim-Suleiman's soundtrack for the new film, however, has only three new tracks, the rest a smattering of random YashRaj hits.

'Main hoon bada busy/No time to even be' goes the inevitably suggestively titled Pocket Mein Rocket, penned clearly by Sahni in one of his more whimsical moods.

The song, referring to the title character's business cards in his pocket, is witty and sharp, while Salim-Suleiman give it a groove that makes it work even if you aren't listening to the clever words. The basic melody is whistle-able, and while the EMI-talk begins to sound repetitive, Benny Dayal sings it lazy enough to keep it likeable -- even though it does outstay its welcome at over four and a half minutes.

Vishal Dadlani sings the next track, Gadbadi Hadbadi. A funky track, this one's got a nice casual feel to it, and while Dadlani's vocals seem more aggressive than the song itself demands, the chorus is likeable, in a forgettable sort of way. It's a track which has riffs thrown in for the heck of it, and the kind of thing that can only work because of a good montage on screen.

Composer Salim Merchant goes one up on brother Suleiman and steps behind the microphone for Pankhon Ko, a nice soft track about taking flight and finding the wind beneath one's wings. The poetry is simple and effective, and Salim's voice is a pleasant surprise. It's the kind of dreamy song that works so well on Ranbir -- remember Iktaara from Wake Up Sid? -- and ends up being an appropriately unspectacular pick of this laidback soundtrack.

Fifteen tracks, but nothing to really make this CD worth buying. I think they released the soundtrack just for completeness' sake. One wishes they'd released tracks from the background score instead.