Sandra Bullock, remember her? She sort-of, kind-of inherited the 'America's Sweetheart' title when Meg Ryan's lips went all weird looking and Julia Roberts couldn't figure out whether she was an 'actress' or a 'star'.

She drove a bus so Keanu Reeves could figure out a way to get everyone off it; she became the object of dual affections in the lives of a comatose man's family; she went undercover at a beauty pageant to neutralize a threat...and then? Two Weeks Notice? Miss Congeniality 2? Crash? She became another woman falling over the precipice of the big four-oh.

Suddenly there were other women willing and more able to wear that sweetheart moniker. Roles in films like The Lake House may have cast her as a romantic lead but there was really no mistaking her for a sweetheart, right? Sometimes opportunity comes a-knocking again, even for women whom the industry considers 'too old' for certain types of roles. So if Meryl Streep could hold her own (and then some) in Mamma Mia! maybe Sandra Bullock could pull off another romantic comedy? 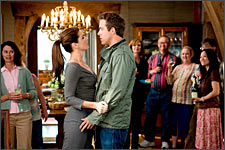 Cue the opening credits to The Proposal, in which she plays Margaret Tate, the Editor-In-Chief at a New York publishing house. She is so scary every employee dives out of her path when she enters the building. Instant messages race through the office to let everyone know that she has arrived. Her assistant Andrew (Ryan Reynolds) has been little more than a slave for over three years and from the way she dresses to the way she carries herself she comes off as the achiever whose career has nowhere to go but up.

Does that sound like a movie you'd want to watch? Didn't think so.

Everything seems peachy keen in Margaret's life for about ten minutes. And then the raison d'etre of this movie arrives, which is this -- Margaret is Canadian, i.e. a foreigner. Her work visa has expired and she is in danger of being deported as well as losing her job. Unless she can come up with a miracle plan that will ensure she stays in the country.
Her genius idea? Marrying her American assistant.

Needless to say, this is far from a desirable situation for Andrew who refers to her as Satan's Mistress when he talks about her in private. Since the plan is a huge surprise to everyone, including the 'groom', Margaret decides that the couple should go to his family home for the long weekend to get to know each other better. You know, before their interview with the authorities where they have to prove that this is not just a marriage of convenience. 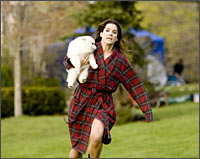 First thing Margaret wasn't prepared for -- Andrew's family lives in Alaska. That's not the only surprise in store for her either. But I'll let you discover the rest on your own. Suffice to say that there are a few stock plot points and characters in this yarn but there are also some refreshing twists on been-there, seen-that stuff. What it all adds up to is a sunny little comedy that owes everything to its lead pair.

Miss Bullock goes back to her glory days to retrieve mannerisms and moves from previous characters and performances. She finds her niche and stays there, which is not in any way a bad thing. Mr Reynolds tones down the wildly funny act for an earnest likeability that really works to his advantage in this movie. When the inevitable happens in The Proposal it does so in a gentle, human way and enough laughs are provided along the path to happily-ever-after to make it all seem brand new in a way.

Let's face it, nobody goes to watch romantic comedies for the wild new advances in filmmaking technology or the experimental storytelling. A few laughs, a few romantic moments, a couple of awkward musical interludes, that's what we expect from romantic comedies.

The Proposal provides the comfort of a fairytale, updated with strippers, a little comedic nudity and bodily function humour just so that we remember what century we're living in. And to answer the question posed at the beginning of this piece, yes Sandra Bullock can still pull off a romantic lead role but she ain't no sweetheart no more.