The fact that Transformers made a gazillion dollars at the global box office pretty much guaranteed that a sequel would be fast-tracked to theatres so that the studio, director and stars could make another fat wad of cash to tide them through these difficult financial times.

So that Badshah of Bombastic Booms and Bangs, Michael Bay, gets to hang out behind a megaphone and imagine another adventure featuring those dueling alien robot races -- the Autobots and the Decepticons. Of course this is a sequel, which means everything has to be bigger and better. They got one half right, everything is bigger in this movie.

Now if we must consider any background at all, it appears that a covert group of American soldiers have been working with the Autobots to root out whatever Decepticons remain alive on Earth after the events of the previous movie. Starscream has assumed command of the Decepticons after returning to Cybertron. Sam Witwicky (Shia LaBeouf) is preparing to go to college, without his hot girlfriend Mikaela (Megan Fox). 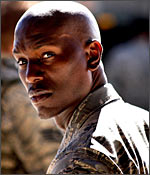 Even though the Allspark was destroyed in the earlier movie, shards of it still exist on Earth. Through a convoluted sequence of circumstances that feel like they were cooked up to fill space between all the fetishistic battle sequences, Sam is made the pivotal figure in the unfinished battle between the warring factions -- a war complicated by the presence of a much older robot called The Fallen (hence the title of the movie reads Transformers: Revenge Of The Fallen).

It is difficult to remember (mostly because one would want to forget) a pivotal figure as annoying and whiny as Witwicky. He doesn't want to get involved with the robots. He can't commit to his girlfriend. He pretends to be better than the conspiracy theory nutjob (Ramon Rodriguez) he shares his dorm room with. He's ambivalent about the college hot chick Alice (Isabel Lucas) who takes an instant, inexplicable liking to him. And he is the one person who can save Earth when Armageddon comes. Only in the movies right? Even in the canon of colossal screw-ups who go on to save the day that is the leading man in each Michael Bay movie, this Witwicky character is hard to beat.

There are new characters (mostly of the transforming robotic variety) and more battles between robots in more ambitious settings. Yet it all looks and feels very 'been there, done that'. People familiar with Bay's work, and action movies in general, will see scenes and shots that recall Bay's own Pearl Harbor, Armageddon, the previous Transformers as well as movies like Desperado (the couple on the run jumping from roof to roof), Predator (the design of one of the newer robots), Pirates of the Carribean (another character design) and way more stuff that I'm just too exhausted to recount.

If Quentin Tarantino is the master of cinematic remixing that arises from a love of celluloid moments then Michael Bay is the disingenuous sampler who hates everything with equal fervour. If one were to maintain a body count of all the people killed in the various attacks, conflicts and face-offs that riddle this film, the number would probably run into very high tens of thousands. If one were to put a price on all the property destroyed the number would run so high it would bring on immediate attacks of vertigo. 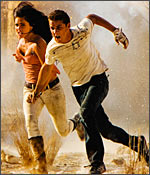 One can imagine the director striding around his sets or post-production facilities going, "I want this explosion/action sequence/fight to be bigger than anything else I've filmed before," and then saying the very same thing for the very next action sequence he puts together. When everything goes bang all the time, the attendant desensitization ensures that audiences merely stare blankly at the screen while planning their snack purchases during intermission.

There are rarely ever performances to dissect in a movie like this and T:ROTF is no different. The leading man looks bored through most of the goings-on in the film. The actors playing his parents look and behave like space fillers; as do Josh Duhamel, Tyrese and all the other men dressed in military fatigues who strut around, contort their faces and fire guns. John Turturro turns in the only acting performance that is enjoyable in any measure throughout this movie. And Megan Fox is just very easy on the eyes.

The trouble with obscenity is that it needs to be seen to be believed. Attempting to dissuade a person from doing something simply by extolling its bad qualities is an exercise in futility. Everyone knows that. Still, movie-reviewers keep attempting to spare discerning viewers the pain of sitting through another bad movie and later swallowing the bitter pill of knowledge that is the reminder that they paid for the displeasure.

Understand this, you have to pay the dentist to cause you pain. You have to suffer unpleasant family members at weddings and funerals. You don't have to watch every big-budget movie of questionable quality that saunters into your neighbourhood multiplex. Way too many people already paid for the screeching cacophony that was Kambakkht Ishq last week. Whereas that movie had two loud leads battling each other in high-pitched robotic performances, this one pitches robots against each other in loud battles. It would be a mistake to repeat that experience, only to relive the splitting headache you left the theatres with last week. The human ears were not designed for such assault.

So do yourself a favour and read a book or something. The sooner audiences stop supporting expensive firecrackers like this, the sooner filmmakers around the world will be forced to think of ways to entertain people that don't consist solely of gratuitous explosions, slow-motion cleavage, confusing digital gimmickry and lame attempts at comedy.

But really, whom am I kidding? You already bought your tickets, didn't you?

Transformers 2: Biggest hit of the decade