If you can't imagine a big budget summer film without seemingly endless adrenaline pumping scenes, the sixth Harry Potter film, being unleashed this week in about 10,000 theatres worldwide, could come as a surprise. Even those who are familiar with the novel on which the new film Harry Potter and the Half-Blood Prince is based may find it a bit surprising that the film has far less spectacular scenes and magical feats than the previous chapters.

The new film directed by David Yates is even darker than the previous installments but it is also has plenty of teen romance. The convoluted plot twists may baffle some who have not read the J K Rowling book but the film is expected to be a giant hit, thanks to the universal popularity of the books. It also offers an atmospheric drama, a few thrilling scenes, and several heartfelt moments too. But many could find the climax a letdown.

The question for the producers is whether the film, which like the latest Transformers cost about $200 million, would make more money than the previous film in the franchise, Harry Potter and the Order of Phoenix. That film, also directed by Yates, grossed over $930 million worldwide in theatres alone, and some $900 million in ancillary revenues including DVD sales and rentals.

The film ends leaving Harry and his two buddies getting ready to end the devastating acts of  Lord Voldemort who has restarted menacing the Hogwarts school and his students and teachers -- not to overlook random acts of violence he engineers. 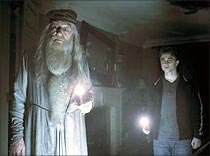 If you really want to enjoy the film, read the book first. Even if you read it some time back, glance through it; otherwise you may get bored and lost quite often, especially in the middle part of the movie.

In the first 10 minutes of the film we find Harry (Daniel Radcliffe) reading a copy of the Daily Prophet in a London café. The newspaper asks: Is Harry Potter the Chosen One? A young waitress is trying to get his attention but soon he's out in the street, summoned by professor and headmaster of Hogwarts school, Dumbledore (Michael Gambon), who reminds him that he (Harry) is needed to uncover a deep mystery and stop Voldemort (who is not seen in the film) from unleashing more havoc.

Amidst the darker corridors of Hogwarts, menace is lurking in every corner. Time is running out fast and Dumbledore -- who has managed to get Professor Horace Slughorn (Jim Broadbent) back to the school -- wants Harry to shake the professor's memory so well that he will remember a crucial encounter with one of his students Tom Riddle that had taken place many years ago. Dumbledore hopes Harry can thus help discover a secret vulnerability of Voldemort.

Yates also makes time in the middle of this ominous mission for Harry and his fellow wizardry students discover a few convenient and inconvenient truths about opposite sex.

Harry starts on what he think is the final assault on the evil Voldemort but those who have been following the movie project know that it will take place in the final two installments of the franchise. 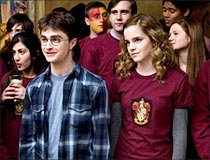 When Dumbledore and Harry embark on the crucial journey, the film gains momentum.

With Slughorn added to the cast, the Harry Potter saga once again relies on the older actors to give it some gravitas. The young actors led by Radcliffe, 19, Emma Watson, 19, and Rupert Grint, 20, are okay at their best. But they are amateurish compared to the veterans. However, even with a sterling performance by Gambon, the script could have made the film benefit much more by giving more strong scenes to other veterans including Alan Rickman and Maggie Smith.

The film's climax is not particularly gripping but it makes the viewers look forward to film based on the last book in the series. In fact, there will be two movies coming out of the single Rowling tome, one in the year 2010 and one a year later.