New York is a sham

I must confess I'm not overtly familiar with America's controversial Patriot Act, so I wonder if I'm going to get into trouble for declaring that I feel the need to trash New York.

The movie, I mean, not the city.

Director Kabir Khan's new film tries hard to make a point, loses it in a weak, seemingly unending plot executed by a group of pretty performers each competing for a Worst Actor Award, and finally ends by spelling the name of President Barack Obama as Barrack. And all this nonsense in a film exasperatingly infatuated with slow-motion, so that even the lousy climax takes a while to kick in.

Shall we talk of plot? Oh, let's not. Suffice it to say that this is a dreadfully weak rehash of Anurag Basu's gripping Gangster, just set in Philadelphia with occasional shots of the NYC skyline to assure us that we're in the titular megacity. It could have been a slick enough potboiler, but somewhere the documentary filmmaker couldn't let go of his 'message,' and chose to clobber us over the head with it, Delhi 6 style.

The film begins innocuously enough, like a standard English potboiler of the television movie quality, demanding that we not take the American talent seriously, and ignore the fact that they smirk or grin whenever facing the camera. We are told about terrorism, the Patriot Act and one of the actors is detained, and from him spins out a flashback showing our three protagonists in college. The Hindi-English dialogue dips to unbearably cardboard levels, and the film remarkably manages to slide downhill from there. 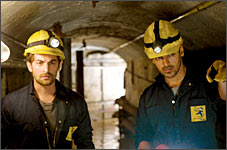 Katrina Kaif is a ravishing woman -- arguably the very finest looker in the industry today -- but is at her best in the song montages, thrilled as she points to Broadway from the top of a bus or chatters about something as she climbs a tree... basically any non-speaking part. And it is a star such as she who is weighed down by unweildy dialogue, dialogue dripping with drama. It's so goshdarned unfair when all we'd rather do is stare.

Neil Nitin Mukesh is a Hrithik-rivalling pretty boy who got raves for his look (as opposed to his work) in Johnny Gaddaar, and rivals Kats when it comes to mouthing words. It doesn't appear to be a coincidence that this film too, just like Johnny, requires his character to pretend to be someone else, thus masking the bad acting as signs of character nervousness, not his own. It would appear, seeing the man fumble the simplest of scenes, that this is something to aid the actor, not the character.

And then there's John Abraham, who clearly likes watching movies. This is an actor growing in confidence and one who clearly enjoys signing on roles he's convinced are 'unconventional,' but emerging confidence isn't necessarily a good thing. 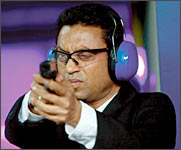 For some reason, the actor's also picked up the Pensive expression straight out of Aamir Khan's book, and it's distinctly unnerving to see the tall and athletic John mope around with an Aamir face. John saunters through this movie constantly preening, checking his reflection in the glass during what tries to be a high-intensity climax and ends up looking like a practice round for Fear Factor. (And Yana Gupta did it better on the TV show, for the record.)

Also walking around, looking utterly disinterested in the proceedings is Irrfan Khan, a true actor doing what better be a strong paycheck role. He's made to play a tough cop who asks a lot of questions, wonder where we saw that before.

New York could still have been a tolerable film if the actors were the only problem -- but the fact is that they are the ones who try valiantly, and are utterly let down by Sandeep Srivastava's shoddy screenplay. It starts like an unnecessary B-movie, goes into standard Hindi college cliche, and -- following a series of torture scenes that seem gratituous in context with the rest of the film -- degenerated into utter, unforgivable potboiler tripe. And it all features lots and lots of slow motion. Groan.

Maybe Kabir Khan decided that torturing the audience was a method to get them to relate to the condition of illegally detained racially profiled Asians after 9/11... or maybe he thought that a public service advertisement's worth of statistics could actually be stretched into a full-length movie. Either way, this New York is doomed.