Thank heavens whatever happens in Vegas doesn't always stay there.

What works best about Todd Phillips' The Hangover -- and let me say straight off the bat that here is an uproarious adult comedy that well and truly works -- is how unashamed of themselves its jokes are. There are a bunch of truly sadistic, mean-spirited gags dotting the comedic landscape of this film, and while these are jokes most films would try to tuck safely between more innocuous humour, Phillips' star turn as one of the Borat writers steers him blessedly shameless.

In one of the film's most unexpectedly hilarious moments, an effeminate Chinese man laughs at Alan, one of the film's leading men, getting whacked in the stomach. Alan, played by Zach Galifianakis, is a heavily bearded slob who has just been casually called "Fat Jesus" by a stungun-happy Vegas cop, and in this scene Ken Jeong, playing the giggling Mr Chow, hits the nail on the head as he makes us all guiltily wince a little even as we convulse with laughter: "It's funny because he's fat," he squeals. And it is. 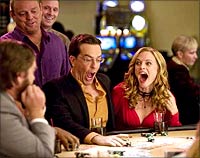 Some things are funny simply because they are funny. There's no two ways about farce, and The Hangover revels in the absurdity of three grown men dealing with truly inane situations getting progressively worse... much worse. The film travels the politically incorrect gamut from Holocaust jokes to stripper gags to Galifianakis' madly naive suggestion that instead of calling Rufalin pills "roofies," they could be called "rapies" because they're the date-rape drug. Yeah, it's that kind of movie, one where you high-five a buddy and then hope nobody from work saw you laugh. But laugh you will, or bite your tongue trying not to.

Set two days before a wedding, the film is about a last hurrah in bright neon city featuring a groom (Justin Bartha), his two best friends Phil (Bradley Cooper) and Stu (Ed Helms), and his fiancee's brother Alan, who we've already spoken about. The friends clamber aboard the roof of the inevitable Caesar's Palace hotel, down a few shots of Jagermeister, and set out to party hard.

They achieve this, as is evidenced by a complete loss of memory, an excessively trashed hotel suite, Stu's broken tooth, and a Royal Bengal Tiger in the bathroom. And as Phil, Stu and Alan discover, they are still a party of four except there's a baby on board the mayhem now while the groom has vanished into thin, potentially-lethal Vegas air. As they seek a hooker who is purportedly the child's mother, "It's got, ah, Ted Danson and Magnum P.I. and that Jewish actor," mumbles Alan vaguely, trying to remember the name of Three Men And A Baby. 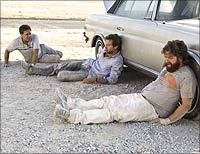 For a film running on the steam of its protagonists and more or less disjointed gags, The Hangover hangs persistently from its core narrative thread, something that impressively culminates in us developing genuine affection for these characters, in our wanting to see them through to the end. It's impressive because these are pure stereotypes -- a stud bored with his marriage, a dweeb rushing into a bad one -- and yet, thanks to the fine lines of dialogue and the performances, we give a damn.

It is easy to dismiss The Hangover as just another pottymouthed R-rated romp about men who don't grow up messing around, but there is an earnestness to the proceedings that takes this to say, a Super Troopers level, something that gives the movie heart. And it helps that the writing (by Jon Lucas and Scott Moore) is so tight even Mike Tyson manages to be funny.

There are missteps, certainly -- the stungun scene far outstays its welcome, there's more than a bit of coincidence in the film's final epiphany, and it needed more than a cameo from Heather Graham, playing Jade the stripper -- but which mad, drunken night goes exactly as planned?

This one doesn't, and proudly so. And while the night is reconstructed bit by bit as they stumble around Vegas, Phillips remains strong and doesn't give us a flashback of what happened, giving us hints and letting us form our own versions of what might, nay, what must have been. And just when we think it's over, he tosses snapshots over the end-credits, forcing you to stay put and continue laughing, half-horrified.

Go for it. It's a bromance to remember.