Hats off to you, Nandita Das

Oblivious to its brutal job description, an impassive truck monotonously carries a pile of dead bodies and dumps it into a ploughed ground. Unlike an iron-made carrier though, the hands that bury those corpses are trembling with dread and disgust.

If only it were as simple as the disparities between man and machine. If only those bodies were not the outcome of limbless loathing and unbridled rage of man against man. If only religion was a way of life not a means to murder.

In Firaaq, crisis takes an indiscriminating stand. It affects everyone. From a regular school kid missing out on his classes owing to an unpleasant season of communal riots, which took place in his city not more than a month ago to the little lost boy in search of his 'Abu,' having witnessed the mass slaughter of what he used to address as family once. 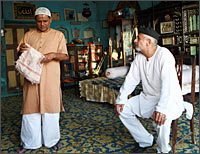 The gravity of loss is monumental to those directly affected. But it has a way of creeping into the lives of bystanders as well.  In her very first and exceptionally powerful display of directorial and writing (co-writer Shuchi Kothari) skills, Nandita Das translates the language of fear and its dialects through the medium of human emotions and their striking dissimilarity while confronting the same horror, namely, Gujarat carnage in 2002.

Chronicling the aftermath of a tragedy, Firaaq, during its course of 24 hours unfolds the story of several lives, which have been permanently altered, challenged, damaged or scarred by the aforementioned-chain of events. Redemption, defeatism, escapism, scepticism, idealism, opportunism, antagonism, retribution, disappointment are running themes of its interrelated yet disjointed narrative.

What makes Das' composition of neatly spread out, multiple story-lines even more effective and credible is her conscious refusal to play upon the intricacy of the religion-based discord. There's not a single attempt to sensationalise a fact or judge any 'side.'  Everybody is merely an individual grappling with a situation in a way he or she knows how to.

There is much poignancy in the manner Deepti Naval's submissive housewife negotiates her guilt of previously failing to rescue a riot victim by trying to make amends in abandoned Mohsin's (at times passed off as Mohan to stay alive) life. 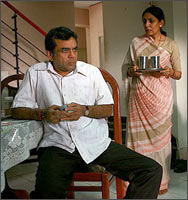 You can't help but smile dryly at Naseeruddin Shah's musically-inclined Khan Saheb innocuously holding on to the virtues and archetypes of a dignified, golden past or express disdain at Paresh Rawal's Sanjay for his wretched sense of practicality and corrupt schemes.

It's almost heartbreaking to watch how strife can give rise to the ugly head of suspicion even in the time-tested friendship of Muneera (Shahana Goswami, a compelling blend of fiery and vulnerable) and Jyoti (an entirely believable, awe-inspiring performance by Amruta Subhash) or create awful circumstances and awkward questions for/between a married Hindu-Muslim couple (Sanjay Suri, Tisca Chopra convey the distress of their characters with earnest conviction).

Also, the futility of violence and the cycle it instigates is conveyed, almost like a dark fable, through the sub-plot of a bunch of revenge-thirsty characters.

While Hyderabad, where Firaaq has been primarily shot, lends its outward texture the raw realism and disorderly character it asks for, Gautam Sen's meticulous, intense art design, Ravi K Chandran's masterful camera-work, Sreekar Prasad's vigilant editing and Rajat Dholakia-Piyush Kanojia's unobtrusive, temperate background score collectively contribute in both creating and questioning a argument and chaos of the corollary of conflicts. The same compliment should be passed on to its extremely resourceful, delivering cast as well. Firaaq's eclectic assortment of actors' spring life and authority to the parts they play ensuring they are recognisable and relatable at once.

Ultimately, however, Firaaq does not romanticise or dwell upon the science of hope. While some may heal, others still don't have an option. And so you leave the theatre with a discomforting and haunting image of a clueless, orphaned Mohsin, still in search of his 'Abu' to cope with.