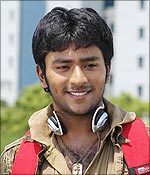 With a name like Siddhu (Plus Two First Attempt), it's not difficult to understand exactly what the basic premise of this Tamil movie is going to be: unadulterated, youthful fun.

Add Shantanoo Bhagyaraj to the mix, and you know that makers Moserbaer and KBR Medias are hoping to resurrect his career. With Dharan pitching in for the music, here's what the audio has to offer:

A melodious mixture of guitar and piano notes wafts towards you in Poove Poove, reminding you of Fool's Garden's eternal classic Lemon Tree and Yuvan Shankar Raja pitches in with his vocals. It's not as nasal as it usually is (though he still messes up the pronunciation), and the violin interlude that follows his rendition is very pleasant indeed, with touches of classical music, interspersed with Latina exclamations.

Na Muthukumar's lyrics make you smile, after quite a long time of repetitive sentiments. The charanam -- where Chinmayi participates -- descends into a familiar pattern, but the second interlude, with its touches of Irish flutes, is again, pleasant. It might be an oft-heard melody, reminding you of certain romantic classics in places, but it's still an appealing number.

Money Money has been written and tuned by Babu Shankar, and you wonder if the refrain, heard so often lately, is going to be yet another synthesized music-cymbals-clashing blend of beats. And it is. Benny Dayal and Reshmi contribute in yelling "Do it!" at us at regular intervals, interspersed liberally by thumping rhythms. The second segment offers some variation but though it isn't unpleasant, it's not great stuff either, following set patterns.

The sound of liquid pouring and glasses tinkling sets the tone for Kelu Kelu, as Kanja Karuppu and Co initiate a drunken conversation and, as expected, it follows hard on the heels of a mishap in love. The tune takes you right back to the halcyon days of Ilaiyaraja's ditties, and for an instant you're transported back in time. Haricharan, C A Raja and V V S Maniyan do the honours with respect to the vocals to Amudhamani's lyrics, which are colloquial, simple, and try to be both angsty and hilarious at the same time. Not a bad combination, but it gets a bit tedious when you keep listening to the familiar refrain of girl-bashing. There follows the mandatory urumi melam and folk beats, and its back to the hero repeating his woes.

This time around, it's Thaman who has scored the music for Gundu Chattikkulla, and you can see the influence of the rather neat album Sindhanai Sei, as Ranjith launches with enthusiasm into a peppy tune. The instrumental arrangement is appealing, even if the vocals are a shrill accompaniment most of the time; it's the rhythm that keeps you jiving. Naveen and Rahul Nambiyar pitch in for the chorus, while Amudhamani has penned the lyrics. You guess that its one of those hero-chasing-after-heroine songs with plenty of group action.

"A classic -- and at the same time, progressive," comments a voice in a somber tone, but it's hardly the classic you've been looking for. It's the remixed version of Naan Alaana Thamarai, from K Bhagyaraj's movie, Idhu Namma Aalu. Not a particularly brilliant number from his movies. A lascivious mixture of erotica and just plain front-bencher antics, and its here for only one reason: titillation.

Dharan's work is a combination of what youthful music signifies today: wannabe-peppy, and enthusiastic. Barring a few moments, it tries, but rarely is scintillating. Sometimes, the instrumental arrangement makes for a pleasant listen, but overall, the effect is familiar. Worth a listen once.