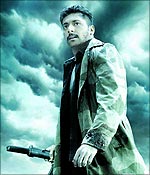 The first emotion you feel when you see an impressive (if slightly cheap-looking) computer-generated satellite at India's premier space research station is that Ayngaran International's Tamil film Peraanmai, directed by S P Jhananathan (who gave us E and Iyarkai), is going to turn out to be a super-impressive movie.

At least the trailers featuring Jayam Ravi's neat physique, twirling guns and ropes certainly lead you to hope so.

That's until you move beyond the introductory scenes, where you're shown an Indian satellite named Pasumai (which, in itself, doesn't gel), launched for the benefit of agriculture, with all the suitable paraphernalia of scientists milling around, calling press conferences and addressing the nation with self-importance.

Meantime, there's a tiger-hunt going on near the station, in the jungle (details of which you're never shown, except for a random shot of a tiger growling), while anxious tribal people sit around their huts, waiting for some sort of miracle to happen. Naturally, the miracle-doer is none other than Dhruvan (Jayam Ravi), a tribal golden boy who's risen through the ranks through dint of sheer hard work to the post of forest officer. How he defeated the tiger (which is dragged pathetically to the village) is unknown but he's the hero, and that's it.

Then there's a bus-load of girls from the Rosa College (which elicits a giggle from the audience), journeying to Velli Malai for an NCC camp, led by Sister Victoria (Urvashi in a role so bland you wonder why she even opted for it). They're bossed around by a brat-pack of five: Jennifer, Kalpana, Thulasi, Ajitha and Sushila (Kadhal Saranya, Varsha, Tanushka, Adhisaya and Liyashree), who mimic everyone and generally are the "bad girls" incarnate. In a not-so-strange twist of fate, they run into an almost-nude Dhruvan on their way, who's helping the villagers deliver a calf. His robust physique sets them all snapping photographs -- and after a round of risque comments, they return to their college, only to be told by officer Ganapathi Ram (Ponvannan), that Dhruvan will be their trainer.

In scenes that seem a straight lift from Chak De! India, Dhruvan tries to train the girls; the brat-pack immediately dislikes him (his caste is supposed to be the real bone of contention.) You're left trying to decipher dialogues that are censored every five minutes (to loud protests from the audience) while even Ganapathi Ram, the senior officer himself, goes out of his way to taunt Dhruvan for his boorish ways and treats him worse than an animal (scenes which, again, are incredibly artificial).

The brat-pack goes out of their way to oust Dhruvan, one of them walking around nude (!) at night, so as to trap him into a rape and assault scheme which backfires (exactly which college permits this behaviour from its girls is never answered.). Meantime, Dhruvan decides that the brat-pack will accompany him on a one-day tracking trip within the reserve forest, as they are the ones "who won't co-operate and need to learn more." 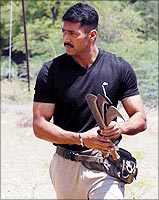 Nothing wrong with that logic, except that this is where the real insanity begins. If you thought the first half hour was trying, the remaining minutes are sheer torture. The five girls raid the local shop for condoms, wear designer clothes, make lewd jokes and make Dhruvan (and you) extremely uncomfortable. Dhruvan responds by reciting incredibly long monologues about the country, its agriculture, economy, security, patriotism and the need to die protecting it -- by which time, you feel the girls are justified in riling him up, as you're squirming in embarrassment. The sentiments might be noble, but who can stand to hear paragraphs of lectures when you're hiking in a supposedly "dangerous" forest teeming with wild animals?

As if all this were not enough, there appears Anderson (Roland Kickinger, the new Terminator following Schwarzenegger's departure) with his posse of horrible actors:  the villains. Our intrepid, dialogue-crazy hero and five girls decide to take them on, to the accompaniment of Vidyasagar's screechy background music, Rambo style, armed with just rifles and pistols, and torn clothes.

This time, the audience erupts in genuine laughter.

That's an emotion you have to contend with often, in this staccato-style movie which tries so hard to be serious that it has the opposite effect. There are so many "inspirations" from well-known Hollywood blockbusters that it's embarrassing; equally cringe-worthy are Ravi's dialogues which go on forever, his tedious explanations about everything and repeated refrain of "never letting foreigners win."

Which is a pity, as he's obviously put his heart and soul into this role. He's trim, fit, packs a mean punch and brings a sincerity to his role that is endearing. He's part of the reason you can even sit in your seat. The other reasons are the great locations, and Sathesh Kumar's brilliant cinematography, bringing a zip and spark to the screen where none exists in the screenplay.

The stunts score as well. The five girls have tried their best, running around in torn clothes and sporting bruises but their characterisations are wooden; you can predict every emotion a mile away. Not to mention their dialogues, which are nauseating.

A movie like this thrives on characters that knock against each other, and new emotions emerge but S P Jhananathan has thrust so many platitudes, morals and politics into it that it ends up being inadvertently hilarious. It's a script that looks good only on paper, filled with good intentions but hopelessly flawed.

'Peranmai is not gender specific'