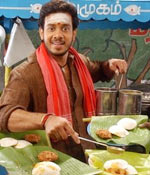 Every once in a while, just when you think Tamil cinema is taking a step in the right direction with serious scripts and different formats comes a movie like Kool Productions' Arumugam. The film destroys any faith you might have in creativity and execution. When the culprit in question is Suresh Krishna, veteran of commercial blockbusters like Annamalai and Baasha, there doesn't seem to be any hope left.

With a cast like Bharath, Priya Mani, Ramya Krishnan and a host of other regulars, this film should be on its way to becoming a runaway hit. So why isn't it? Here are a few reasons:

1. Rehashing the entire script of old tried and trusted hits (like Annamalai) will not work. The hero Arumugam (Bharath) is dressed up in oversized shirts with a towel wrapped around his middle. Instead of having him sell milk, he's an idli-vendor. Of course, Arumugam faithfully imitates the Superstar Rajnikant's lingo, hand gestures and body language until he has the audience squirming in their seats.

2. Making him have a friend like Annamalai's Sarath Babu. Here, it is Karthik (Aditya), a rather washed-out looking guy, meant to reflect the upper class. The rich Karthik, for no reason, is somehow poor Arumugam's closest friend. Getting the poor cinematographer S K Boopathy to add deepening sun-rays for effect don't really work either.

3. Getting Saranya Mohan to play Mallika, Arumugam's sister, yet another washed out character whose apparent purpose in life is to hike up her pavadai, moan about her brother, serve idlis and run around with nothing to do. When will someone give this pretty girl a chance to act?

4. Roping in National Award winning actress Priya Mani to play the silly Yamini, Arumugam's love interest. Why would a rich father marry his daughter off to an idli-vendor, no questions asked, is a million-dollar question. Add to that the fact that Yamini has never even seen Arumugam, only corresponded to him through letters (in this day and age) and you have the silliest romance of the century.

5. Adding, in an attempt to ape the cult-classic Padaiyappa, yet another version of Nilambari -- this time, it's Malini Devi, essayed by Ramya Krishnan, looking sensuous as ever, but also bored out of her wits. She's haughty, beautiful, willing to do anything to thwart Arumugam because the young man foiled her lofty ideals for her brother Karthik's marriage. The way she retaliates would make you shriek with laughter. She's a carbon copy of Nilambari and exists for no purpose but to let Arumugam have the screen space to ape Rajnikanth's body language. The rest of the cast isn't even worth talking about.

6. In addition to all the above reasons, there's Deva's music, borrowed, rehashed and boring as ever, while Premgi's dialogues are terribly clichéd and lack any substance.

What is really puzzling is why the cast chose to act in a movie (no matter how long ago that was) that's so devoid of any logic or charm that you can barely sit in the theatre after half an hour. An ever bigger mystery is why Suresh Krishna felt the need to come up with a half-baked storyline culled from several different Rajni movies, and serve them up to his audience. In fact, you wonder if he really did direct this film at all.