The Great Indian Butterfly is an honest attempt 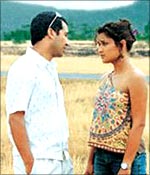 English films made in India are more often than not a scary proposition. They are written with the western audience in mind, tend to be pretentious and harp solely on the grime and poverty over and above the storyline or the plot. In this scenario The Great Indian Butterfly comes as a relief. The film has been made for an international audience but chooses to focus on the lives of a young DINK (double income no kids) couple who due to adverse circumstances are forced to question the very basis of their existence.

Mira (Sandhya Mridul) and Krish (Amir Bashir) are a yuppie couple who have spent the last few years of their lives climbing the ladder of success. They are supposed to take off for their much-needed annual vacation. But a stressed out Krish goofs up and they miss their flight. Since they are unable to obtain fresh reservations at short notice they decide to travel the entire distance by road. This vacation is especially important for Krish as he has been searching for The Great Indian Butterfly. This butterfly can only be found in the remote Cardiguez valley in Goa. If found this insect will bring immense happiness to the captor.

Does this butterfly really exist? Or are Krish and Meera involved in a senseless search simply to avoid thinking about the vacuum in their own lives. During the course of their journey, we get a voyeuristic look into their existence. Apart from Mira and Krish there is just Lisa (Koel Purie) Krish's one time girlfriend. Is he still involved with Lisa? Does he plan to dump his wife at the first opportunity? Or is Krish as confused as Mira?

They have been spending so much time apart, this forced proximity becomes difficult for both of them to handle. A film with no definite storyline and the complete absence of additional characters is not an easy proposition even for a veteran director. And this is Sarthak Das Gupta's maiden venture. But it is entirely to the director's credit that he manages to keep us involved in the couple's lives.

Mira and Krish share a fairly typical 'married couple' relationship. The stresses of the work place have completely infiltrated their personal lives. So they tend too let loose on each other. Then they apologise. They struggle to get things right. But a few minutes later the slanging matches begin all over again. A real relationship in every sense of the word 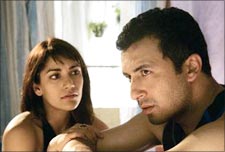 The script isn't entirely cliche-free and does adhere to conventional thought patterns. Still it's an interesting attempt which works most of the time. Barry John has a small role which ideally could have been a lot smaller. The audience isn't stupid or unintelligent that the central idea of the film should be thrown at them every 15-20 minutes.

The narrative flows mainly due to the spirited performances by the lead pair. Most especially Sandhya Mridul! A versatile actress, she's almost always cast as the tough, I-don't-give-a-damn character. But she also reveals a softer side to her personality. She conveys her pain, her grief as effectively as her brashness. Over the years she has developed a fantastic figure and looks hot through most of the film.

Yet she unhesitatingly faces the camera with minimal make-up, tousled hair and in a crumpled nightshirt. Something even our veteran actresses hesitate to do...

Matching pace with her is Amir's calmer and restrained performance. But he's a fine actor too.

Koel Purie doesn't have much to do but she's convincing .Since the film has been shot in Goa, they've used non-actors for small inconsequential roles. And they tend to stare into the camera or smile at each other. One of the occupational hazards of working with amateurs!

The dialogues are crisp, witty and sprinkled with F-words. Under no circumstances should this film ever be viewed on TV so many words will be edited out It would be difficult to make sense of what is left. It's a film for multiplex audiences and is best seen there.

The film was shot almost three years ago going by the cell phones and laptops we see in the film. But it doesn't look dated.

Absolutely a must for those who've liked Sandhya Mridul in her earlier roles. Or those who thrive on tales of marital strife. For the rest there's always IPL.