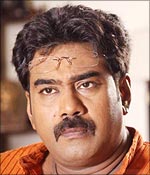 The happiest moment for a anyone who likes good films will be watching a sincerely made film that is emotionally riveting and plausible.

That's what we felt while watching the Malayalam film T D Dasan Standard VI B, a simple film the protagonist of which is yet to reach his adolescence. The film is about his efforts to reconnect with his father who had abandoned him when he was just a toddler.

The story occurs against the backdrop of a village that is fighting the might of a multi-national cola company that has squeezed its natural water resources dry.

Dasan (Master Alexander) who is studying in the sixth standard finds the address of his father in mother Chandrika's (Shwetha Menon) trunk. So, he secretly writes a letter to his father. He wants to silence the class bully who is always teasing him for being fatherless.

But, his father (who worked as a driver) has moved on. A new tenant -- Nandan (Biju Menon), a top notch ad filmmaker, a single parent staying with his teenaged daughter Ammu (Tina Rose) and an elderly caretaker Madhavan (Jagadeesh) are staying in his place.

Nandan requests the caretaker to find out the whereabouts of the person and deliver the letter to him. But Madhavan is not that enthusiastic and the letter ends up in the waste bin. Ammu sees this and feels bad about it. She picks up the letter and makes an effort to find the addressee but fails. Meanwhile a second letter arrives. Ammu feels pity for Dasan and replies pretending to be his father. Thus begins the exchange of letters between the two.

Director Mohan Raghavan, who is also credited with the writing, makes this tale multi-layered. Before the exchange of letters begins, he establishes that Ammu is a talented writer with a vivid imagination by showing that she has won a gold medal in a short story competition. 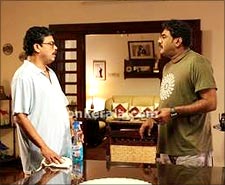 The other thing that strikes us is the fact that the letter also makes Nandan's imagination go wild. He consults his scriptwriter friend to develop a story for a feature film based on the letter without knowing the progress Ammu has made. This becomes the best part of the film with Nandan and others imagining scenarios about Dasan's father and trying to profit by it while his daughter makes a sincere effort to give happiness to the boy.

The treatment of this film resembles the Iranian master Majid Majidi's style with children being the centre of the narrative yet the film is targeted at adults. The fable- like quality works well without making us think about the implausibility of the situation. The credit for this should also be shared by the two kids. It is their spontaneity that ultimately wins the day.

The rest of the ensemble cast is just the support system that the two kids require to march forward.

In the final analysis; we can say without doubt that T D Dasan Standard VI B, directed by newcomer Mohan Raghavan is miles ahead of the films that are served in the garb of entertainment week after week, and leaves us with a sense of elation. A brillaint effort indeed!