Dulha Mil Gaya... and then what went wrong? 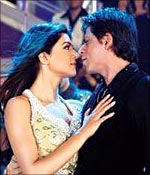 Mudassar Aziz's maiden venture Dulha Mil Gaya has finally been completed. It's always important to give first-time directors a little leeway for errors. Direction may not be rocket science but debut projects often has some raw edges.

Mudassar was lucky enough to cast Sushmita Sen and Shah Rukh Khan together. These two nearly set the screen on fire with their sizzling chemistry in Main Hoon Na.

DMG also stars Fardeen Khan and veterans like Johnny Lever and Parikshit Sahni. With such a talented cast the least one expected was a fun, watchable film. Unfortunately, DMG reminded me of a film which keeps taxiing down the runway but never really takes off.

The film opens in Trinidad with a spoilt brat son, who hopes to inherit millions from his deceased father's estate. But Tej Dhanraj, also known as Donsai (Fardeen Khan), is in for a rude shock. He has just a few days time to marry Samarpreet Kapoor (Ishitta Sharrma), a girl from rural Punjab.

This is a theme which was hugely popular in romance novels and movies in the 1960s and 1970s. The director could have kept us engrossed by taking the story to a new level. But Mudassar Aziz sticks to the tried-and-tested. Samarpreet remains the 'sati savitri' type, who will go to any lengths to woo her husband.

But this Herculean task cannot be managed single-handedly. So Samarpreet receives help from Shimmer (Sushmita Sen) and Pawan Raj Gandhi (SRK). Shimmer is ashamed of Donsai's behaviour. She hopes to reform him but fails to realise that she is equally commitment phobic. Mudassar in text-book fashion introduces his characters in the first 30 minutes and then for the next two hours, the film keeps plodding its way towards a dreary, predictable end.

All the characters in the film are flat and one-dimensional. Fardeen Khan, the playboy, has fared well in comic situations with his earlier hits such as Heyy Babyy and No Entry. But his performance here can't be compared to those. He has gained a lot of weight and appears bloated in most scenes. The weight gain hasn't just affected his appearance; his gait too is more suitable to that of a middle-aged man rather than a dashing playboy.

Newcomer Ishitta Sharma appears convincing as the soft-spoken rural Punjabi girl. Unfortunately, she lacks the oomph factor which is so necessary for her character in the second half of the film. Despite this obvious flaw, she remains one of the most convincing characters. 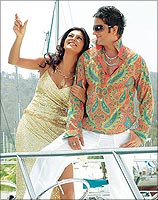 Sushmita Sen seems to be earning more and more flak for herself these days. This is probably her worst performance till date, maybe with the exception of Zindaggi Rocks. The verve and the zest, which has always been such an intrinsic part of her personality, seem to have disappeared. The same eyes, which oozed sensuality, now emanate a sense of fatigue and boredom.

Watching Johnny Lever on screen has always been a treat for his fans. But he appears in a blink-and-miss role here. It seems such a waste for an actor of his calibre. But obviously, the director thought differently.

Shah Rukh Khan is a man who has always obliged his friends. Producer Vivek Vaswani had helped SRK find his feet when the latter was a struggler. But SRK is completely wasted in the film even though he tries hard to liven up the screen with his presence.

SRK plays a millionaire whose only desire is to see Sushmita smile. There is one sequence where he jumps off a cruise liner to rescue a toy dog. In one word: absurd.

Even to the untrained eye, it's obvious that the film took many years to be completed. There are scenes where Sushmita Sen and Fardeen look slim. And in the very next sequence, their physical appearance changes drastically. An experienced cinematographer can easily avoid these pitfalls; this is not the first film which took over three years to be completed. But the lighting and cinematography is easily the tackiest one has seen in recent times.

The West Indies and Trinidad are scenic and breathtaking. These locations haven't been used too often in our films. But no film has ever managed to sustain itself on the basis of its locations.

Watch the film if you can't think of any other way to spend your weekend. Or else just avoid.