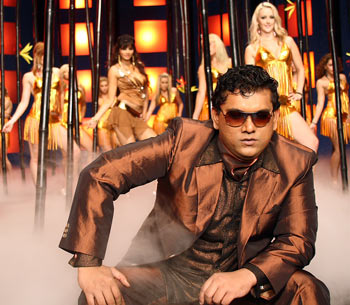 Upcoming film Shadow may look like a regular Bollywood August release. But the film is, in fact, very unique because its lead actor is blind.

Nasser Khan was born blind in Kanpur. But he did not let his handicap overtake him. With the help of special magnifying glasses, Nasser studied computers. He is the first blind man to get a Microsoft certification, and clear all papers for Microsoft. He joined his father's leather business, and also learnt other things like repairing electronic items.

He opened a computer institute but recession forced him to shut it down.

Now, Nasser has stepped into Bollywood and will produce and star in his first film, Shadow. He takes Nithya Ramani on his journey through life.

A friend works in the movies in Orissa. I had gone to visit him on the sets of a film. When I saw the procedure, it looked very simple and I thought I could do it too.

Many warned me against this idea but I was confident that I could do it. I have a cousin, who is struggling in the Hindi film industry. I approached him and met directors through him. I narrated my story idea to them.

It was certain that I was going to produce the film, act in it and script it. I needed a writer to write the screenplay. I decided to rope in Rohit Nayyar for the job.

The first day of shoot was in Bangkok. We were shooting the whole day and didn't even get one shot right. It is very easy to emote naturally but very difficult to do that on camera because you become very conscious.

Everybody was angry with me though they did not tell me anything on my face. But I could figure out by their reaction and repeated takes. I felt bad that the shoot was getting delayed because of me.

I was always on the sets, listening to people and their performances and learning from that. Before I gave my next shot, I did a lot of stunt sequences to get camera friendly.

'Learning how to dance is even more difficult than doing stunts' 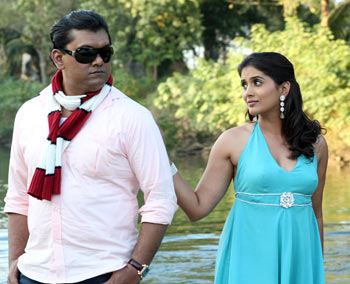 How did you manage the stunts?

I was very scared. It's not easy to do stunts -- especially the one where I had to come out of the water on a ski boat. Though all precautions are taken, it was very difficult to that stunt. I was waiting for that day to get over.

I haven't seen stunts in my life so I don't know how they are done. But I made up my mind to do it. I did not use any body double and did all the stunts myself.

I got clear directions from Rohit and the stunt director as to what and how I am supposed to do the stunt. They kept telling me when I should jump, when I should run or get out of the water. Rohit likes to take long shots without cuts. All of them were very apprehensive about letting me do the stunt because they didn't want to take risks. But I insisted.

We heard you injured yourself while doing some of the stunts.

I fractured my leg while doing a stunt and because of that, the film got delayed. I was very scared to do the stunts. Learning the stunts is very difficult. Learning how to dance is even more difficult.

Why was dancing more difficult?

I would take me a long time to learn dance steps. I had to feel the choreographer's hand to see how it was moving and at what pace. Even simple steps would be very difficult because I have never seen dance in my life so I don't know what the usual jhatak and matak is. I practiced dance for nearly two months and then shot it in two days.

I never favoured dancing in the film. I didn't mind making people dance but I was averse to it. But Rohit somehow made me dance to four tracks.

'I will take Hrishita Bhatt to court' 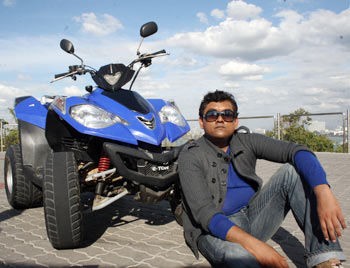 How easy or difficult is to be a film producer and actor?

Saif Ali Khan will a better person to answer that. Being an actor and a producer is a very difficult job. But I managed, as I am a very strict and shrewd businessman.

What did you have in mind when you wrote the script?

When I wrote the script, I just wanted to make it entertaining. I didn't want it to bore people. Especially when people know that a blind man is acting, they shouldn't get bored. My film sends across a message that a blind man can do anything, just like a man who can see.

I met everyone in person and whoever found it exciting was in. I wanted well known faces but nobody agreed. Everybody was concerned about who they are working with. The director is a well known person but the banner is new. Nobody wanted to venture into it. Their reputation was important for them.

The cast were very helpful. The only person I didn't meet was Hrishita Bhatt and she was the spoiler. She worked just for the money and left without being a part of the film's promotions. She didn't come on the promised dates. We had to struggle a lot to get her to come and act. I will take her to court. She can't take me for granted. I won't let her take me for granted. 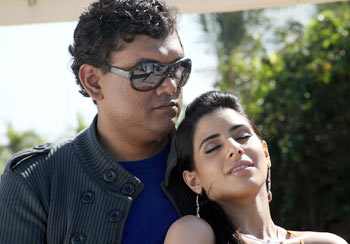 How did you manage to to rope in Salman for the film promotions?

Once you enter the industry, it is easy to make your way. With the help of friends and others, I approached him. He was more than willing to come for the film's music launch. He is a very nice man but all said, if I had approached him to do the film, I am sure he wouldn't have agreed. I didn't have sources to go to him initially. I needed someone who could help me get to him. In the beginning, I knew no one.

You haven't watched any film. How then did you know what to do and how? Did you have a walkie-talkie or a ear piece through which people would guide you?

No. Since our films are always dubbed, there is no tension as to how much you shout during the shooting. The director and the crew give me directions as to which side I should move, whom I should look at and deliver my dialogues. I have a person who tells my dialogues to me and I memorise it.

As far as watching films are concerned, I watch them through my ears and heart. Rohit says that I understand films better that those who can see. When we watch a film together, I would point out a mistake even before he did. I have really sharp ears. Even on my phone, I have set it such that whoever calls, I get a voice notification.

The same goes for important papers and documents. I have an equipment that reads the document word to word and after listening to it, I sign it. I am technically very sound.

'I am not expecting great profit from Shadow' 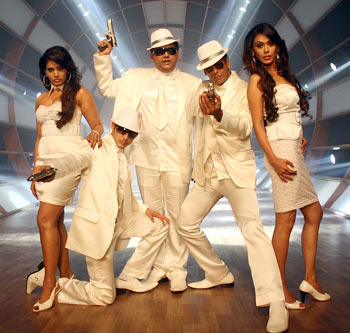 How is your family reacting to your foray into Bollywood?

They are very supportive. They have always been supportive as I have always done what I've said I will. Parents, brother, my wife and my nine month old daughter are very happy about what I am doing.

I was sure of what I was getting into. I have always delivered what I have said. My family trusts me completely, and know that I will succeed. I am a self-made man. I have put my own money and nobody has a problem with it.

How do you think people will react to this film?

According to me, a film is a product and being a businessman, I know how to sell my product. I want it to be the biggest hit of the year. I feel it will do really well.

I wasn't able to release it in theatres before because no one was willing to buy it. But after the promos were out, they came forward to buy it. It took us about six months to finish the film, out of which the shoot took us about 100 days. I spent about Rs 16-18 lakh on this film and I am not expecting great profit from it. Even if I just break even, I am happy. I will earn in profit in my next film.