The making of Saif Ali Khan 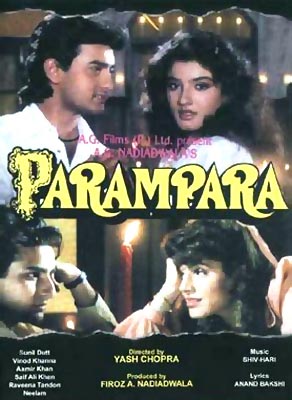 No journey has a point if it doesn't get you anywhere. And that's what makes Saif Ali Khan a steady rider. Despite the ups and downs, he kept going -- steadily, sincerely. That is also what makes him a success story. rediff.com traces the actor's remarkable trip to the top.

Despite his famous lineage (Father-Mansoor Ali Khan Pataudi, Mother-Sharmila Tagore), Saif Ali Khan's entry in films was no walk in the park. Originally slated to make his debut opposite Kajol in Rahul Rawail's romantic thriller, Bekhudi, the newcomer found himself unceremoniously replaced by another aspirant Kamal Sadanah.

Luckily, filmmaker Yash Chopra took notice and signed him on for Parampara. Only this archaic saga of strained blood ties and avenging Thakurs was already crammed with too many stars -- Aamir Khan, Vinod Khanna, Sunil Dutt, Raveena Tandon and Neelam -- for anyone to sit up and take notice of this sprightly Winchester lad.

To add to his woes, the Chhota Nawab was ridiculed for pretty much everything -- floppy hair, angrez accent, effeminate looks, lousy acting skills, the works. Taking all the nasty criticism in stride, Saif, with his classic humour and easygoing persona, continued to work towards doing bigger and better.

The strategy worked with a disadvantage. Though his performances as the charming skirt-chaser in Yeh Dillagi and method actor in Main Khiladi Tu Anari showed sparks of a potential comic, a considerable share of the box-office credit for their success was attributed to his co-star Akshay Kumar in both films.

Playing it safe, the actor mostly worked on two-hero potboilers or multi-starrers like Surakshaa, Pehchaan, Yaar Gadaar, Tu Chor Main Sipahi, Imtihaan, Kachche Dhaage and Keemat. None of these action capers, however, did anything to substantially further his career. 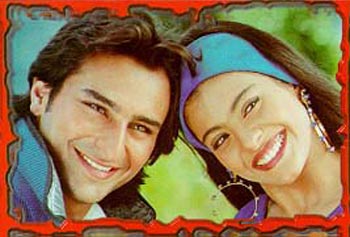 Unlike other Khans on the block -- Aamir, Salman and Shah Rukh, Saif was nowhere close to the prized A-list.

With the failure of the lavishly-staged rebirth romance Hameshaa co-starring Kajol as well as Keemat, which reunited him with his co-star of two major hits -- Akshay Kumar, Saif's career hit an all-time low.

No wonder he agreed to take up dumb parts in dumber movies like Aarzoo or make a hardly special appearance as Sushmita Sen's now-you-dump-me-now-you-don't boyfriend in Biwi No 1. 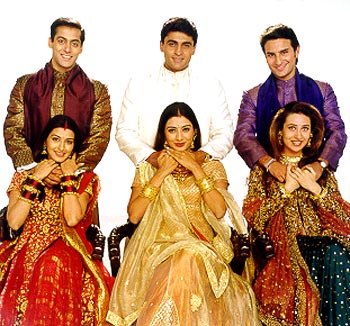 Just when you thought he's out, Sooraj Barjatya pulled him back in with his modern-day Ramayana, Hum Saath Saath Hai. Despite the presence of Salman, Tabu and Karisma Kapur, Saif stood his own playing a well-mannered yet fun-loving product of a traditional, joint family.

The good run continued with Kya Kehna. Even though the Kundan Shah melodrama was primarily focused around Preity Zinta and teen pregnancy, the suave star did well as the responsibility-shirking jerk. Ditto for his funny turn as a man who instigates the kidnapping of his own wife in E Niwas's Love Ke Liye Kuch Bhi Karega.

Although what truly turned the tide in his favour was Farhan Akhtar's hip and cheeky portrayal of Gen X in Dil Chahta Hai. As the perenially in-love Sameer, Saif was an impossible combination of attractively daft and irresistibly cute.

Comic yet subtle, the actor walked away with some of the best lines and scenes in a caper otherwise dominated by Aamir Khan's larger-than-life coolness. 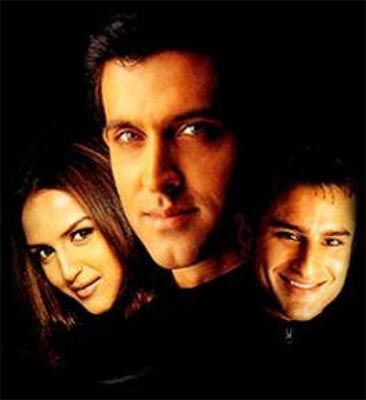 Okay, without doubt, this man could act. So what was he doing playing second fiddle to juniors like Hrithik Roshan and R Madhavan in forget-me-now brand of love stories -- Na Tum Jaano Na Hum and Rehna Hai Terre Dil Mein?

Nothing succeeds like success in Bollywood (or elsewhere) and so Saif, unable to deliver a mega hit on his own, settled for quite a few hopeless carrots dangled his way.

And while there's nothing spectacular about his roles in these films, Saif flaunted his new, improved physique to good effect. A good pack of six/eight never hurt, right? Om Shanti Om and Ghajini, anyone? 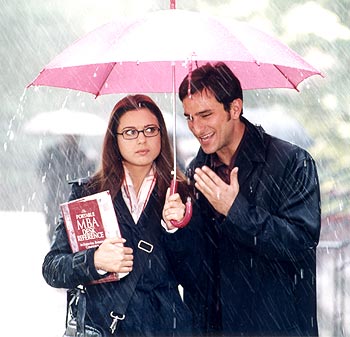 His ability to tackle humour without resorting to in-your-face, impeccable timing and reactions to co-stars as well as an inherent ability to convey a lovable cad worked fabulously while essaying Rohit Patel in Karan Johar's Kal Ho Naa Ho.

While his partner-in-camaraderie -- Shah Rukh Khan got all the obvious sympathy, Saif's contribution was equally acknowledged. Providing the perfect understatement to SRK's exaggerations, he made the jokes work and ensured the laughs were real.

Needless to add, everyone, except Kantaben, was amused. KHNH's super success widened Saif's viability as a star in the overseas markets as well. And that, as we all know, is always a good thing. 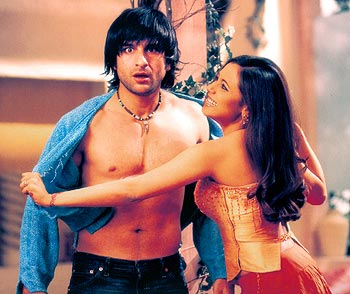 In Bollywood, you haven't arrived unless you've delivered a solo punch.

Confident than ever, Saif did just that with Kunal Kohli's Hum Tum. And while it's seriously debatable if his performance in the same was National-award worthy or not, the actor had clearly made his point.

Nothing beats a hit than two hits and then some. Yashraj Films' newest golden boy struck again with yet another date flick, Salaam Namaste.

Proving there's more to him than a smooth urban image and wooing women in fancy foreign locales, Saif slipped into his polished, classic skin to play the passionate yet egoistical Shekhar in Pradeep Sarkar's Parineeta.

His understated yet fiery delivery impressed both the critics and cash registers. The dramatic improvement in his performances from Parampara to Parineeta was nothing short of awe-inspiring. And yet no one was remotely prepared to be blown away to the extent they did after a viewing of his simply put -- brilliant acting in Vishal Bharadwaj's Omkara.

Once assured he's the right man for the job, Saif immersed himself in the darkness of Langda Tyagi's convictions. Be it shaving off his hair, sporting stained teeth and scruffy outfits, perfecting the nuances and body language of a rural rogue, the actor transformed into Langda Tyagi and astonished one and all. No exceptions.

A career best effort, no doubt, Omkara won him tremendous accolades and respect in creative and commercial circles. 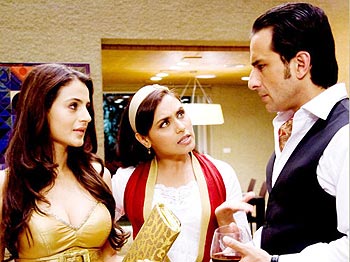 Which is why it's particularly annoying to watch him endorse mediocrity like Thoda Pyaar Thoda Magic, Race and Tashan.

While his painfully stiff expressions in Kunal Kohli's awful attempt at giving Bollywood it's very own Mary Poppins evoked neither pyaar nor magic, fans were slightly more tolerating of his stylish stubble and stable-guy sexiness in Race.

Meanwhile, Tashan was far too occupied capitalising on Kareena Kapoor's wafer-thin frame and Akshay Kumar's winning streak to do anything for Saif or his over-enthusiastic moustache. 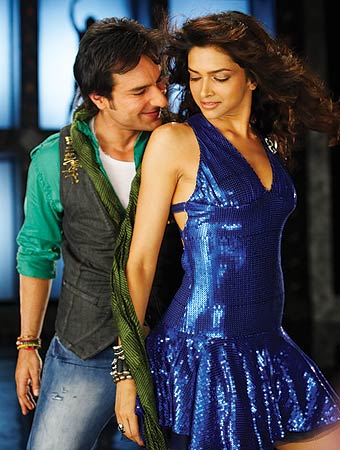 Like many of his colleagues, Saif, too, has progressed to production under the banner of Illuminati Films. And so far it's proved to a beneficial decision.

His debut as a producer, Love Aaj Kal, directed by Imtiaz Ali and co-starring Deepika Padukone, Rishi Kapoor and Giselli Monteiro is making waves at the BO in India and abroad.

Up next, he's gearing up to play a troubled terrorist in Rensil D'Silva's Qurbaan and Sriram Raghavan's Agent Vinod. Sounds promising, right? That's Saif Ali Khan for you!