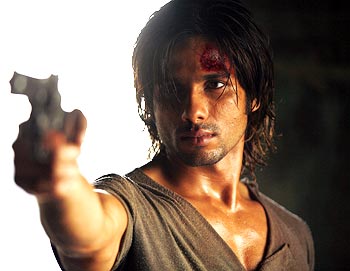 In a story, there's no point being good without the existence of bad. Not only does it lend structure to an otherwise linear morality but also reveals the layers of the ever-confusing human psychology.

And that's why every hero, to be a hero and to prove a point, needs to fight an antagonist -- a corrupt, vile creature from head to toe a threatening snake near every ladder.

They call him a villain. Bollywood calls them 'Kaminey.'

Vishal Bharadwaj's latest treat, with its promising title and exhilarating soundtrack, appears to be a celebration of just that. And so with its leading man Shahid Kapur, yet another chocolate-face sheds some of his cocoa quotient to project evil-for-all-practical-purposes brand of greyness.

Just the time to scoop out the rest of Bollywood's Dr Jerkyll turned Mr Hydes out of the bandwagon, we thought: 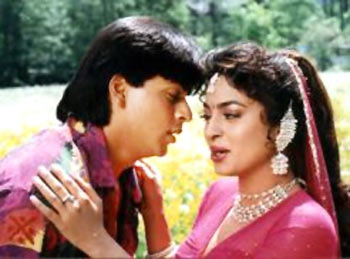 Image: A scene from Darr

For a guy who drags his feet all the way from London to Punjab to win the heart of his prospective dulhania, Shah Rukh Khan is outrageously sly as the obsessive Rahul in Darr and double-crossing Ajay/Vicky in Baazigar.

In Darr, he stutters his way to disruption while wrecking havoc in the lives of a newly married couple, K-k-k-kiran in particular. Whereas in Baazigar, the man goes all out. This translates to shoving off his girlfriend off a multi-storied building or going on a killing spree of all possible witnesses. 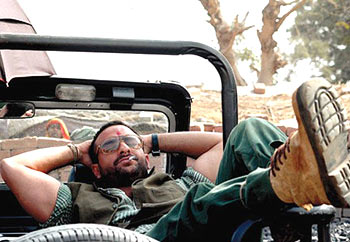 Image: A scene from Omkara

One doesn't associate a typically sweet 'n' suave Saif Ali Khan with murky crimes and heinous plotting. Directors Sriram Raghavan and Vishal Bharadwaj make this most of this perception to their script's benefit in Ek Hasina Thi and Omkara.

Playing the perennial gangster in gentleman's clothing, Saif sweet talks a gullible Urmila Matondkar into unwittingly become his partner in crime as well bear its brunt, in prison no less.

On the other hand, as Langda Tyagi, an unkempt, foul-mouthed North Indian alter ego of Shakespeare's creation Iago, Saif treads upon the darkest side of human psyche, laying seeds of suspicion, misunderstandings and treachery between his mates leading to irreversible tragedy and regrets.

A complete departure from the frothy imagery of his previous works, the afore-mentioned avatars, Omkara in particular, established the star's reputation as a powerhouse performer. 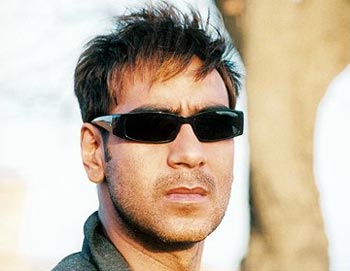 With his brand of intensity and devil-may-care aura, playing nasty seems the next best thing to do. Instead Ajay Devgan transformed into a picture of uprightness with roles in Hum Dil De Chuke Sanam, Zakhm, Lajja and The Legend of Bhagat Singh.

For this reason alone, it's especially fun to watch Devgan, suffering from a split-personality disorder, unabashedly scowl and spurn at his clueless victims in Anees Bazmee's Deewangee, an otherwise forgettable rip-off of Primal Fear if not for the compelling performances by its lead cast (co-starring Akshaye Khanna, Urmila Matondkar).

Unlike the glowering Tarang of Deewangee fixated on a certain Ms Matondkar, the deceiving cop-turned-devious criminal Angere of Khakee has no qualms about bumping sweetheart Aishwarya Rai Bachchan to save his crafty skin. 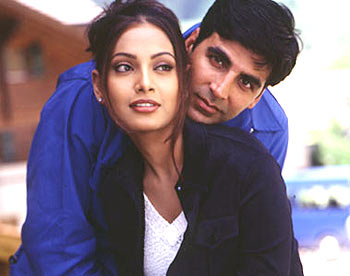 Image: A scene from Ajnabee

As the greedy rogue in the garb of friendly neighbour-next-door, Akki makes a winning impression on the quintessentially trusting Bollywood pati-patni (played by Bobby Deol and Kareena Kapoor) only to use them as pawns in his pursuit for big bucks.

While the Kinng unquestionably rocks as Happy Singh, it was a welcome break to watch the hunk at his humorless best in this take-it-with-a-pinch-of-salt genre of filmmaking. 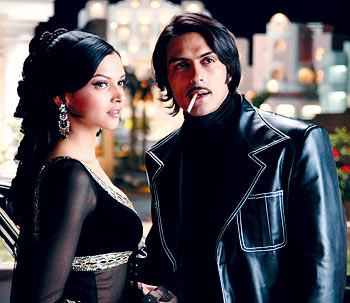 He loves me? He loves me not? To Deepika Padukone's horror it's mostly the latter in Farah Khan's dazzling love song to the Seventies -- Om Shanti Om.

With startling duplicity and rock star hairstyle, Arjun Rampal's Mukesh Mehra makes wafer-thin promises of going public with his closet-wife and soon-to-be mother of his child (played by Padukone) only to set her in flames in order to close the deal. That's 70s brand of creep-dom for you. 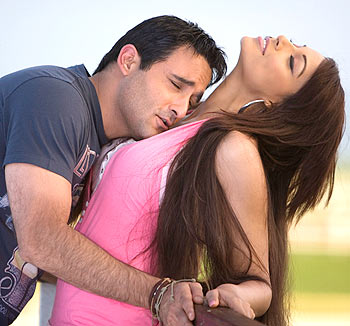 Image: A scene from Race

Only Abbas-Mustan's Race turned out to be far more twisted than its shady protagonists.

As witnessed earlier on, Khanna reserves his mean streak for the director duo. In their previous outing Humraaz, he concocts yet another money-making murder scheme against a bespectacled Bobby Deol to good effect. 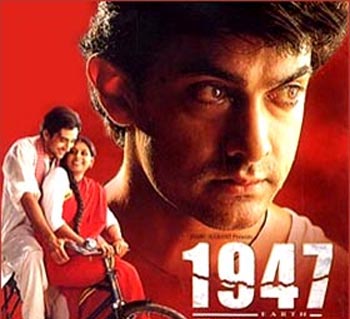 Everyone has had a good laugh over Aamir Khan's cute pranks in a series of entertainers like Dil, Jo Jeeta Wohi Sikander, Rangeela, Ishq or Andaz Apna Apna.

But there's nothing remotely amusing about his dark turn as the vindictive Ice Candy Man in Deepa Mehta's gripping 1947: Earth.

Bitter after the brutal assault on his family, he vows indiscriminate revenge on his enemy religion. Even if it involves torture of his friends or the physical abuse of the girl he claimed feelings for. 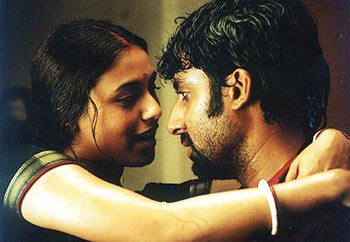 Image: A scene from Yuva

Blinded by his quest for muscle and money, Abhishek Bachchan's Lallan Singh in Mani Ratnam's Yuva, dreams of the good life at the cost of his devoted wife. Jilted time and again by the unapologetically boorish husband, she cries aloud, 'All men are dogs.'

The lanky ambitions, droopy-eyed ferocity and clumsy passions of Bachchan Jr's body language as the power-driven goonda won him laurels as an 'actor' as well as quite a few award trophies in his kitty. 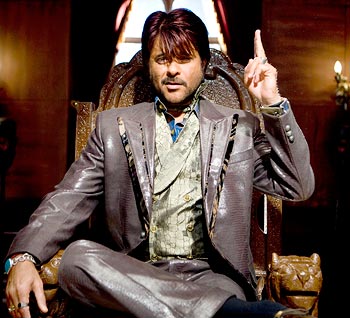 Anil Kapoor's Bhaiyaji is guilty of a lot of dirty deeds in Tashan. And by that we don't just mean his awful English-speaking skills.

In this potential blockbuster gone bust at the box-office, Kapoor, known for his trademark swagger and conventional 'herogiri,' hams, hits and howls in true tradition of a Bollywood villain. 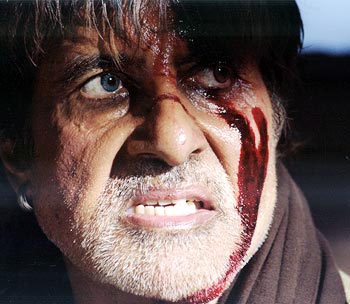 For Gabbar Singh, redemption is neither a requirement nor a reality. Who'd know this better than the Amitabh Bachchan, having watched him (played memorably by Amjad Khan) in close quarters during the filming of Ramesh Sippy's legendary Sholay in the action-packed decade of the 1970s.

Besides being the punching bag of every critic's glove, Aag also evoked negative responses for AB's over-the-top and bizarre portrayal of the iconic dacoit of Indian cinema.