'My curves are the sexiest part of me' 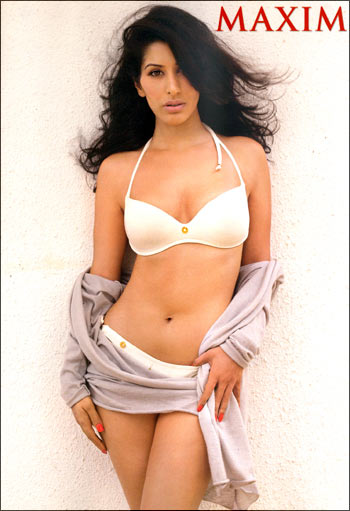 There are few things Sophie Choudry hasn't dipped her fingers in. From being a VJ to a singer, from hosting a variety of award shows to breaking into Bollywood. Her first movie with Zayed Khan was the David Dhawan flick Shaadi No 1, followed by Pritish Nandy's Pyaar Ke Side Effects. Whatever those films were about, we're quite sure they haven't had any adverse side effects on Sophie's career. If you don't believe us, look to the left. Convinced?

So what did you think of the shoot? We had a blast shooting you. No pun intended...

Well I'm glad it went so well and that you guys are pleased with the results. My first shoot with Maxim was absolutely fantastic. I loved working with the Maxim team and Darren Centofanti, the photographer, is a task master!

Some of those poses are darn right painful but so worth it when you see the pics! I have to admit that at first I wasn't sure about the shoot but once I met Darren and Anup [Kutty, Maxim editor] I felt super comfortable and confident about what we were trying to achieve, which was some awesomely sexy and sensual pictures.

'If I'm not gonna feel great about showing off my body now, I never will' 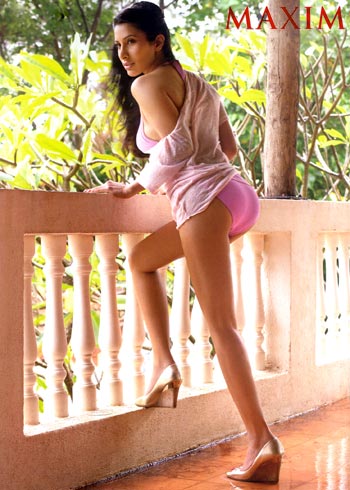 Considering Mumbai is constantly underwater during monsoon, was it fun for you to do this in the rain?

It so turns out that despite the monsoon, I wanted to shoot outdoor so we decided to head to Alibaug. Outfits were decided over two days during which I tried a lot of bikinis... and then I got one of my favourite make-up artists Divya on board.

I could kill the Maxim guys' cos they literally only gave me three days to get into shape but fortunately I have been working out regularly and feeling good... in other words fit, toned and still curvy! If I'm not gonna feel great about showing off my body now, I never will, so I decided to go all out for Maxim! And it was fun!

What do you think is the sexiest part of you?

My curves. The curve of my back, my curvaceous hips and any other curves you guys can think of!

'I don't date men who are still married!' 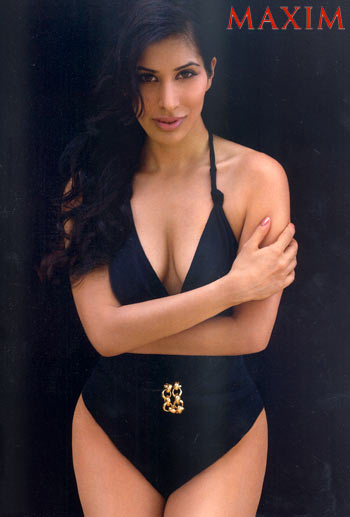 What really happened with Peter Andre at the IIFA awards show in Macau earlier this year?

I don't care how great the chemistry is, I don't date men who are (technically) still married! We had a laugh, chatted over three days, looked insanely hot on the red carpet and made international headlines. That's exactly what happened! (Laughs)

Tell us about your new upcoming movie...

My next release is full on comedy produced by Inder Kumar and Ashok Thakeria. It's their next release after Dhamaal and it's a really fun film. It's called Daddy Cool and is about one funeral where everything goes wrong.

I play this hot girl, Ayesha, who is really desperate to be a successful model. She lands up in the wrong place at the wrong time and causes havoc!!

The music is fantastic and I can't believe we actually got the rights to do the Boney M song Daddy Cool Mad! The film also had me shoot in a bikini for the first time. Me running on a beach in high speed with flowing hair in a hot bikini is definitely something you guys just won't ever forget!

'A simple, rich guy works for me' 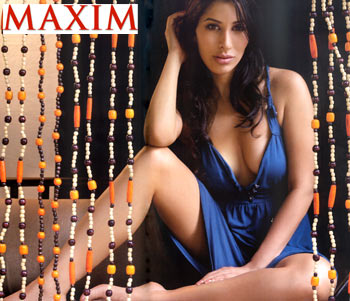 Well when you put it like that, we have to ask you: pick one -- a low on cash, simple guy with a great sense of humour or a super-rich guy with zilch wit.

How about a simple and rich guy with a wicked sense of humour? Now that works so much better for me!

'The Maxim team saw my obsession with sexy footwear!' 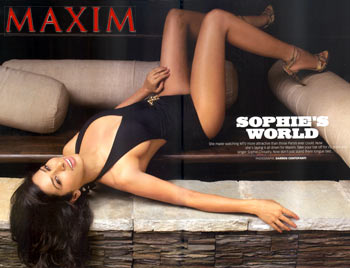 If you had all the money in the world, what would you do?

Ooooh... I can think of many things. I would shop till I drop for myself and my loved ones in London, Milan and Hong Kong!

The Maxim team saw my obsession with sexy footwear! I would go on some incredible holidays all over the world, buy a couple of properties in Paris, the Carribean, New York.

I'd invest well because I'm smart about money, and although I don't want to sound like a Miss World, there are some issues which are really important to me like education of children, preservation of the environment and good healthcare.

I would do whatever I can to help these causes, especially in India. And yes, I would still work. I don't work for money, I work for personal satisfaction and an awesome sense of achievement!

What's the wildest thing you've ever done with a man?

Hahahahaha... You guys give me a cover and want me to "uncover" my secrets? No chance! Nice try though!