The newlyweds of Bollywood 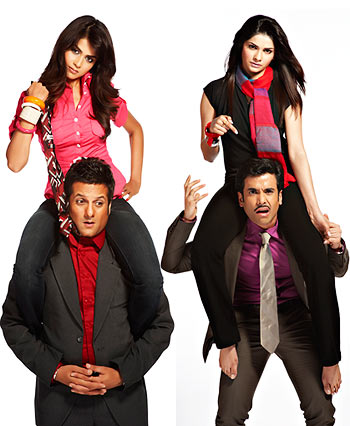 Image: A scene from Life Partner

Getting married is a big deal in Hindi movies. Not only does it provide ample scope for song 'n' dance followed by an exotic outdoor to film the honeymoon, it also sets the foundation for the proverbial twist and exciting turns in the plot.

It could be her nosey parents, his hot secretary, professional rivalry, trust issues or lack of money, our hero and heroine will find something to quibble about.

With David Dhawan's cheeky take on marriage, namely Life Partner, just around the corner, here's a quick look at the portrayal of newlyweds in Bollywood flicks. 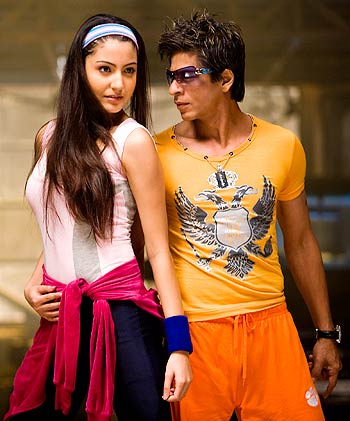 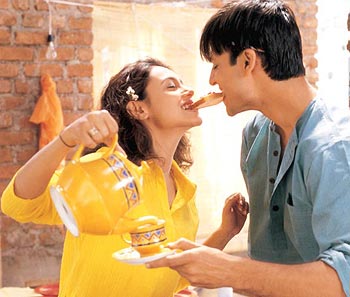 Image: A scene from Saathiya

Despite a lot of parental opposition, rebellious Aditya (Vivek Oberoi) and defiant Suhani (Rani Mukerji) get married in court.

Needless to say, it doesn't go down well with their folks. And so they set up house in a rundown building.

Only setting up paradise in Shaad Ali's directorial debut is tougher than they thought. 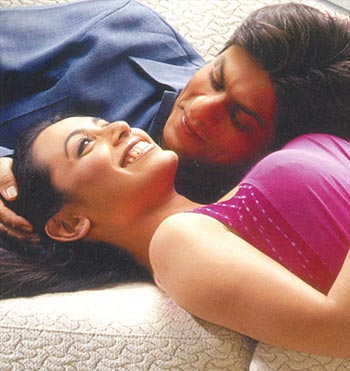 Image: A scene from Chalte Chalte

Shah Rukh Khan's middle-class lad woos a Rani Mukerji's high-society fashion designer all the way to Greece. They get married with much fanfare.

The romance, of course, takes a backseat when social/mental incompatibility takes precedence over heartfelt emotions. 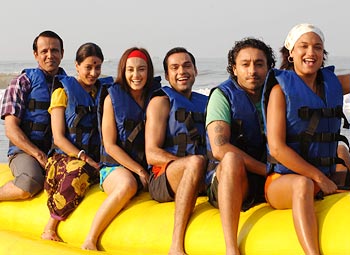 Newlyweds from all walks of life and communities come together to have the time of their lives in Honeymoon Travels Pvt Ltd.

And there's quite an assortment to choose from -- you have mismatched couples, super-powered couples, shy couples, elderly couples, mixed-up couples, all reeling under the bittersweet after-effects of the seven pheras. 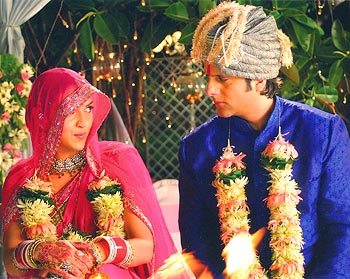 Image: A scene from Just Married

In similar vein, Fardeen Khan and Esha Deol discover the joys and anxiety of arranged marriage, along with a group of other
honeymooners, in Meghna Gulzar's Just Married. 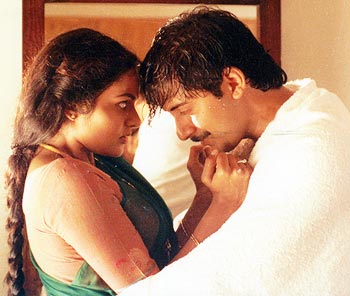 At first, upset over a misunderstanding, Roja maintains an aloof distance. Eventually, she finds out the truth and comes around. Their romance is short-lived when Rishi is abducted by a bunch of militants in Kashmir.

The importance of their commitment towards each other is reflected in Roja's effort to rescue him and Rishi's struggle out. 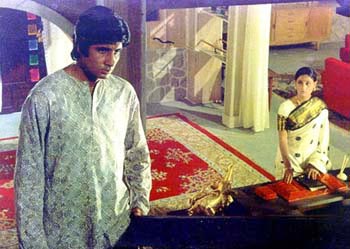 Image: A scene from Abhimaan

Professional jealousy gets the better of a young marriage in Hrishikesh Mukherjee's Abhimaan.

A successful yet insecure singer (Amitabh Bachchan) resents being overshadowed by his talented wife's (Jaya Bachchan) extraordinary success over the same. 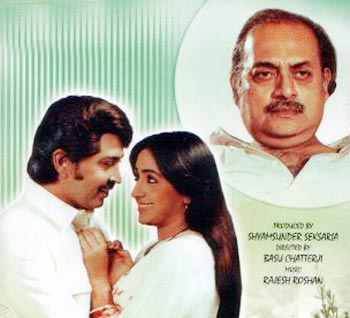 Unable to concentrate on his studies, he sneaks out with wifey to a small-time hotel. Confusion, chaos and comedy follow. 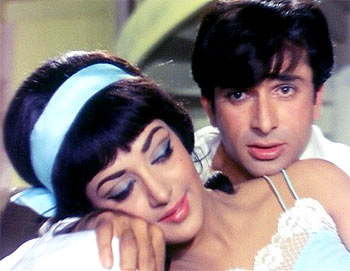 Image: A scene from Abhinetri

A budding scientist (Shashi Kapoor) falls head over heels for a beautiful stage dancer (Hema Malini). Like all good hero and heroines, they get married. And like all Hindi films, things are not hunky dory for long.

Post-marriage, he objects to her dancing ambitions leading to unavoidable differences. Even then, like all Hindi films, they end up living happily ever-after. 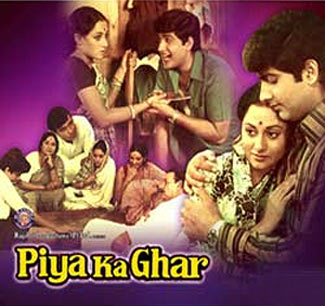 Marriage means a whole lot of compromises and adjustments.

In Piya Ka Ghar, Ram and Malti (played by Anil Dhawan and Jaya Bachchan) experience the struggle of living with a joint family in a tiny apartment.