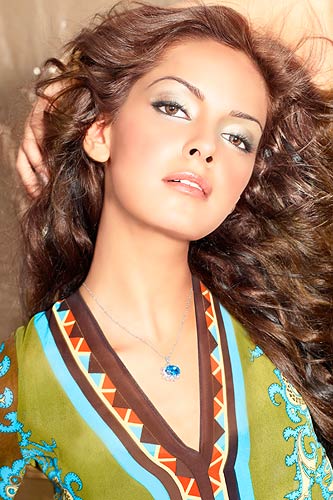 Ranbir Kapoor has found himself a new girlfriend -- on screen, that is.

This may be Shazhan's first film but she is not new to showbiz. Daughter of singer Sharon Prabhakar and theatre personality Alyque Padamsee, Shazhan featured in a couple of ads before she tried her luck in the movies.

Was acting always in the cards for you?

I've always wanted to be an actor. I used to be very shy as a teenager -- very shy of the camera and the spotlight. Whenever my parents would ask me to pose for a photographer, I would hide behind my dad.

But ever since theatre happened two years ago, everything changed. My life changed.

Before theatre, I was planning on becoming a scriptwriter because I like writing. But then I joined the advertising world. I interned with Ram Madhwani [ad man, who directed the brilliant film, Let's Talk], and started training as a copywriter. I did some scriptwriting as well. In fact, I tried many things. But nothing worked out. I guess something better was waiting for me. I realised I wanted to be an actor.

'The first time I performed on stage, I knew what to do' 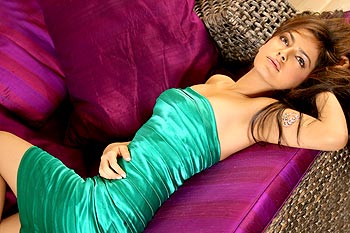 When did you realise you wanted to become an actor?

Two and a half years ago. A friend of my dad's was directing a play and one of the actresses dropped out. He asked me if I would like to fill in for her. I was very shy and refused at first. But I was assured that I did not have lines and just had to sit on stage and read a book. I considered it, and went for the rehearsals. That's when I realised I had to say 90 percent of the dialogue.

My dad and some other people had planned it, so that I come out of my shell and become confident. They knew that I loved imitating people and was an actor at heart. My father is really happy now.

Would you go for your parents' performances?

Yes. I grew up surrounded by actors and creative people brainstorming and rehearsing. I have done a lot of backstage work so I have the knowledge. The first time I performed on stage, I knew what to do. it wasn't hard for me.

'I am horrible at singing' 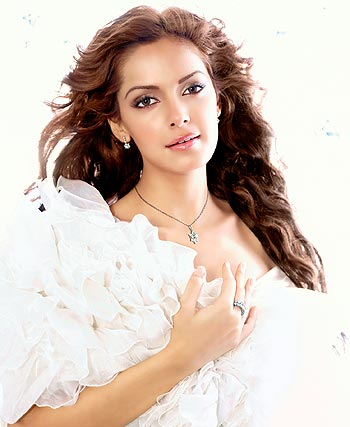 After theatre, films were bound to happen.

Did you ever think of taking up singing like your mother?

Earlier I thought I would sing someday, like mom. But I think I took after my dad because I cannot sing to save my life! I am horrible at singing -- glasses will break if I attempt to sing. Since my dad was a theatre director, I would accompany him. I have memories with my friends when I would direct plays and act in them too.

Mom used to have these elaborate wigs and costumes for her shows. We would put them on and do our own thing. Every Saturday, we would put up chairs and charge my parents and others to watch our plays.

We would do these funny things that were inspired by mom. As I grew older, I didn't want to act so I moved towards advertising.

'Ranbir is a darling' 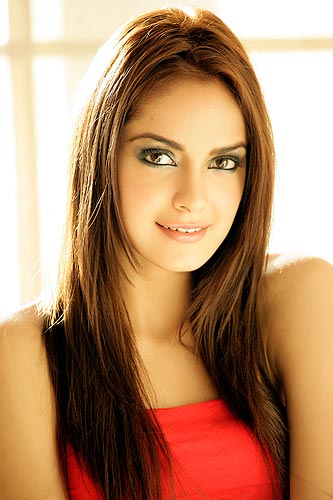 How did you groom yourself for films?

I did a couple of acting courses with [theatre guru] Barry John. I also trained under my father, who is my best friend and mentor.

I did courses on dialogue delivery and Hindi speaking. I learnt kathak for three months. I'm going for Bollywood dance classes too.

I dedicated a year and a half to my training and did a few ads during this time too.

Everyone who knows me has been surprised with my transformation. I guess it is natural for people to go through a shy phase. Theatre really helped me to discover myself. Once I got on stage, I gave it my all and did my best.

How did you manage to bag a Yash Raj Film?

I feel fortunate to have bagged this film with Ranbir Kapoor, who is a darling. He is very sweet and helpful. And of course, the film is directed by one of the best directors, Shimit Amin. I couldn't have asked for a better launch pad. 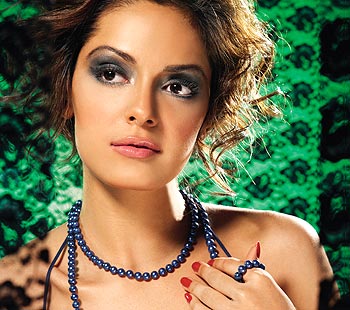 But you were supposed to be launched by Vivek Vaswani. What happened to that?

Vivek is a family friend and we had met up. But the project did not materialise. It hadn't even gone to the script reading stage.

What was your first encounter with the camera like?

It was during the shoot of the Clear 'n' Clear commercial. I worked with director Eden Taylor, who has directed all the Clean 'n' Clear ads all over the world. He was fantastic. The second half of the ad had a girl and me on stage at a rock concert. That was an amazing experience. We shot in Bandra Bandstand [in the western suburb of Mumbai] with many extras. I'm glad my first shoot wasn't scary. I love doing ads.

'I have promised my mom a sports car' 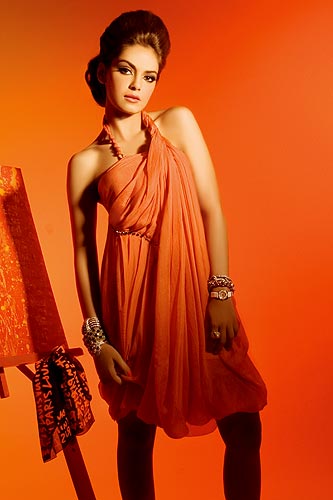 How did your parents react when you told them you wanted to act?

They are very happy and supportive. They weren't shocked, as they have been with me through the process.

I call my mother momager -- meaning, mom plus manager. She is always working things out for me. This is her life now. She wants to see me up there. I have promised her a sports car or whatever she wants. I am definitely going to get her that very soon.

What are your siblings up to?

Quasar and Raell are both into theatre. They have their own productions and are doing very well. We all support each other completely.

Did you consult them about your film career? 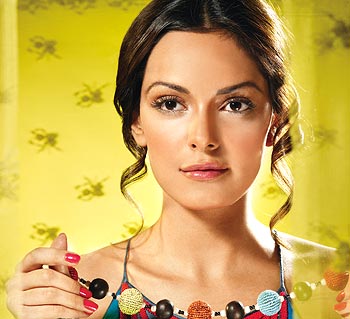 What is it that you look at when you choose a script?

Choosing a correct production house is very important because they will ensure that you get visibility. A proper launch is very important as the life span of an actress is short. Of course, the role is also important. Not to forget the co-star. A combination of everything makes a good choice.

Do your parents accompany you to your shoots?

No. They haven't even come for my ads. I am very independent. I don't need people around me to protect me. Not yet.

Any childhood memories with your famous parents that you can share?

I have a beautiful beach house in Alibaug. Dad and I make it a point to go there once a month. It's paradise. Since dad always wanted me to be an actor, we would play dumb charades before. Now we go there to discuss my profession. It's fun as it away from the commotion of Mumbai.

'I am open to anything' What kind of films would you like to do?

I am open to anything. I would like to do an art film but not right now. Things work very differently. Later, when I look for powerful and meaty roles, I will try that. I am only 21 and have time on my side.

How difficult was it to learn Hindi?

Very difficult. I am a south Bombay girl, who went to a Parsi school and spoke only English at home and with friends. But my Hindi is good now.

'I miss being on stage' 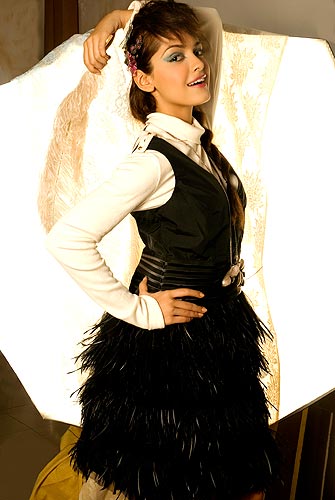 Who is your favourite actor/ actress?

Robert De Niro, Jack Nicholson, Jody Foster, Meryl Streep and Amitabh Bachchan. After Ghajini, I respect Aamir Khan a lot. He is so dedicated. From the new generation, there is Ranbir Kapoor and Imran Khan.

It is great to be a part of this generation. Wonderful films are being made. Imtiaz Ali's Love Aaj Kal and Kabir Khan's New York are great films. This is a good time to be in the film industry.

Has theatre taken a backseat because of films?

Yes. You need to dedicate three months for plays and right now, I don't have that kind of time. I miss being on stage. 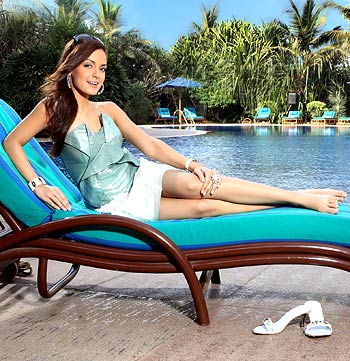 How open do you think is the industry to newcomers? Does being a star kid make it easier?

No, that's a misconception. I am not from a film family. It was as hard for me as any other newcomer. I have gone for as many auditions as people my age have gone for. I have had my ups and downs. I have been confirmed and promised but things haven't happened. I have had my share of struggle.