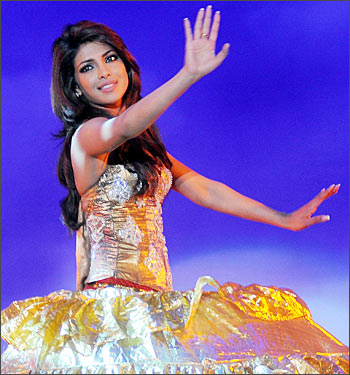 Towards the end of our conversation, as she prepares to leave for another appointment to promote her films Kaminey and What's Your Raashee?, actor Priyanka Chopra says candidly: "I'll say one thing about the films that I prefer to be associated with; I don't negate the economics of films."

She adds, for good measure, that "I don't believe in films that audiences watch in film festivals or their drawing rooms. In that sense the economics of films is very important."

Though I'm not entirely in agreement with her views, it is fascinating to find that one of the most successful stars of Hindi commercial films is not shy about making such strong statements.

"I believe in the power of the box office," she emphasises, when I ask her what she would make of films like Parzania, Black Friday, or, for that matter, Firaaq, which tackled real issues faced by real people in real India? She pauses before she answers, but then says firmly, "It's my belief [that I should] be part of intelligent, unconventional cinema that is also commercially viable. Kaminey, I think, will prove to be an example of that."

'I've done twice the number of films compared to Shahid' 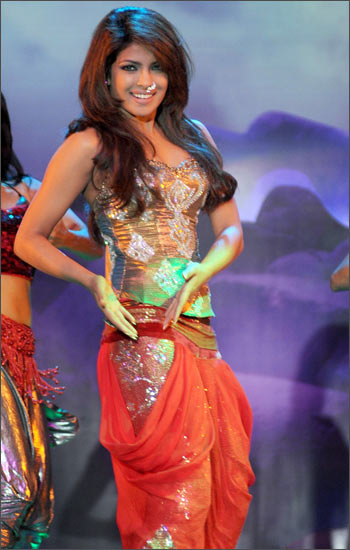 It's been two weeks since Kaminey released and, as Chopra had predicted (our interview was conducted before its release), the film has been garnering accolades critically and commercially. What's more, Chopra -- despite her small role in it -- has been getting a lot of praise too.

"I was concerned about the length of my role in Kaminey but Vishal Bhardwaj [the film's director] was convinced that I should essay the role of Sweety. He simply said, 'Please trust me to pack a punch in your character.' I couldn't refuse," she says with a smile.

Considering the number of films that Chopra has done, one would think that Chopra's been a part of the industry for a long time. Not so. She's been acting in films for five years -- the same as Shahid Kapoor, her co-star in Kaminey -- but, by her own admission, "I've done twice the number of films compared to him." 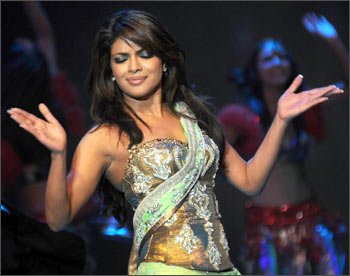 How has the journey been for the girl who was, as she says, "plucked out of 12th class to participate in a Miss India contest?" Being just 17 years old then, Chopra admits that her start in the field was difficult. "It helped that my parents -- both are doctors -- had so much faith in me. Actually, they sent my photographs without my knowledge. I was busy studying to be an engineer," she adds, laughing.

After she won the Miss World crown, Chopra continued to "go with the flow", and Hindi films beckoned. Since she didn't belong to any filmi khandaan, didn't have a godfather, didn't have any experience, her way of selecting scripts was unusual too.

"It helped that I was -- and still am -- a voracious reader. I used to love going through scripts that came my way and imagined what it would translate to if I was an audience member. I think that strategy worked, and that's my criterion for selecting films," says Chopra.

She admits that there have been mistakes too: "I can misjudge if I think only of my part, my role and whether it'll do well." However, she goes back to the economics of cinema ("That's what the business is at the end of the day," she says sharply) and adds, "For me it's important to know whether the producer can back the director's vision and the scale at which the film has been imagined."

'The higher up you are, it only gets tougher' 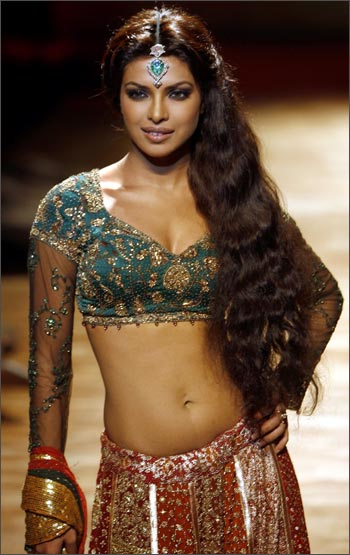 For someone who has had an immensely successful year ("It was a clean sweep as far as awards go," she says, happily) with films like Fashion and Dostana -- and now, Kaminey -- doing well at the box office, Chopra, who is one of the top female actors in the industry, has been in the news for all the wrong reasons as well. Her exhaustion, fainting spells and poor health have been reported in great detail in the media. What's more, there were also reports of how tired she had been looking lately while promoting her films.

"Being an actor is a huge responsibility, and the higher up you are, it only gets tougher. If I decide to stay in bed and miss a day's shoot, 150 people on the sets don't get paid. If I miss an event, people label me 'irresponsible'. I can't do that. That's the reason why I never took a break," she explains.

It is, in fact, ironic that, in a male-dominated industry, she's finding scripts which are written specifically with her in mind. While What's Your Raashee? will have her essaying 12 roles in one film, Pyaar Impossible, it is said, banks on her star power to give Uday Chopra's career a fresh start.

For now, the going should only get better for her.

'I never wanted to get into showbiz'

You're such a big star today. What is your success mantra?

It's been destiny and a lot of hard work. I never think of what will click and what won't. For me, every film that I do is my Mughal-e-Azam.

Before you entered the industry, what was your impression of Bollywood?

I never wanted to get into showbiz. My plan was to be an engineer. I came from an academic family -- my parents are doctors -- and thought that actors were very different people who came from another planet altogether.

What has the industry taught you?

You can be clawed down if you stop being successful. It's important to succeed at every step. That's what eventually matters.

How important was cinema when you were growing up?

Cinema was a means of entertainment. I was a huge Shah Rukh Khan fan and very time I did well in my studies, my parents treated me to an SRK film.