'Doing Amitabh's make-up in Paa was a nightmare' 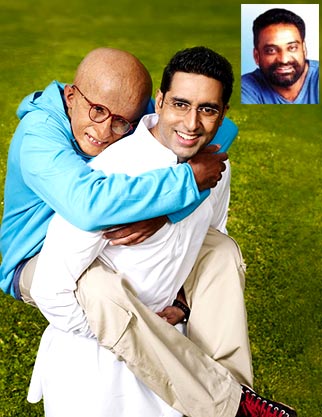 After making Cheeni Kum with Amitabh Bachchan, director R Balakrishnan aka Balki has decided to explore a completely different genre. His new film Paa will not see the Big B but rather, will see a 'Small' B. Amitabh plays a 13-year-old child suffering from the rare medical condition Progeria, where the victim ages rapidly.

Balki tells Patcy N how he made Paa possible.

What made you decide to make a film on Progeria?

I did not think of making a film on Progeria at all. I wanted to make a film where Amitabh would play Abhishek's son. I discovered Progeria along the way.

Why did you want Amitabh to play Abhishek's son?

I had gone to Amitji's office once and saw him talking to Abhishek. Abhishek was talking very wisely and Amitji was playing the fool. That made me think how a role reversal would look if Abhishek played Amitji's father.

I thought of making a fantasy film with this idea. But I also wondered if I could make a real story, if there was any medical condition that would help this story. I spoke to doctors and learnt about Progeria. Quite a few movies have been made on this so I did not want to make another one on it. Instead, I wanted to concentrate on the father-son relationship.

Did you find anyone with this condition?

I called a friend whose son had some hormonal imbalance problem. He put me through to a pediatrician, who told me that only 30 Progeria cases have been registered in the world. There is no treatment for this. I did not want to meet any cases personally because it would intrude into their privacy. The film talks about this intrusion of privacy too.

'Doing Amitabh's make-up was a nightmare' 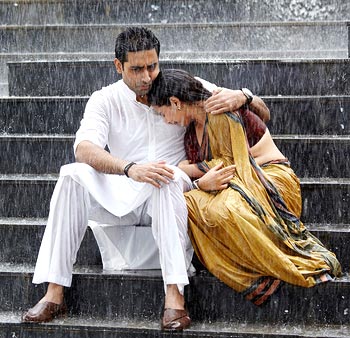 How did you manage to make Amitabh look like Auro?

We first shortlisted Stephen Dupuis (who has worked in Hollywood films like Milk and Mrs Doubtfire). But our shooting dates got pushed ahead. So we roped in Christien Tinsley (Nutty Professor II: The Klumps, How The Grinch Stole Christmas, Memoirs Of A Geisha and I Am Legend ) and Dominie Till (Lord Of The Rings trilogy).

They first created a mould of Amitabh Bachchan by pouring rubber solution on him. Then they made the skin with latex and painted veins on that. Making the mould is a one-time process but the skin had to be painted everyday. That takes about four-five hours. Doing that make-up was a nightmare but Amitabh did it without any complaints.

How did you convince Amitabh to wear such make-up?

I asked him to go bald but Amitji did not agree on that, as he was shooting for other films simultaneously. But he did trim his goatee very close.

How did Abhishek manage to carry Amitabh?

That was a very spontaneous scene. I found a beautiful garden at Cambridge University, and I asked Abhishek whether he could carry his father. He said yes and picked up his father with ease. 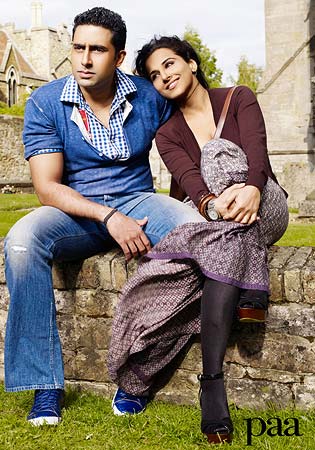 What kind of audience is your film targetting?

Everybody, who watches movies because it's a hardcore Indian family drama.

The film is about three characters. The illness is a small part. Auro knows about his illness and that he will live till 14 years only. But he does not give a damn and lives life to the fullest.

Do you think the audience will accept Amitabh as Abhishek's son?

The audience will accept everything as long as you don't bore them. When you watch this film, you will forget that it is Amitabh Bachchan after five minutes. You will only remember Auro.

When you first told Amitabh that he would play Abhishek's son, what was his reaction?

Amitabh was more excited than I was. He is a big motivator. He's very creative too and takes risks.

Why didn't you take Aishwarya instead of Vidya Balan?

I did not want to make it a gimmick and make Aishwarya play Amitabh's mom. The audience would have thought that it's a family role reversal. But it's a father-son story where the mother plays a important role.

Vidya is an outstanding actress. She is young so she can be bratty and mature at the same time. 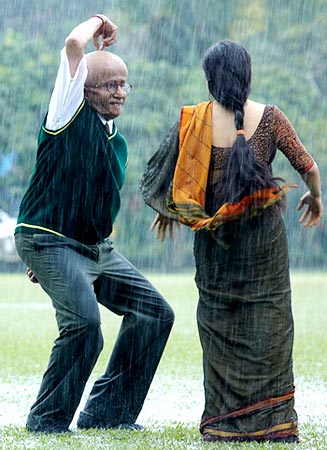 Amitabh is one of the film's producers. Was he interfering at any point?

No. I would have not agreed to him being the producer if he was interfering. In fact, he was more involved in Cheeni Kum than Paa. A film has to be a vision of a filmmaker and writer.

I had worked with Abhishek on the Idea ads, so they were not strangers to me. If they offered a suggestion, I would hear it. Amitji had some fantastic suggestions, so I would listen to him. Abhishek is very intelligent too.

Do you think people will accept Amitabh's monkey dance?

People will not accept or reject anything if you entertain them properly. If a film makes one laugh, cry or think, people will love it.

It's my job not make Amitji look like a buffoon when he does the monkey dance. I think I have done a good enough job there.

'I am one of Amitabh's million fans' 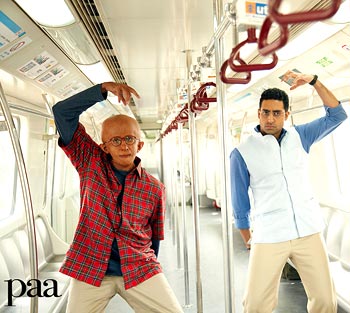 Any interesting incidents during the shoot?

There was an incident in Malaysia when many children came to see Amitabh Bachchan. They stood for three hours on the sets but could not find Amitabh even though he was sitting right in front of them. They just did not recognise him.

What if people don't recognise Amitabh in the Paa promos? Won't that go against the film?

Most people know it is Amitabh, only few may not be knowing.

Why is Amitabh introduced as a newcomer in the film?

Paa does not have anything that people know about Amitabh. This is a new Amitabh.

I love him so much that I would like to work with him again. I am one of his million fans.

We have a very professional relationship with lots of trust and honesty between us. We understand each other. He is more than just a friend. I adore him. I have always thought of him as my hero.

How are you with Abhishek?

I love Abhishek as an actor. He's the opposite of Amitabh. He's very understated. His sense of humour and his acting is very subtle -- it's more like a European actor while Amitabh is an Indian hero. You cannot compare the two.