Babusivan on his Tamil directorial debut 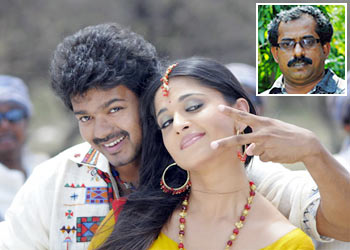 Image: A scene from Vettaikaran
Shobha Warrier in Chennai

Any Vijay film is a much anticipated event as the Tamil actor has a huge fan base.

The excitement is all the more for Vettaikaran (Hunter) releasing on December 18 as it is Vijay's 49th film. Produced by AVM and distributed by Sun Pictures, it is one of the biggest releases of 2009.

But little is known about the man behind the movie. For Vettaikaran is directed by a newcomer Babusivan [inset]. He has also written the script of the film. He tells Shobha Warrier about his experiences and challenges while directing the film.

Were you nervous when you got the offer to direct such a popular actor?

I was never scared. Rather, I was excited to direct an actor like Vijay sir in my debut film.

'I worked as Dharani sir's assistant in Vijay sir's Gilli' 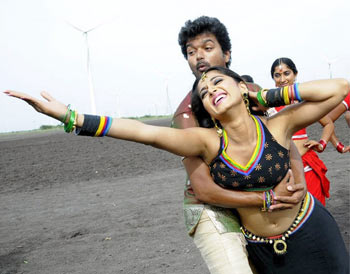 How did you get this chance? Did you approach Vijay with the script?

I worked as Dharani sir's assistant in Vijay sir's Gilli. That is how I know him personally. I was the dialogue writer of his latest film Kuruvi too. As the films I had worked with Vijay sir were action films, I also wanted to make an action film with him. After the shoot of Kuruvi got over, I asked him whether he would listen to my story. He fixed a time for us to meet.

Where did you meet to narrate the story?

I met him at his residence, which is where he listens to stories. It took me two and a half hours to narrate the whole story, which he listened patiently. He liked the story. We then discussed what other things could be added to the script. 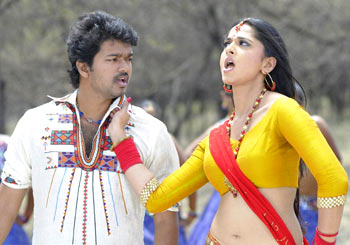 Did you write the script with Vijay in mind?

Is it easy or difficult to write a script with an actor in mind?

It is slightly difficult. You have to have all the ingredients in the script that make a Vijay film click. So, I had to include comedy, action, sentiments -- all in the right doses. When all these ingredients are there in the right proportion, it becomes a commercial film.

When you add all these ingredients, won't the story get diluted?

The base is the story and you add all the ingredients without the basic story getting diluted. That is how commercial films are written.

When you got a chance to direct a Vijay film, why didn't you think of doing something different? Usually all Vijay films follow the same pattern.

We may have the usual commercial ingredients but the base or the foundation or the story is different. I feel the base that I have created is different from the usual Vijay films.

'Vijay and Anushka looked good together' 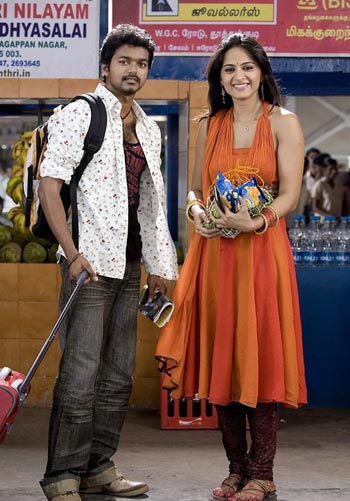 When you narrated the script to Vijay, were you confident that he would like the story?

I was a 100 per cent confident that he would like the story, and he did.

Were you nervous on the first day of shoot as expectations from a Vijay film are very high?

I was a bit nervous initially. But I soon found my groove and things were okay after that. The first day of shoot was with Vijay sir at Vinayakar koil (Ganpati Temple) in Rajamundry. As I had prepared myself well for the scene, everything went smoothly. After that, I became confident.

You have Anushka as the heroine of Vijay. This is a new combination. Why her?

While writing the script itself, I had quite a few heroines in mind. At the same time, I wanted a new combination, a kind of freshness in the film. That is when we thought of Anushka. She also liked the story after we narrated it to her in Hyderabad. Once we started shooting, we found that they really looked good together.

'Vijay is the hunter in the film' 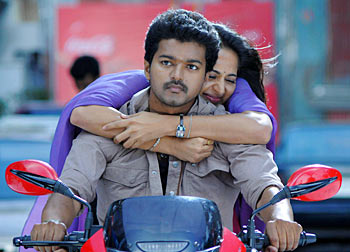 When a common man does something wrong, he will be taken to the police station but when a powerful man does the same, nobody takes him to task. You need a vattaikaran (hunter) to punish them.

Vijay is the hunter in the film. He plays Ravi who comes to the city from a small town. In the city, he meets Susheela (Anushka), a middle class girl who works in an IT firm. She is fondly called Sushi. Sukumari Amma is her grandmother.

There is a villain -- Salim Ghouse -- who is acting in a Tamil film after a long time. Ravi Shankar is another villain in the film.

'I have a feeling that the response will be positive' 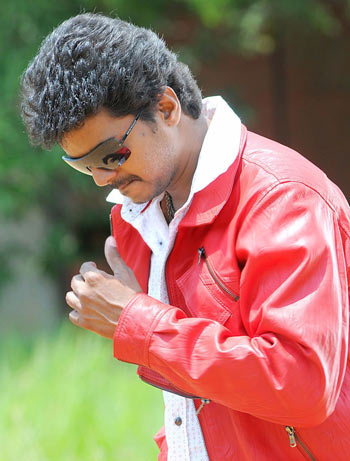 How was it directing an artist like Sukumari who has been in the industry for seven decades?

I cannot tell you how happy I was (to direct Sukumari). I am actually a fan of hers and I have seen almost all her Malayalam films. Her sense of comedy is impeccable.

How do you feel now that there is only one week left for the release of your first film?

Sun Pictures is doing excellent promotion of the film. The producers are happy with the product. Now, I want to know how the audience feel about the film. I have a feeling that the response will be positive.