Shah Rukh Khan's new film My Name Is Khan was unveiled at a grand function at Mumbai's J W Marriott on Thursday.

The superstar was present along with his leading lady in the film, Kajol, director Karan Johar and the CEO of Star TV Uday Kumar.

SRK was quite candid about his plans of promoting his film and did not seem too impressed about Aamir Khan's marketing plans to sell his December release 3 Idiots.

Aamir, for those who still don't know, has been traveling around India in various disguises, challenging people to recognise him before his film releases.

"I am sorry to use the word but it is chichorapan to do something like this -- to create controversy to sell a film. As far of promoting MNIK is concerned, I think every film has its own strategy. If we are asked to go to other states to promote the film, we surely will do it. But if you are asking if I will vanish, I don't know. I am still here," SRK said. 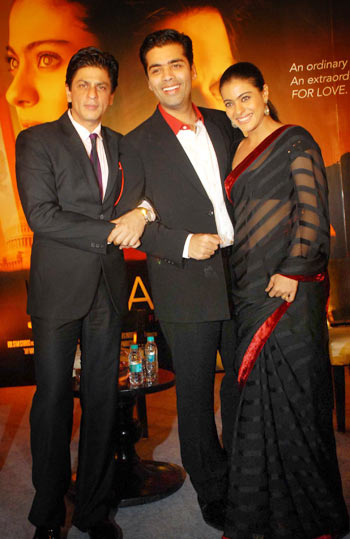 SRK claimed that his detention at the Newark airport in the US last August was not a publicity gimmick to promote MNIK. "As an Indian, a Muslim, an actor and a star I have always been respected. I have never had an issue like this in my life. My detention did not have anything to do with the film. Things like this just happen," he said.

Karan Johar supported SRK by saying, "I think certain things just happen and we get unnecessary credit for it. When Wake Up Sid got into a controversy, people thought it was a strategy.

"Similarly, when Shah Rukh was detained at the Newark airport, people asked me if it was a marketing strategy. If I had so much influence on the Homeland security, I think I wouldn't be where I am now. I would be sitting next to (US President) Obama now."

MNIK sees SRK play an autistic Rizwan Khan, who falls in love with Kajol's Mandira. The film is set against the backdrop of  9/11. 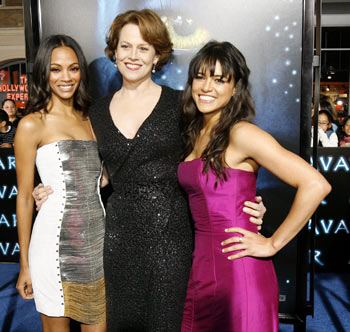 Cast members Zoe Saldana, Sigourney Weaver and Michelle Rodriguez pose at the premiere of Avatar at the Mann's Grauman Chinese theatre in Hollywood, California, on December 16.

The movie opens worldwide on December 18, and it's already getting some great reviews.