How Mumbai's 2005 floods made 3 Idiots possible 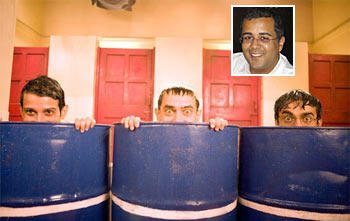 His books sell like hot cakes. From his first novel Five Point Someone to his latest 2 States -- The Story Of My Marriage, banker-turned-writer Chetan Bhagat knows the pulse of his readers.

Two of his novels have already been adapted into films. Though Hello, the film adaptation of One Night @ a Call Centre didn't exactly set our pulse racing, 3 Idiots, which is loosely based on Five Point Someone, looks very promising.

One of the big reasons for this is Aamir Khan's presence in the film, a fact Chetan was unaware of initially. The film directed by Rajkumar Hirani of Munnabhai series fame, also stars R Madhavan, Sharman Joshi, Kareena Kapoor and Boman Irani.

3 Idiots could never had seen the light of day if not for the Mumbai floods. Intrigued? Read on as Chetan talks to Nithya Ramani about his book, 3 Idiots, why Kareena Kapoor is in a different league altogether and his controversial Twitter incident.

Five Point Someone to 3 Idiots. How did this happen?

It has to do with Vidya Balan and the Mumbai floods of 2005. Vidya had read Five Point Someone and loved it. She gave the book to Rajkumar Hirani to read when she was working with him on Lage Raho Munna Bhai.

Because of the floods, the shooting was cancelled for a few days which gave him time to read it. When Raju finished shooting Lage Raho he was in a dilemma of whether to shoot Munnabhai 3 or 3 Idiots. He decided on 3 Idiots, contacted me and that is how 3 Idiots came to.

I think the book was destined to be made into a film by Raju. 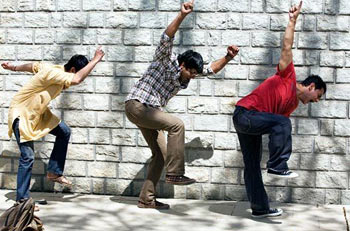 When did you meet him and what was the meeting like?

We met once in 2006 and 20 times after that. It was decided that the film will only be an adaptation of the book as Raju's fans are pan India and it is always better to make a film a little different from the book. The main essence of the book is the plot and the message, which Raju has maintained.

Did you know of Aamir being part of the cast when you met Raju?

No. We only talked about the script witten by Raju and Abhijat Joshi at that point. But when I did come to know about Aamir's presence in the film, I was assured that the film will do well. At first I couldn't believe that Aamir would agree to do the film. I was surprised and since the reach of the film is very important, I am glad it is Aamir. It was my first book and my life in the book, and when I knew about Aamir, I was excited.

To what extent were you involved in this film? You were very involved with Hello...

Not much. I wanted to be moderately involved and that's what I did. I think it is better to take a step back and look at what comes out rather than be too involved and lose sight of the big picture.

The book changed my life and I still want to believe that my first love was Neha though the name is changed to Pia in the film. If I was too involved with the film then I will wonder why they didn't stick to the book. 3 Idiots is ultimately Raju's film and he can do whatever he wants with it.

I did help him with the contacts of my professors in Delhi and Mumbai, though. I introduced Abhijat to them. Raju and I discussed the education system and the basic plot of the film. Raju took it from there.

How different is the book from the film?

I haven't watched the final cut so I don't know yet. I want to enjoy the film with the audience in the theatre. I think I will lose the excitement if I watched it at a special screening. I want to listen to the whistles, claps and comments from the public.

As far as I know, there are distinct differences because of the two time zones Raju has used in the film. That said, the basic message that I wanted to convey is kept intact.

Who would you have cast if you had your way?

I am very pleased with the cast. I think Raju has understood the characters perfectly and cast Aamir, Madhavan, Sharman, Kareena and Boman accordingly.

Sharman is a very close friend. He was a part of Hello too. I think he understands my characters perfectly. Plus, he has great comic timing.

Madhavan has an engineering background so we gelled well [Chetan studied Mechanical Engineering at the Indian Institute Of Technology (IIT) and then studied at Indian Institute of Management (IIM) Ahmedabad]. I met him much before the film got underway. We talked about colleges and the education system. It is nice to have him in the film. People compare me to Madhavan but I wished they compared me to Aamir [laughs].

Kareena, I think, has great screen presence. She seems very effortless and spontaneous. Though Neha was my first love, I can't compare Kareena to Neha. She is of a different league. 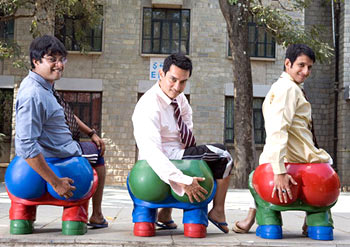 Did you go on the sets of the film?

I went to IIM Bangalore just for a day. I met Aamir there and we bonded big time. I had heard a lot about him being a perfectionist, which I got to see for myself on that day.

There is a scene where Aamir walks past a bin, picks up a paper and throws it into the bin. In the book I'd written 'he threw the paper in the bin'. Aamir, however, wanted to get it right so he shot the scene at least 10 times

Has Aamir read the book?

Did you have any say in the title of the film?

I don't think I had a say in it. The title suits the film perfectly. It is about three idiots who are geniuses but whom people don't understand or recognise.

'3 Mistakes of My Life is in the scripting stage' 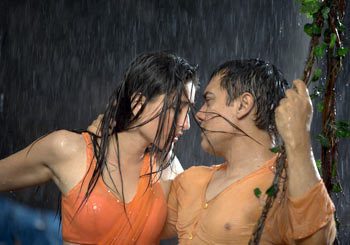 Your tweets on piracy caused quite a stir...

[Laughs out loud] I was in Hong Kong for a break. I was too busy and stressed with 2 States releasing and all that so I decided to take a break. I was just being a responsible citizen telling people to stop piracy but it got out of hand.

What next? Are you planning to make films of your other books as well?

I have been getting a lot of offers for 2 States because it has so much filmi material. 3 Mistakes of My Life is in the scripting stage with Abhishek Kapoor (who directed Rock On!!). This film will be more similar to the book. Next is a screenplay, then a break from writing.