Portrait of a Director: Rajkumar Hirani 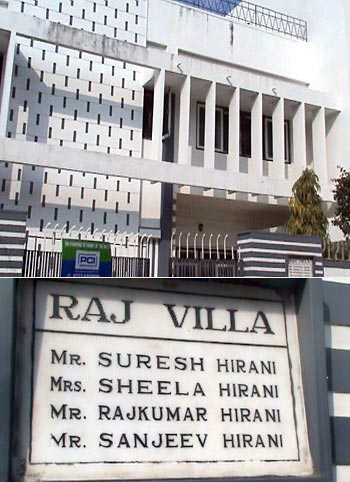 Image: Rajkumar Hirani's home in Nagpur
Photographs: N V Reuben Patcy N in Nagpur
Barring a Shah Rukh Khan, an Akshay Kumar or a Preity Zinta, it is near impossible for most Indians to break into Bollywood's exclusive club of star children. Hearteningly, it is still possible for Indians born in middle class homes to become star technicians like 3 Idiots director Rajkumar Hirani.

Suresh Hirani, Rajkumar Hirani's father, is a refugee from that great sub-continental tragedy called Partition. When Suresh arrived in India with his mother, two brothers and five sisters, he was just 14.

His father and eldest brother had passed away, so it was up to Suresh to support his large family. He took up work in a bangle factory in Firozabad, Uttar Pradesh, and later moved to Nagpur where he set up a typing institute with just two typewriters.

His business flourished and soon he had about 1,000 students, with 16 batches a day.

The advent of computers eventually forced the institute to shut down in 2000.

Suresh did not ask his son to join his business even though Raju proved to be a good salesman, once selling 40 typewriters in 40 days when his parents were on vacation.

When he learnt that Raju was interested in cinema -- he wanted to become an actor, not a director, mind you -- Suresh got his son's photographs shot and packed him off to an acting school in Mumbai. But Raju could not blend in and returned to Nagpur after three days.

His supportive father then asked Raju to apply to the Film and Television Institute of India in Pune, where actors from Jaya Bhaduri and Shatrughan Sinha to Om Puri and Naseeruddin Shah, and directors from Adoor Gopalakrishnan to Subhash Ghai learnt their craft.

The acting course had shut down by then and chances of admission to the directorial course looked slim as there were way too many applicants. So Raju opted for the editing course. He earned a scholarship, thereby reducing the load on his father's financially burdened shoulders. His parents proudly point out that Raju never asked then for money when he was at the FTII.

"Raju was always an introvert, just like me," says his mother Sheela Hirani, a retired schoolteacher. "He never harassed me or asked me for money. And I never gave any pocket money till my children grew up." 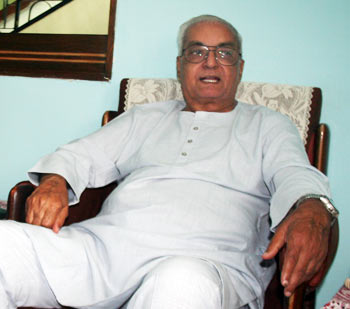 After graduating from the FTII in 1987, Raju moved to Mumbai to commence the inevitable struggle. His father had promised him an apartment in the maximum city, but Suresh could not keep his promise thanks to his dying business.

So Raju lived with friends like Sriram Raghavan, now the director of films like Ek Hasina Thi and Johnny Gaddar.

A few freelancing editing jobs later, Raju joined Vidhu Vinod Chopra's team on Mission Kashmir and never looked back. It was 2000, the year his father's typewriting institute shut down.

"I never thought my son's very first film would be a superhit," says Suresh of Munnabhai MBBS, the movie that made Raju Hirani an A-Lister in Bollywood.

When Raju moved to Mumbai, his parents insisted that he marry. Raju stalled for time until his younger brother Sanjeev got engaged. Both brothers got married the same day, in December 1994. Raju's wife Manjeet is a pilot with Indian Airlines.

The director is a dependable son, sending his parents money every month, taking care of large expenses like his sister's wedding or sending his parents abroad to meet Sanjeev. He has bought his parents a home in Mumbai, but Suresh and Sheela Hirani prefer the familiar pace of Nagpur to the frenetic momentum of Mumbai that their son has grown accustomed to.

Raju always narrates his scripts to his mum 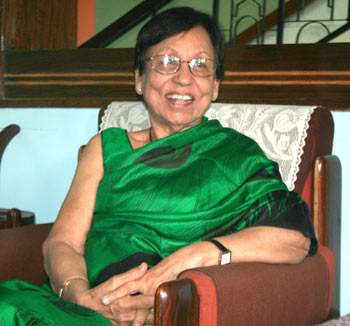 Raju always narrates his scripts to his mother Sheela, asking her repeatedly whether she likes it or not. Earlier, Sheela admits shyly she would not understand his scripts. Now, she's proud to say that she does.

Suresh Hirani had not liked the title Munnabhai MBBS when he first heard it.

Sheela had her first brush with Bollywood at the premiere of Munnabhai MBBS. Her neighbours in the theatre -- Sunil Dutt and Priya Dutt -- added to her nervousness, and she could not concentrate on the film at all.

As soon as the screening ended, Raju asked her how she liked it. Sheela managed a positive reply a few seconds later. But the pause made Raju think that his mother had not liked it.

Today, Sheela says she has seen the film many times and absolutely loves it. But her son still keeps teasing her that she never liked his first film.

Sheela got over her first shock of stardom, and even danced with Sanjay Dutt at a Munnabhai MBBS party. She is very impressed by the younger Dutt who had touched her feet on the film's sets.

Raju was quite the prankster 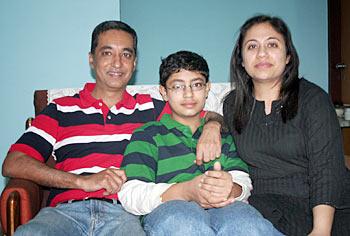 "My brother is more like a pal to me," says Sanjeev Hirani who works with his wife Neetu in Virginia, USA, as computer consultants.

"Sometimes he would bully me," grins Sanjeev. "If he wanted to go for a film but did not want me to tag along, he would trick me by saying bye to his friends and asking them to leave the house. Then he would go out the back door and meet them. I was not allowed to go out with him and his friends."

Raju was quite the prankster. One day, the brothers went to a friend's home, wearing scary masks, and terrified the child. Sometimes, they would wear the masks to a graveyard and scare a newcomer in their social group.

Suresh remembers a time when he saw Raju murmuring with his friends in a corner. When he asked them what they were talking about, they said they were scared of ghosts. Suresh explained that ghosts didn't exist.

To prove his point, he took them for a long drive that night. He drove along a long, 'scary' road and asked the children to try and spot any ghosts. Raju never felt afraid again.

Raju was always interested in acting and was quite active in dramatics in school and college. He would keep his costumes safely out of sight. Sanjeev, for one, was never allowed to touch them.

"There was a time in school when Raju had to play Noorjehan in a play," recalls Sanjeev. "Raju just told me that he was acting in a school play. So I bragged about it to all my friends, not knowing that he was playing a woman's role. When he came on stage and I saw him in a woman's clothes, I was so embarrassed!" 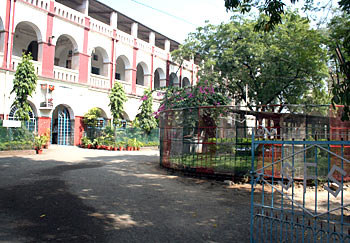 "I never thought he would make it so big," says Sanjeev. "When he went to FTII, people would ask me, 'Tera bhai hero ban gaya kya (Has your brother gone to become a hero)?' They didn't realise that he was taking an editing course there."

"When Munnabhai MBBS released, I was in the US. Raju's number was busy so I called my sister Anju and asked her what the response was. She said the theatre was empty. That made me sad. But in the evening, she called and said that the theatres were full, and everybody loved it. I took all my friends to the theatre and showed them the film," adds Sanjeev.

Raju's films, his brother points out, are mostly inspired from real life. Sunil Dutt's first scene in Munnabhai MBBS where a thief tries to rob him at the railway station is a scene taken from Raju's life. In the film, Duttsaab rescues the thief from being beaten up and brings him to his son's hospital to get treated.

In real life, Raju's dad met a man trying to dupe people by getting to place ads in a magazine that would never get printed. After a few months, Suresh Hirani saw the man drunk. He asked him to confess, and the man did. People started beating the man up, but Suresh brought him home, fed him and gave him money to return.

"Raju used to visit a medical college often because he had friends there," says Sanjeev. "Munnabhai MBBS is inspired from that, especially the ragging scene."

"Raju is always short of sleep," says his sister-in-law Neetu. "He can doze off while talking to you!"

Her son Karan loves bragging about his famous uncle. He once told his friends that Munnabhai Chale Amerika, the third part in the trilogy, would be shot in the US, and that he has a role in it.

Young Karan got his moment of glory when Raju called him on stage at an awards event and shared his trophy with him. Karan still has the award in his room. Karan hopes his Rajuchachu will make a film with his favourite actor Hrithik Roshan.

'When I saw Munnabhai MBBS, I was in tears' 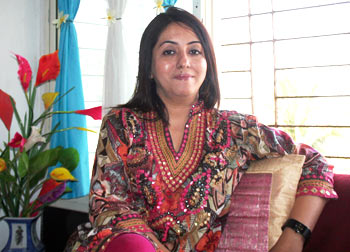 Anju Kishanchandani, Raju's sister and a journalist, was still in college when Raju left Nagpur. She would spend all her vacations with him in Mumbai and he would take her for bike rides around the city.

"Raju is a fun brother, very caring and protective," she says. When he learnt that a boy in her college was harassing her, he got the boy beaten up by the college bullies.

Anju would get bullied by her brother as well since she was the youngest and the only sister. "One Rakhi, Raju gifted me a huge box. I kept opening it and discovered smaller boxes inside. Finally, there was a two rupee coin, hammered in badly. I felt so bad that I started crying. Then he gave me my real gift," she recalls.

"Fame has not changed him," she adds. "But he has become busier now because he cannot say no to anybody."

"I never thought he would become a director. When I saw Munnabhai MBBS, I was in tears," Anju smiles.

When her brother appeared on television or be written about, Anju would call and tell him. After some time, when his media appearances increased, she stopped calling him. One day, Raju told his sister, 'I think I have become famous now. Your calls have stopped.'

'I always thought he would become an actor' 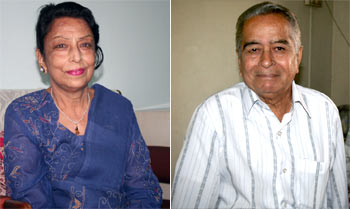 She helped Sheela Hirani get her children admission in the school. "He's always been interested in acting. We did a play called Chatta Chor in which he was the hero and he did it really well," Kapoor remembers.

"I never thought he would make such good movies. Even today, whenever he comes to Nagpur, he visits me and touches my feet."

Kishore Kulkarni, who often directed Raju in his college plays, remembers him warmly. "I could never say no to him; he would talk so nicely. Since I was working in the Railways, I could only make time in the evening. But Raju coaxed me to come in the mornings. He would tell everyone in the play that we had to do it properly because I was coming in the morning only for them."

Kulkarni met Raju last year at the Pune film festival. "Raju has not changed a bit," he says. "He is so down-to-earth. The hall was crowded but he came and spoke to me." "I was impressed after watching Munnabhai MBBS," says Kulkarni. "His devotion towards his work can be seen in his creations. I always thought he would become an actor so I was shocked when I learnt he became a director."