Aamir: I want everyone to watch my film

Aamir Khan employs a different marketing strategy for each of his films, and they never fail to work.

To promote this Friday's release 3 Idiots, Aamir 'disappeared' for a couple of days and traveled all over India in various disguises.

Three days before the film's release, Aamir made his appearance again, and spoke at length about his memorable experiences and India tour. Patcy N took notes:

Whose idea was this 'disappearing act'?

Mine. But it was implemented by many people. They had a code name for me called Phantom and the operation was called Operation Spiderman. We started preparing for it four months in advance.

How was your journey?

It was very exciting. I had an amazing experience in every state -- from Uttar Pradesh, Gujarat, Rajasthan, Punjab, Madhya Pradesh and Tamil Nadu. I met many people and learnt about their problems, aspirations and day-to-day issues.

This game had different layers. Firstly, it was a marketing strategy for 3 Idiots, as it is connected to the story. In the film, my character Rancho disappears and his friends have to search for him. So we thought we should market the film in such a way that I go missing and my audience goes searching for me. Wherever I went, I made friends and gifted them gold rings. I have invited them to the premiere of 3 Idiots.

Secondly, it was only a marketing strategy. I wanted to connect with common people. Usually, when I visit the different parts of India, people know me and treat me like an actor. But here, nobody recognised me. People treated me like a common man and that was a new experience for me.

The third layer of this trip was that I wanted to throw light on certain issues in the country. I went to Chanderi in Madhya Pradesh, a place where weavers live. Two years ago, I heard it was a dying profession and that they were running into losses. I wanted to highlight their problems and request people to wear hand-woven clothes as much as possible.

Likewise, I wanted to highlight the problem of education. So I went to Gujarat where the education system is good. There is free education in small schools up to Standard Seven.

How much of this will help the film?

I don't know that. But I liked the idea and its various layers.

'My guide had never heard of SRK and Aamir Khan' 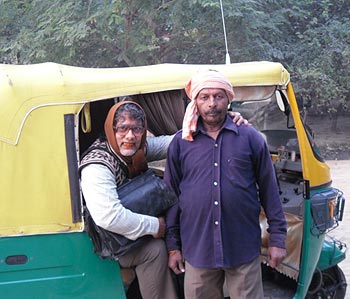 What were the different reactions you got?

I went to Varanasi, Uttar Pradesh, because my mother was born there. A local called Lallan Miyan took me to Teliyanala, where my mother lived for 10 years.

My team had short-listed some places and people whom I would meet. Like, I wanted to see a wedding and the wedding season was getting over. Punjab was the only place still having weddings -- there were six of them. My team told them that a foreigner would attend to make documentary film. People were shocked when they realised it was me.

When I went to Mahabalipuram in Tamil Nadu, my team selected a guide called Laxman for me.

I asked my guide whether he had seen any Hindi film he said he had seen Shalimar, starring Dharmendra. He did not know any other actor. I asked him if he had heard of Shah Rukh Khan and Aamir Khan and he said no. So even if I had gone without my disguise, this man would have not recognised me.

'My mother could not believe that I had reached Teliyanala' 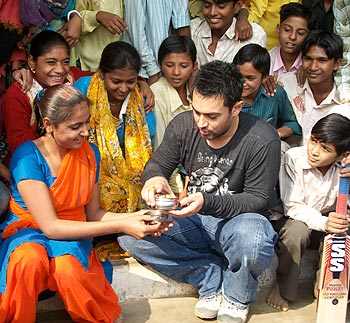 Tell us about your trip to your mother's hometown in Varanasi.

Some of my relatives had gone to this place six years ago but could not find it. That's why I wanted to search for it.

My mother could not believe that I had reached Teliyanala. Unfortunately, I could not enter the house, as the lady of the house was alone and her Sardar husband was at work. So I thought it was inappropriate.

Did you ever get caught?

The only place where I was recognised was in Tamil Nadu, where there were a lot of tourists. My security told me that a girl had recognised me but her family refused to believe her. In order to clear the girl's doubts, they decided to approach me. But I was already in my act with Laxman so my security asked them not to disclose my identity. 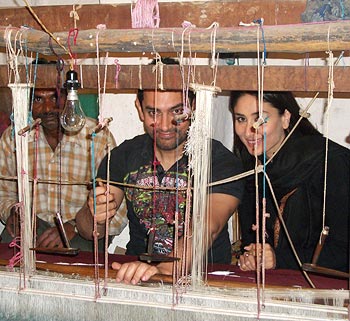 Both Kareena and you fell sick after the Madhya Pradesh trip.

Kareena's food poisoning did not happen because of this trip, it happened after she came to Mumbai. I ate good food on this trip, at people's house and roadside dhabas. In Gujarat, I ate from a school girl's tiffin, cooked by her grandmother. That was excellent.

I fell sick because I exerted myself too much on the trip.

Have the ticket prices increased for 3 Idiots?

No, I don't think so. The weekend ticket prices may be, but that is decided by multiplexes, not by producers or distributors.

Personally, I would like the ticket prices to be as low as possible. I want everyone to watch my film. If you have the money, you can watch it in a big multiplex. But if a person can afford only Rs 10, he should get a chance to see my film too because he's my fan too. I have asked video parlours to get legalised many times, so that the audience can pay less to watch films on video legally.

'Every actor gets equal importance in 3 Idiots' 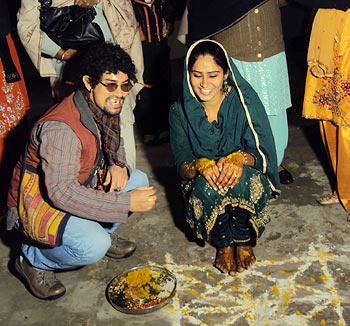 It seems that only you are promoting the film. Your co-stars R Madhavan and Sharman Joshi aren't getting equal importance.

You saw how all the 11 actors in Lagaan got equal importance, all five actors in Rang De Basanti got equal spotlight, Taare Zameen Par's Darsheel Safary was in the forefront and I was out of focus.

Every actor gets equal importance in 3 Idiots. Rancho goes missing, so that's why I went missing. But meanwhile, the others were giving interviews and chats. The posters have all of us.