'People were whistling while watching Raam' 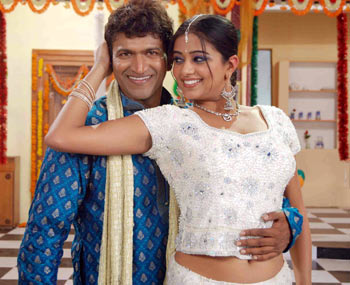 Image: A scene from Raam
R G Vijayasarathy in Bangalore

Six years after working in Tamil, Telugu and Malayalam cinema, Priyamani has now made her Kannada debut with Raam, a remake of the Telugu hit Ready. The actress has been paired with Puneet Raj Kumar.

The Bengaluru girl is currently in Mysore shooting for her second Kannada film, Eno Onthara, where she teams up with Golden Star Ganesh. This is a remake of A J Surya's Tamil film Kushi, featuring Vijay and Jyothika.

Priyamani talks to R G Vijayasarathy about the response to Raam, and much more.

You watched your first Kannada film Raam in a theatre in Mysore the day it released. Did anyone notice you in the audience?

I wanted to watch my first Kannada film with the first day audience. I was shooting in Mysore the day Raam released but everything fell into place and tickets were arranged. I watched the film with my mother and some of my assistants.

What a great experience it was! I saw people clapping, whistling and even dancing in front of the screen during the Hosa Gaana Bajaana song. The audience enjoyed the comedy, song picturisations and fights. Watching the film with the audience was thrilling. I think I had a great debut in the Kannada film industry. Thank God for that because I'd always wanted to enter the Kannada film industry with a bang. 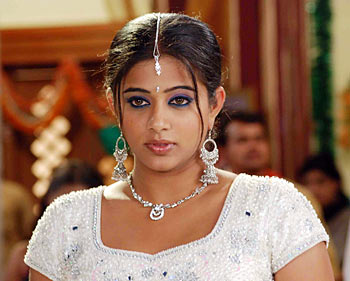 You were brought up in Bengaluru and you studied in the Arabindo School in Banashankari. You started your modelling career there as well. Why didn't you debut in Kannada films earlier?

I got offers to work with Darshan in Saradaara and Ganesh in Sangama. Also, with Puneet and Shivaraj Kumar.

Aditya Babu contacted me in Hyderabad and offered me Raam, which happened.

What feedback are you getting about Raam?

I hear that the film has got a huge response in Karnataka, and that everyone in the audience have been enjoying the film.

Earlier, I told the media that Raam is a fun film, which can be watched with the entire family. The film has proved that.

I got positive messages from my friends as well. 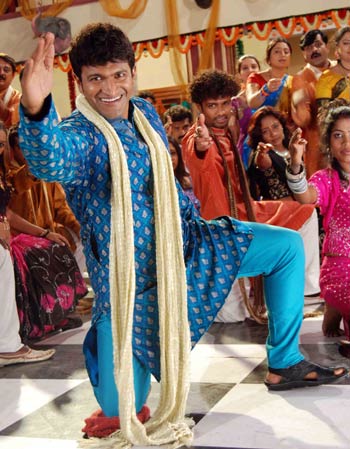 Tell us about your role in Raam.

I play Pooja, a simple girl who is torn between two warring families. But both families love her.

I think Raam is a perfect launch for me in Kannada. It is a romantic comedy with a lot of entertainment and drama. It is a film for all ages.

Raam is a non-stop comedy with a lot of confusion and misunderstanding. The way the songs have been picturised is another highlight of the film.

The audience will get to see a new Puneet and a new Priyamani because we have done something which we've never done before.

How was it working with Puneet in this film?

I had met Puneet sir earlier -- I had gone to his office five years ago when they were searching for a heroine for Akash. I had met his older brother Raghanna too. I could not work in Akash but am lucky enough to work with Puneet sir in Raam.

On the first day of the shoot, I wondered whether I should remind him about our first visit but Puneet himself told me about it. He had such a fantastic memory. I was really impressed. Puneet sir is a down-to-earth person and does not have any airs. He behaves well with all the artistes.

And the film is full of them. There were many veteran artistes too. I enjoyed working with all of them.

'I am passionate about dancing' 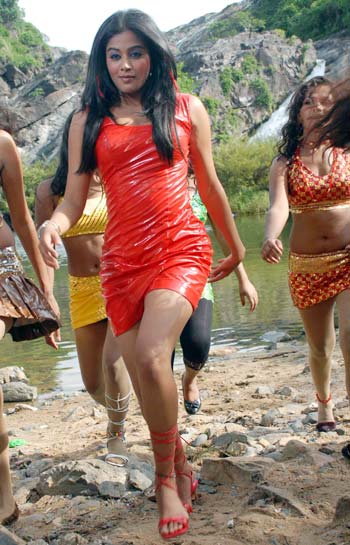 I like the lyrics and tune of Hosa Gaana Bajaana. I am passionate about dancing. Puneet is a good dancer too. Both of us gelled very well for this song. Here, we're wearing funky outfits. We had a lot of fun shooting for the songs.

You have already signed your second Kannada film. How did you feel when this offer came to you?

I had got an offer to work with Ganesh in Sangama earlier but I did not have the dates then. The producer Chandrashekhar came to Hyderabad to finalise the dates, as I had to complete three Telugu films. We met up in Bangalore first, then in Hyderabad, where everything was finalised.

It is a remake of Telugu and Tamil film Khushi. The film offers both Ganesh and me very good roles.

'Working in Raavan was a dream come true for me' 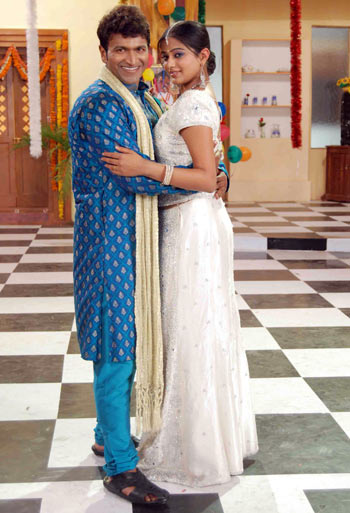 Though you have got a National Award for the Tamil film Paruthiveran, you have been busier in the Telugu film industry. Also, you have been doing more commercial potboilers than stories with good content.

No, I don't agree with you. In the Telugu film industry, a meaningful film like Pellaina Koththalo gave me a good break. This film had such a wonderful story that the female audience really backed the film. I had a fantastic role in the film.

Then I did Yamadonga with NTR, which became a big hit. I have acted in many Telugu films including Pravarkyudu, which has done well and has been critically appreciated too. I am now doing two female-oriented films, Shambo Shiva Shambo -- a remake of Tamil hit Nadodigal -- and a suspense thriller called Saadhyam. Saadhyam is a heroine-centric film.

Working in Raavan was a dream come true for me. I never thought I would be part of it until costume designer Sabyasachi Mukherjee told me that he would be working on two types of costumes for me. It was a fabulous experience working with Mani sir and Abhishekhji (Bachchan). I have shot for 25 days in Madhya Pradesh.