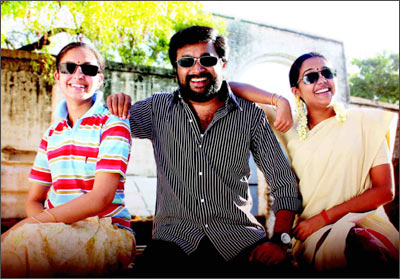 Image: Sasikumar (centre) in a scene from Nadodigal

Sasikumar has become a man with the Midas touch. The film he directed -- Subramaniapuram -- has become a cult film in Tamil. The film he produced -- Pasanga -- was not only critically acclaimed but also did very well at the box office. Now, Nadodigal, in which he is the main protagonist, has been released to excellent response.

Basking in the success of Nadodigal, a happy Sasikumar spoke to Shobha Warrier about the various hats he wears these days and his second directorial venture.

Your film Nadodigal as the hero had an excellent opening throughout Tamil Nadu, more than many big heroes have had in recent times. Were you surprised by this response?

After the way the people of Tamil Nadu accepted Subramaniapuram, I always felt there would be a good opening for Nadodigal. But yes, what surprised me was the kind of opening it got all over Tamil Nadu, be it a city or a town or a village. It was overwhelming. Even in Bangalore, the film is doing very well. It was beyond our expectations.

'I'm not a new face anymore' 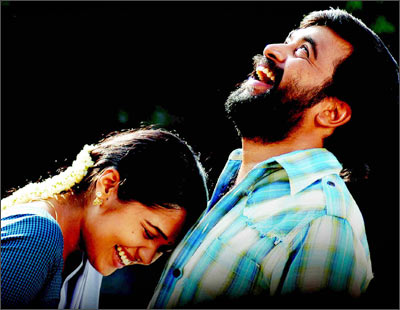 After this, will Sasikumar the director take a backseat?

Never. I am a director first and last. The producer and the actor in me came into being only after the director. The most important thing in my life is being a writer and a director. I came into the industry to be a director and I will always be one. The other things are incidental.

Will your next venture be as a director?

I am starting a movie with new faces in two months' time. That will be my second directorial venture. In that film, there is no place for Sasikumar the actor.

Because I'm not a new face anymore! But the main thing is, I have no place in the story as an actor.

Will it be story set in a rural background like Subramaniapuram?

No. It will be a city-centric love story with action.

'The public accepted me as an actor' 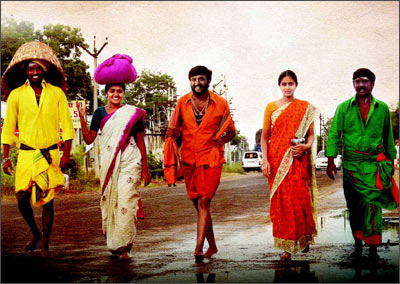 When I spoke to you after Subramaniapuram was released, you said you acted in the film because you didn't get any other actor. What was the reason why you accepted Samuthirakani's offer to make you the main hero in Nadodigal?

The beginning was when Samuthirakani was acting in Subramaniapuram. As we were doing the post production work of the film, he was making rounds of various producers but didn't get anyone to produce his story. I read his script and told him t that as I had a production house, I would produce it. I liked the story a lot.

He said, you are already suffering with Subramaniapuram and I don't want to burden you again. He and my cameraman Kathir felt that we should not be producing our own films all the time. It was then that both Kathir and Samuthirakani insisted that I act in the main role.

Did you agree immediately?

'There's nothing heroic about my character in Nadodigal' 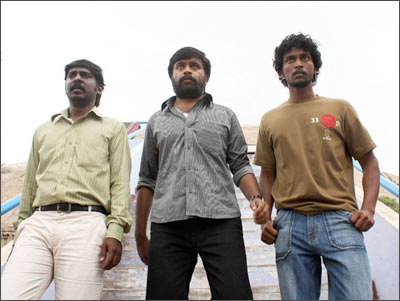 How did you find out that people liked your acting? What kind of feedback did you get?

I watched the film along with the audience several times. Their reaction gave me the impression that they accepted me as an actor too. I saw them enjoying the scenes where I was there, and the dialogues I uttered. I found that they were not averse to me! [laughs]

What did you like about your character in Nadodigal?

I liked the character Karuna a lot. He is totally different from what I had portrayed in Subramaniapuram where I had not many speaking lines and I was brooding and serious all the time. In Nadodigal, I am a happy go lucky man. There is nothing heroic about him as he is as real as anybody else you see in real life. That is why I liked the character.

'I didn't have to build up my body' 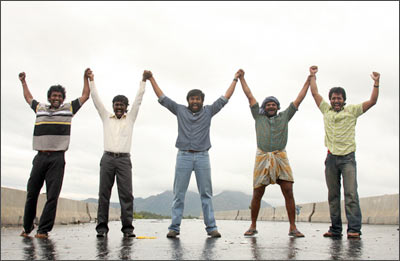 Why did you decide not to have any physical change in Nadodigal? You look the same with the same hairstyle and beard.

In Subramaniapuram, I had the 80s style while in Nadodigal, I look what I am in real life. Samuthirakani wanted me to look the way I am as Karuna is a very ordinary being. I didn't have to build up my body so that I look muscular enough to hit ten men! I looked like any other man you see in real life.

Many people feel that Nadodigal has the Subramaniapuram influence in style, execution etc. Do you agree with this?

All of us are heavily influenced by the way Ameer, Bala etc made films. Similarly, if Subramaniapuram is a good film, is there anything wrong in getting influenced by that? I feel it is good to be influenced by good films and good directors. I don't look at it as a bad thing at all. Bala, Ameer, myself, Samuthirakarani are all from the same school of filmmaking.

I also feel maybe because I am a common factor in Subramaniapuram and Naadodigal, you feel both look the same. But my argument is that there is nothing wrong in getting influenced by a good film. But then there is a lot of difference in the characters you see in both the films. Even after so many months, people are carrying the memories of Subramaniapuram with them, which is very heartening. Many people tell me that if somebody mentions the word friends, they suddenly think of Subramaniapuram.

'I'm not doing another Subramaniapuram' 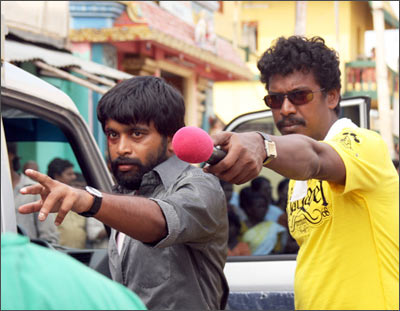 Now in Tamil, Subramaniapuram has become a cult film. It is a kind of benchmark film in Tamil. How do you feel about it as its creator?

I am happy and elated. I had to really struggle to make the film. But the success of the film and further expectations make one a bit scared. It is but natural. I don't know whether I will be able to give them a film like Subramaniapuram again. I don't know whether I can achieve what I have achieved in my first film. The problem arises when you give the best in your first film...

I know it will be impossible for me to touch the level of Subramanipaurm. I can only try. I know the expectations will put a lot of pressure on me. So, I have decided to forget my first film and start my second as if it is my first. What else can I do?