'Short Kut is a fun film' 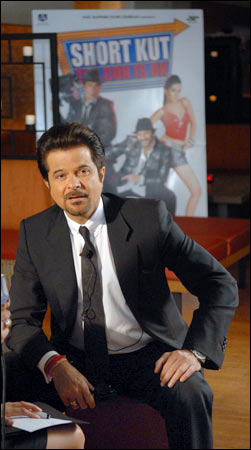 Anil Kapoor readily admits that when he saw the completed versions of Gandhi, My Father and Short Kut, the Con Is On. He wished he had been in the two movies, doing the roles that went to Akshaye Khanna.

"He is an amazing actor," says Kapoor with a chuckle. "He gets under the skin of his characters, seemingly without much effort. I hope to work with him for a long, long time."

In Short Kut, he admired the work of Arshad Warsi too. "I really envied them," he says. But there was a "bigger satisfaction for him" as a producer, he adds, "especially when you are responsible for everything."

The new movie Short Kut, directed by Niraj Vora (Phir Hera Pheri) and based on a story and screenplay by Anees Bazmee (who also directed the smash hits Singh Is Kinng, No Entry and Welcome) is about three lives crossing each other, often under funny circumstances.

Arshad Warsi plays Raju, a hammy actor who becomes a star, partly thanks to stealing a script. Akshaye is the would-be movie director Shekar whose script has been stolen. Meanwhile, an actress (Amrita Rao) is drawn to Shekar but she is also interacting socially with her co-star, Raju.

Fate brings Shekar and Raju face to face when Shekar is ready to direct his first film -- and you have guessed it, Raju is the star of the film.

'I saw my father struggle a lot' 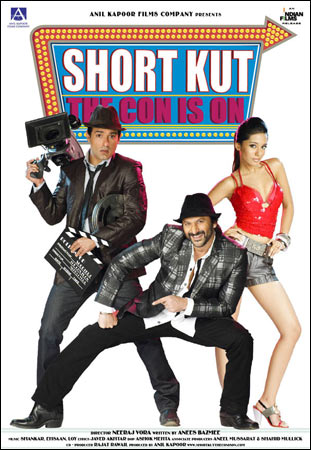 Kapoor was in New York to promote Short Kut, which follows a path very different from Gandhi, My Father, his first movie production.

"There was a break in the shooting of 24," he said, referring to the popular Hollywood TV series in which he has a recurring role of an intriguing Muslim character. "So I talked with Studio 18 (distributors of the film in the UK and North America) about doing promotion for Short Kut, and I have been doing press for a couple of days in Los Angeles and now here in New York."

Kapoor is only too glad that the two films he has produced are very different from each other. 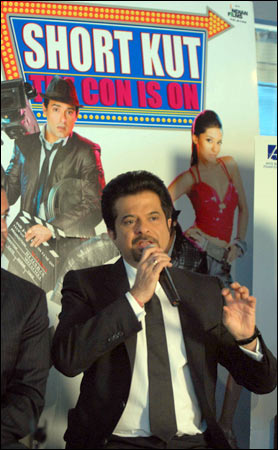 "Gandhi, My Father was a kind of docu-drama," he says. "It required a lot of research and attention to the period in which the action takes place. The target was international audience and a niche audience in India."

On the other hand, Short Kut is an out and out "mainstream, commercial film but it has a story and its characters are very real, very good, very lovable, especially the characters of Akshaye and Arshad. I feel people will identify with these characters."

Over the years, he continues, he has come to realise, "people go to see people in films." Short Kut also has a moral, he asserts: Short cuts do not make you a better person and often land you in a mess.

'I cannot say no to Subhash Ghai' 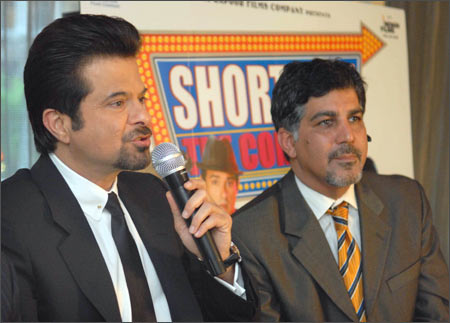 Then Subhash Ghai called to say that he wanted Kapoor in his film Black & White.

"Now, Subhashji and I have a very long association (including Meri Jung, a 1985 hit and Taal). I cannot say no to him. Even then I told him that I was going to start Short Kut. He said, it is your own film and you can postpone it. I did not like the idea of postponing the film, so I opted out of my own film."

Kapoor said the reason he decided to cast Arshad was because he loved his performance in Lage Raho Munnabhai.

Kapoor has been acting for nearly three decades. He turned a producer a few years ago.

"Film production is in my blood, " says Kapoor, whose father Surinder Kapoor had made films for more than five decades, and brother Boney Kapoor for over two decades. "But I did not really want to be a producer."

"I am basically an actor," he continued. He had also seen his father and brother "suffering because of un-professionalism of the entire film industry, especially the Hindi film industry."

In South and in Bengal, things were better, he said. Kapoor has acted in many films made in the South, especially in the early years of his career when such directors as Bapu cast him in films like Hum Panch (1980). He also acted in a few Tamil and Telugu films including Vamsa Vriksham (also in 1980).

"When I was growing as an actor, there was not much professionalism in the Indian film industry, though in the South and in Bengal there was quite a bit of professionalism," he says. "I felt producing a film was a thankless job. I saw my father struggle a lot; I saw him face one big problem after another. He is a person of integrity and I used to feel terrible for the problems he faced."

But about a decade ago things began changing, he added. "There were more like minded people I could relate to. More corporate money was coming into films. There were better scripts and better directors. So when I came across the script of Gandhi, My Father, I decided to turn producer."

'I would love to work again with Danny Boyle ' 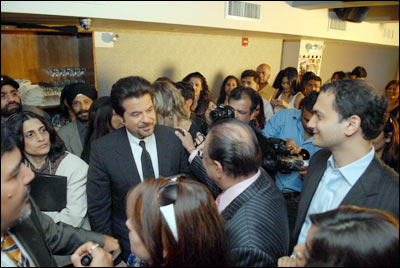 What draws him to a movie project? "Well written, well-rounded characters," says Kapoor who is set to produce two films in the next 12 months, one a big hearted comedy No Problem to be directed by Bazmee, and another film, Ayesha, based on a Jane Austen novel Emma. The latter film would feature his daughter Sonam and Abhay Deol.

"One of the reasons I feel Short Kut will do well even though there are quite a few big films in theatres or are getting ready for release, is because the characters played by Akshaye and Arshad are quite unlike the characters we have seen in our films. At the same time, they are also very believable characters. They are fun but they also have complexities."

We talk about Slumdog Millionaire which is still running in many countries and has grossed $362 million.

He says he has moved away from the movie. "I like to move away from the crowing glory," he explains, adding that Slumdog is one of the most profound experiences he has ever had. "Now I am busy with 24, and my own production. But surely I would love to work again with Danny Boyle (director of Slumdog) and the writer Simon Beaufoy."