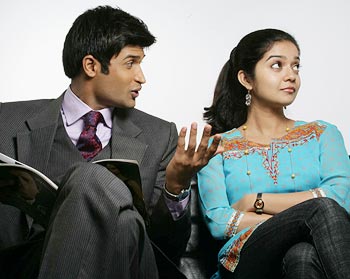 Kamal Kamaraju, first seen in Sekhar Kammula's Godavari (where he played the second lead opposite Neetu Chandra), later played the lead in Avakkai Biryani (as an auto driver) before Kalavaramaye Madilo. In between he did Confessions of a Filmmaker (which gave an insight into the goings on in the Telugu film industry) which was not released in theatres but found a place on the Internet.

You signed Kalavaramaye Madilo despite the fact that it was a heroine-centric film. What made you do so?

The script impressed me. It was so fantastic that I had no choice but to accept it. We used to have discussions in the drawing room on how films should be made, how heroes in various languages should be. May be this was my opportunity to do what I talked of. The film was so good and directed well.

'I chose the clothes myself' 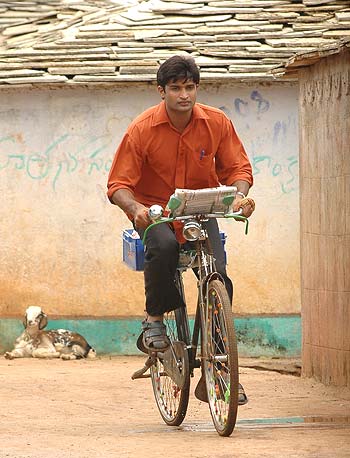 Image: A scene from Avakkai Biryani

In Kalavaramaye Madilo you play a boy from London whereas in Avakkai Biryani you played an auto driver. How did you adapt to your role as an NRI?

While discussing my character in Kalavaramaye Madilo, we decided that he should not speak with an accent.

In Avakkai Biryani my character shouts as he is a bit rustic. In Kalavaramaye Madilo he respects other's value and space, by keping his voice low. I also bore in mind the finer nuances and body language. I was also guided by Satish garu. I chose the clothes myself. I had gone to Cornerstone myself and discussed the colour scheme and selected the clothes.

Gavin, my trainer, helped with me with my look in Kalavaramaye Madilo. In Avakkai Biryani my look was more fragile.

We had a special show after he narrated the script. I was very impressed with the film. Satish is one of the directors after Sekhar (Kammula) who does what he believes in, which of course, translated into an award-a wonderful recognition.

'I was impressed with Satish' 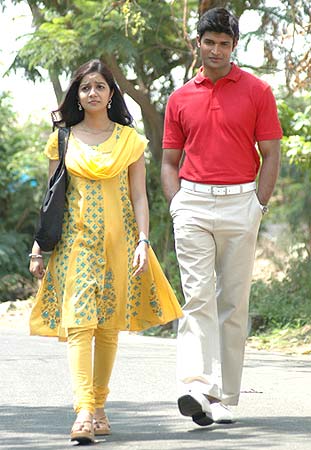 How was it working with Satish?

I was impressed with him. He has a kid of almost my age. He is rooted and passionate to tell a story he believes in with no commercialisation. It's amazing to have that quality. In a way Kalavaramaye Madilo stands for that -- believe in your dreams and strive in your path and don't be misguided. I learnt a lot from him; he is such a mature and balanced person. He respects what actors and technicians want to impart to the film and gives them the freedom to express.

How was sharing screen space with Swati?

It was like how you feel happy when you share your tiffin box with a co-bench mate. There was camaraderie between us. We both are professional. She is an amazingly spontaneous actor and her exuberance shows off on screen.

'I want to do roles that make me lose my sleep' 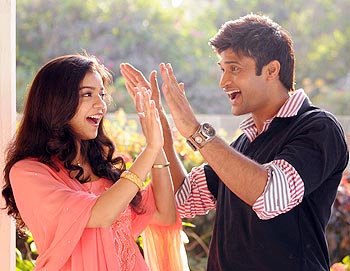 Were you disappointed with the performance of Avakkai Biryani though it was a good and honest effort?

I was very disappointed. In a way, it was a learning process. As an actor, I got good reviews but was depressed as the film didn't do well. I also felt responsible for what happened. To make films popular is an onus on us.

You share a good rapport with Anish Kuruvilla (who directed Confessions of a Filmmaker and Avakkai Biryani). Would you be doing more films with him?

Definitely, if he has a role for me, I would do it. I am always ready. I have great respect for him. He stood by me when many thought I wouldn't perform.

What are the kinds of roles you are looking for?

Roles that will give me the challenge as an actor and make me lose my sleep and think about how to do it. I want to do varied roles from a fisherman to a person who climbs Everest or a soldier in the Nizam's army. 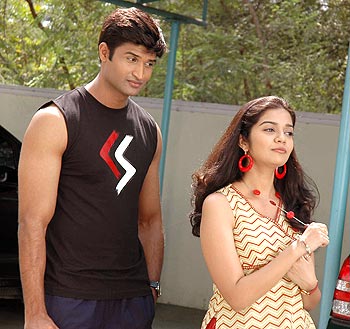 Image: A scene from Avakkai Biryani

Is it hard and challenging to find good work in the Telugu film industry?

Definitely challenging. We need to think in various dimensions. A new wave of a brand building of an actor should be there. The career should last, not be temporary. I should be able to work for 50 years.

What do you keep in mind while signing a film?

I learn a lesson with every film. With Kalavaramaye Madilo, I learnt that a production house is important.

I sign a film on the basis of script, director, producer and co-actors. I am listening to scripts. The process of hibernation will always be there for me. I will take my time to decide.