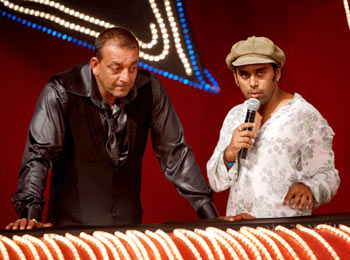 Sanjay Dutt may not be the best dancer in Bollywood but choreographers Bosco-Ceasar swear by him.

They have choreographed the actor in quite a few films -- from Musafir in 2004 to his upcoming film, All The Best.

A day before Dutt's 50th birthday, Bosco tells Patcy N facts about Sanjay Dutt people may not know, and of course, his dance. Over to Bosco:

Sanjay has charisma. He is a style icon. He has attitude and is very comfortable dancing though he is not very good at it. We try to bring out his cool attitude in his songs. He has a very international image. 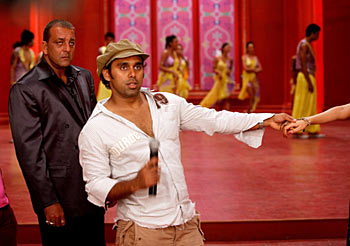 Even though he is a very big star, he makes you comfortable. We weren't nervous about choreographing him because he gives in to you completely.

He wants to try a lot of dance steps though some may not look good on him. He is ready to learn. We've used his style and attitude in Sakhi and that's why it is one of our best songs till date.

We worked on Munnabhai MBBS as well. We choreographed the slow, romantic song Chan chan, which was picturised on Gracy Singh and him.

As far as our songs with Sanjay are concerned, they are not really dance numbers. And even if they are dance numbers like Sakhi, we give more dance steps to his co-star -- in this case, Koena Mitra -- than Sanjay Dutt. Saamne Aati Ho from Dus is again such number.

'Some of the dancers had worked with Sanjay in his first film, Rocky' 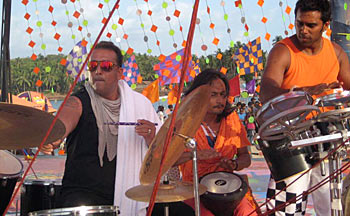 Recently, we worked on All the Best with him. We have choreographed two songs in the film -- Roar it and the title track.

In one of the songs, you will see Sanjay playing the drums. But he is not college boy or anything. It is a situational song. Even at 50, Sanjay Dutt looks young and like a stud.

When we were shooting for the song, we had about 300 dancers. Some of them had worked with Sanjay in his first film, Rocky. Sanjay recognised them and went up to them, and met them. He was so thrilled to see those guys. He hugged and greeted them. It's nice to know that he still remembers their faces.

'You will never be uncomfortable in front of Sanjay Dutt' 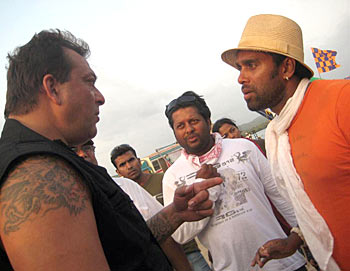 Sanjay is very chilled out on the sets. He makes everyone feel good. He chats with the spot boys -- if he sees them in sad or tensed, he tries to understand their problems and help them. He takes care of everybody. He is such a huge star but he has time for everybody on the sets.

He is a very positive person -- very lively. He has a great personality. You will never be uncomfortable in front of him.

'In real life, Sanjay is articulated and very polished' I recently choreographed him in Aladin, which also stars Amitabh Bachchan. There is a dance number called Chala Chala Chakar. So he dances in this song. He has rapped in Aladin too.

We will choreograph him next in No Problem -- the work has not started yet.

In the movies, we always see him playing a bhai or a tapori. But in real life, he is articulated and very polished. He does not speak like that at all.

I wish Sanjay all the best and a very happy birthday.