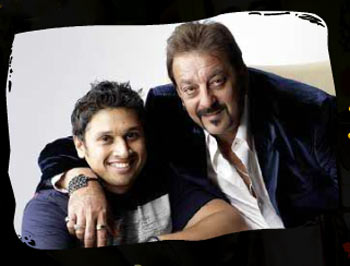 I have always been a fan of Sanjay Dutt. I have seen most of his movies -- from Sadak to Vaastav. I started gyming and weight training because of him. He started the trend of having a good physique, and others followed. He's very inspiring.

In Luck, we had newcomers like Imran Khan and Shruti Haasan and experienced stars like Mithun Chakraborty and Danny Denzongpa. Sanjay was the only one, who could gel with both the generations.

When I met him and narrated the story to him, Sanjay said he would need time and had to be completely fit. Initially, I thought he was trying to avoid me. He was looking for a script that would balance with his comedy films. When I narrated the script, he said he liked it and that he could connect with it, as it was for the youth.

I was in awe of him. But when I met him, he made me feel comfortable. In fact, he gave me inputs on how Mussa should look. He said that in all his movies, where he played a don, he wore a lot of yellow gold. But this time, he wanted to wear white gold. He has a fetish for glares so he bought about 20 of them for me to decide which one I wanted for the character. He helped me create the character.

People ask me how he managed to jump in the front of a running train at the age of 50. I would say he will do similar stunts even at 70 because he is very sharp. I wrote the train sequence after I signed him because I wanted to tell the audience that Dutt is the luckiest person alive. After all that he has gone through, he is still a deadly man. He has tremendous will power. If he is interested, he will go the extra mile to do things.

He is very soft spoken and humble. Being Sunil Dutt and Nargis' son, he has amazing family values. He respects others and expects the same. He is very unpredictable. He's free with the people he knows. Otherwise, he's very shy in public.

'Though he comes across as a bhai on screen, he is a child inside' 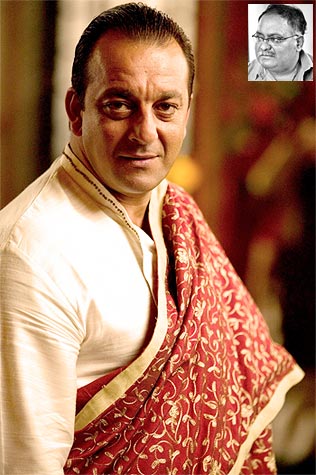 I met Sanjay Dutt through Vidhu Vinod Chopra. I know him as a loving, large-hearted person. Somehow, I feel protected when he is around. I remember him asking me to quit smoking, and I did it. I don't know why he hasn't.

During the shooting of Parineeta, he was supposed to do the Durga pooja dance with burning coal on his hands and mouth. We made him do all sorts of weird stuff, and he willingly did it. He mesmerized us with his dance.

We were shooting for Parineeta in a small place away from Kolkata. We would know he has arrived when we heard a roar from the people around. That's the kind of fan following he has.

The last scene in Parineeta where he has to make Saif [Ali Khan] believe that Vidya [Balan] didn't marry him was very intense, and he did it so naturally. He naturally started crying and that bought tears in our eyes too.

During the shooting of Eklavya, he chopped off his hair because his character required it.

It has always been very easy to approach him. What I like about him is that he still stands tall after all he has gone through. Hats off to him! He always has a smile on his face and constantly cracks jokes on the sets.

He has a different sense of humour with different people. He is someone who keeps everybody happy. Anybody who has interacted with him will feel uncomfortable with him. He always gave me the jaadoo ki jhappi that was so assuring and comforting.

Though he comes across as a bhai on screen, he is a child inside. He is simplicity personified, there are no complications at all. Even while shooting, he does his scenes in his own style. I don't have to worry about directing him.