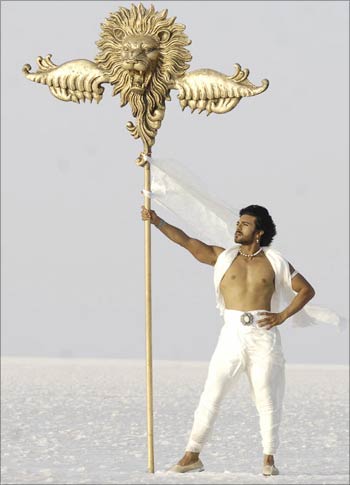 Rama Rajamouli, wife of Telugu cinema's top notch director S S Rajamouli, has carved a niche for herself. She styles clothes and the looks of films (mostly directed by her husband).

She is behind the look of Rajamouli's extravaganza Magadheera starring Ram Charan Teja and  Kajal Aggarwal. Her previous films include Sye, Chhatrapati, Vikramarkudu, Yamadonga, Mitrudu (where she designed for Balakrishna and Priyamani) and she is working on her forthcoming project Maryada Ramanna. Rama had also assisted Chandrasekhar Yeleti (her cousin) in the making of his first film Aithe.

She talks to Radhika Rajamani about designing for Magadheera.

You have styled Magadheera where it involves two looks for the hero and heroine -- part period and part contemporary. How did you go about this?

The modern look is the youngsters' college one where I didn't have to work that hard. The period look however required a lot of hard work to get it right. It took me a month to get the right look in my mind. We later worked on the material and stitched the costumes.

The colour scheme was decided at the beginning itself with Senthil (DOP), Ravi (art director) and Rajamouli. There was a lot of coordination with the sets and the lighting schemes. The story has a Rajasthan backdrop so I had to look up old books available and the Internet for references to design the ancient costumes

'The major look for Charan is a college-going look' 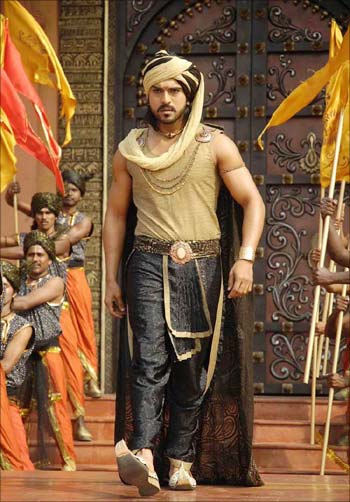 What are the kinds of costumes that the lead pair will be seen wearing? It looks as though Charan sports a cowboy kind of attire?

That kind of attire is only for a bit of a song. The major look for Charan is a college-going look, while the ancient look he has is of a warrior as one sees in the posters. So the costumes were done accordingly.

In the songs one can play around with costumes as there are no limits. So he wears rich clothes like a prince too.  The heroine, Kajal, portrays a princess, so her look had to be rich, elegant and bright. The hero's clothes are not heavy, while the heroine's are a bit heavy.

Where were the costumes sourced?

'I am the first critic of my husband' 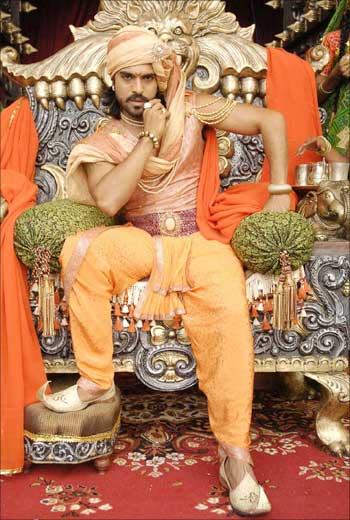 Did you work on the costumes and looks of the other artistes in the film too?

I worked on styling the entire film.

When you say styling, what exactly does it mean?

I look into the entire look of the character from head to toe, from hair style, jewellery, clothes to footwear and even the type of make-up depending on the mood of the scene.

How involved were you in the other aspects of the film? Did you give your inputs?

I generally don't get involved in the other aspects. I am present on the sets and keep thinking and talking aloud. There may be little inputs at times. I am the first critic of my husband. He normally sounds his ideas/thoughts to me and I give my opinion.

'There are no proper references as Magadheera is a fantasy story' 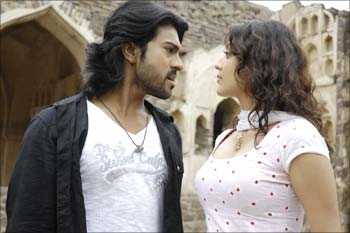 He does take it. For that matter, he thinks over whatever any technician says -- from a light boy to anyone. He gives it a thought and if he feels it is right he accepts it. He does not ignore anyone.

Has Magadheera been your toughest project till date? How challenging has it been to do it?

Yes, it has been demanding too. For Yamadonga, there were direct references to get-ups and one had to improvise upon them. Whereas here there are no proper references as Magadheera is a fantasy story.

Though the backdrop is Rajasthan, the references were useful for other characters than the lead protagonists. One had to imagine, match and put the costumes together for the hero and heroine.

'I have had problems with Senthil over colour' 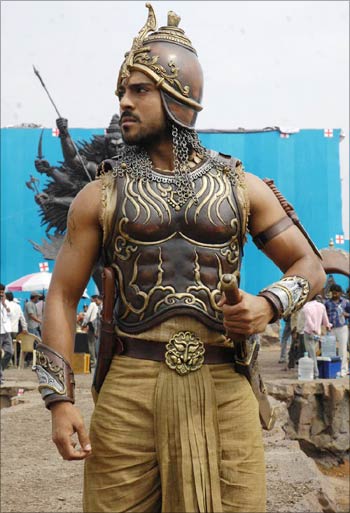 Do you have creative differences with Rajamouli? If so, how do you sort them out?

Once he gives the idea and the brief, he doesn't interfere with the technicians. There may be changes but I have never had a problem and no arguments. However, I have had problems with Senthil over colour.

Can you talk about the highlights of the film?

There are a lot of things. The entire look of the film itself is one. Every technician from Senthil, Ravi to the graphics team has worked hard and done a splendid job. The film has world class graphics.

'You never know what the audience expect' 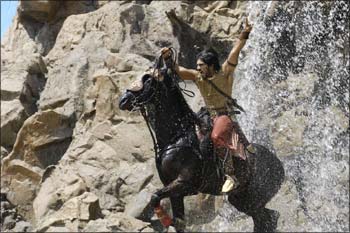 Image: A scene from Magdheera

Expectations are high. Will Magadheera match up to them?

You never know what the audience expect. When I think of that, it gives me the jitters.

When you design costumes, what do you keep in mind? Is it the script or the person you are designing for?

First the script and the scene and the body of the person who's wearing the clothes. I don't believe that one should wear what is trendy even when it does not suit him/her. What is suitable is important. So I keep suitability and colour in mind too.