Are these India's most talented?

The contestants on India's Got Talent on Colors have amazed the judges and viewers with their amazing talent. From Jim Carrey's Mask act to singing in two voices, these contestants are truly talented.

Rajul Hegde caught with some of the semi finalists to learn more about their skills and performances. Check out their talent on video as well.

Ganesh does not understand Hindi. But he can do the Robot dance, which he perfected by watching English films. He says that the robotic act is very difficult, as you need to learn to control each nerve of your body.

Besides the Robo dance, Ganesh can dance like Michael Jackson, Prabhu Deva and mime Hollywood star Jim Carrey to perfection. In fact, for his entry into the show, Ganesh mimed Jim Carrey's character in The Mask.

"People appreciated Jim Carrey in The Mask and after seeing my performance they have appreciated mine as well," he says.

His ability to twist and turn all parts of his body like Carrey has made him special. "People said that I am at par with Carrey. I think it's a very big compliment. To the best of my knowledge, I am the only one in India to do a Jim Carrey.

"Carrey performs with computer graphics and hi-tech camera techniques whereas I can do the entire dance in one take," he adds.

Taking about his unique talent, he says, "My speciality is skipping without a rope. I can do it very easily because I have been doing it for the past 10 years."

Ganesh has done the most innovative puppetry item on the show. He is confident that he will make it to the finals. So what act will he perform if he reaches the finals? "I will do something fresh," he says, without revealing anything.

While one is an IT professional in Bangalore, the other is working in a call centre in Chandigarh. And it was technology that brought them together. Their talent is composing tracks/raps via Internet -- they call it 'jhunthe rap'.

One of them wrote a song after being dumped by his girlfriend.

"Rap is not so popular in India but we hope to showcase our talent with this show," they said. "People can connect with our rap, especially teenagers, as it is all about emotions. And if you can put these emotions in words and rhythm then it becomes rap. Earlier nobody would recognise us. Now wherever we go we're known as the jhunthe guys."

Both of them said they have drawn inspiration from Dr Ray (the father of Hip Hop).

This 56-year-old and can sing in both male and female voices.

Inspired by sisters Lata Mangeshkar and Asha Bhosle, Chandra grew up listening to music and was even part of the Sa Re Ga Ma Pa competition a few years ago.

"I can do Kishoreji ka yodelling very well," she said adding that nobody can tell that a woman is singing the song. "When I sang the Aati Kya Khandala duet in male and female voices, Shekarji (Kapur) was not very impressed. He said I could go to the next level only because the other two judges (Sonali Bendra and Kiron Kher) had given me the green signal.

"But after my last performance, he said that he will take back his words and would like to see me in the next level. I am very confident that I will reach the finals," she says. 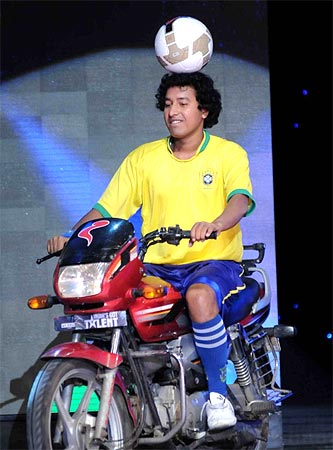 Uttam holds a record for swimming across the Hooghly river with a football on his head. His only love in life is football and has been playing the game since childhood.

Though he did not make it to the local football team, he kept his interest in football alive by learning to juggle the ball, a skill which has impressed the judges.

They weren't the only ones. "Mardonna [Argentinian footballer] was impressed with my skill and gave me a big hug and kiss. That was the best moment of my life," Uttam recalled.

But despite all this Uttam is not confident that he will reach the finals. "Though I have a unique talent, I don't think I will make to the finals because other contestants are very talented."

But anything is possible especially for someone who can balance a ball and ride a bike at 35km per hour!

Another MJ in the making? 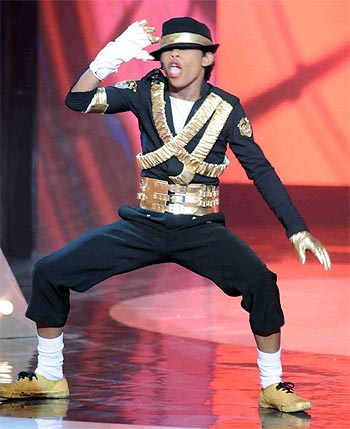 The 10-year-old is a big fan of Michael Jackson. He has eight brothers and sisters in the family. None of them are educated although all the brothers are into dancing.

"I am planning to do a rope dance in the next level. I have two minutes to perform and if I miss even a step, I am out of the show. I am really working hard on it," he says. 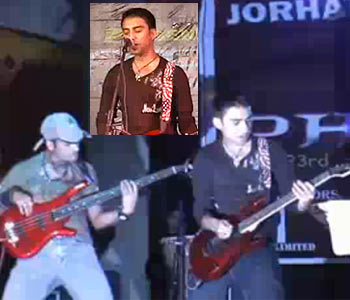 This three member fusion band from North East's Assam is five years old. The USP of the band is that its members perform on their M-sonic package regardless of who the composer or the singer is.

"Whether it's new or old, it will be different when you listen to it," band member Maynak says. "The judges have always given positive comments."