What turns Celina Jaitley on 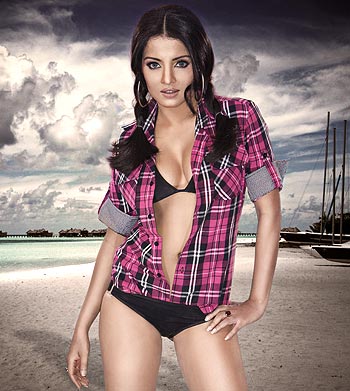 That is what the late Feroz Khan called his last find. This light-eyed beauty, of Afghan lineage, debuted in his Janasheen in 2003. Back then, the former Miss India walked into many hearts as she emerged from the sea, violin in hand and a bikini firmly in place.

None of her pictures are ever dull. She flaunts her twin assets admirably well in low-neck blouses or bikini tops. To keep up her glamorous image, Celina is often seen in hot pants, micro minis and plunging necklines.

The image contradicts the words. In her interview, this sexy babe breaks her glam image and gives an insight into her life, her muse and the man she is waiting for.

Celina is totally clued into the lucky numbers game, enjoys a strong cup of coffee, doesn't have qualms about being labelled a Barbie doll but can turn into a 'naagin' if someone rubs her the wrong way.

"The worst thing was that these images started popping up on major web sites and could be downloaded. It was a direct assault on my dignity and character," she added.

'I am always in the news whether it is for the hot pants I wear, my hair or makeup' 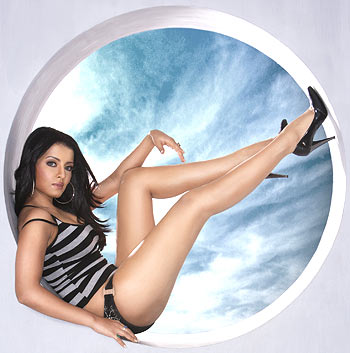 Celina is associated with various causes. She is an activist for gay rights, has worked with the Army Wives Welfare Association for soldiers and their families and is associated with a foundation that helps abused women traumatised by acid throwing and burning. She campaigned for the Congress during the elections. A woman who has championed so many causes, surely, wouldn't take such an assault on her dignity lying down.

"I judge if the matter is worth paying attention to. And I felt this was as it was outraged my modesty as a woman."

Celina, who walked with her gay friends in The Gay Pride Parade, says she was inspired to take up the gay rights cause due to two people in her life, she considers her muse.

"The first one was Pradeep Kumar Dey, a 50-year-old make up artist, and my local guardian in Calcutta when I first moved out of home. A transgender who wore salwar kameez, he was very warm, affectionate and motherly towards me.

"Not only did he groom me for modelling, he secretly sent my entry for the Miss India pageant. He would hang out at my sets, lend me money, fuss over me in a motherly manner. Dey passed away in a road accident. He was a victim of gay bashing, of people's views against homosexuals." 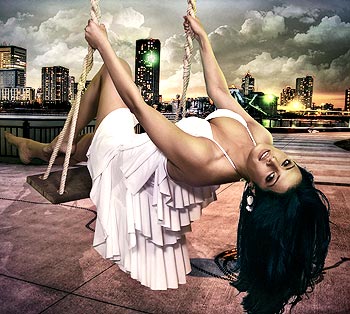 "When I grew a little older, I fell in love for the first time with a guy, who was a closet gay. That changed my life forever. Not only was I emotionally destroyed, I couldn't deal with the fact that it could happen to me as a woman. However, after the relationship ended, we became good friends. Last year, he too, passed away due to a bulimia-induced heart attack.

"Towards the last three months of his life, he had stopped eating, would only pop vitamin pills, drink whisky and exercise too much -- all of which is a bad combination. He died a slow painful death. The passing away of this particular friend was the last straw.

"This is my reality. It is the story of my life and the people associated with it. These are the darker parts of it. I thought it was high time I did justice to the memory of these two very special people in my life and the many gay friends who have been with me. So when The Pride Parade took place last year, I decided to walk with them and stand up for their cause."

She is sincere about these causes. She has submitted a petition to the health ministry to help gay people get legal rights and recognition in the eyes of society. She is also establishing a foundation for transgenders, old and ailing gay people.

Besides her social activist life, Celina says, "I also manage to do a few films."

That is an understatement for an actress who has five films on the floor -- Run Bhola Run with Tushar Kapoor, Hello Darling, Accident on Hill Road, Showman with Govinda, and a Kannada remake of Aitraaz. She says she would like to work with Anurag Kashyap, Pradeep Sarkar, Rituparno Ghosh and Karan Johar.

So, just why is this young 27-year-old girl who could date any one, been single for the last four years? Celina's mood turns sombre as she replies, "It is harder for glamour girls to find a genuine guy to date. I believe one attracts his/her soul mate when the time is right."

'I have a thing for men in uniform' 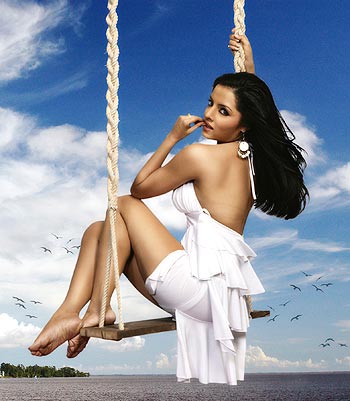 Talking about her choice of man Celina said, "My man should earn one dollar more than me, respect me, be a gentleman and have a fabulous sense of humour. I want the most compatible soul mate in the best possible manner.

"I love simplicity. Of course, I would like to be spoilt but not on a first date. I would like my man to be proud of me, have the courage to take me out openly and not run away from publicity or fear being overshadowed by me. I know people who get upset because the waiter was nicer to me than them. This is the sad story of a girl who hasn't been on a date for a long time," says this beautiful actress.

"I am a romantic at heart. I have an image of my nana, waltzing with my grandmother in a chiffon sari and pearls, of my father who brings flowers every day for my mother, my brother who showers his girlfriend with gifts and doesn't look at another woman."

Ask her what kind of man turns her on and pat comes the reply, "I have a thing for men in uniform. The uniform totally does it for me. So a guy who has been, is, or has something to do with the armed forces would be ideal for me. I like lean, mean military men with a crew cut. I am not a fan of bulging biceps. I would like my guy to be chivalrous, to hold the door open for me. It is very important that he maintains good hygiene.

"Either come in a uniform or a tuxedo," she invites.