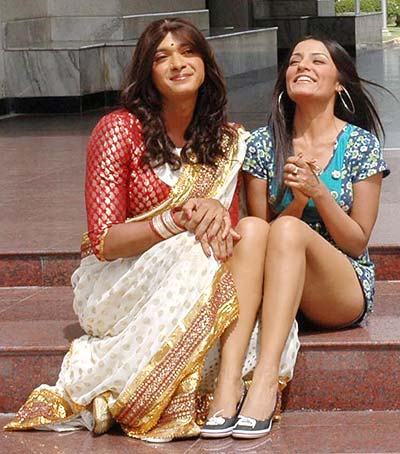 The movie, based on a play, promises to tickle your funny bone and addresses a problem quite common in cities like Mumbai. Celina talks to Patcy N about the film, and also shares her own experiences about being a paying guest.

What is Paying Guest about?

It is a comedy about four boys in search of a rented house. Most of the film is shot in Bangkok.

I have done many comedies but this is the first time I'm doing a film based on a play. There are no heroes or heroines, all of us play important characters.

I play a Punjabi girl, born and brought up in Thailand. So I wear hep, western clothes like shorts and tops throughout the film. My character is very naughty and loves animals.

'Shreyas plays my boyfriend as well as my sister-in-law' 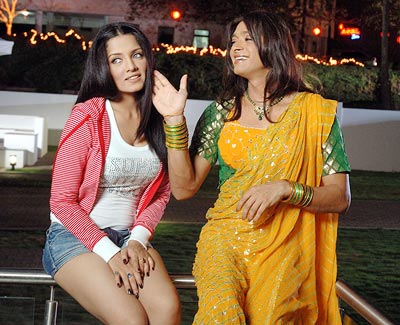 Shreyas dresses up as a woman in the film.

This is the second time I'm seeing Shreyas in a woman's get-up after Golmaal Returns. But he carries himself very differently in both the films -- the way he walks and talks is mindblowing!

Shreyas plays my boyfriend as well as my sister-in-law in the film. When I was talking to him dressed as a woman, I felt as if I was actually speaking to a woman or to my own sister-in-law -- he acts so well!

Javed Jaferri also dresses up like a woman but is very modern compared to Shreyas. Shreyas wears saris while Javed wears golden hair and western outfits. He's so tall and broad that it looks really funny but quite cute too. Both of them are so fabulous it looked like we had two more women on the sets. 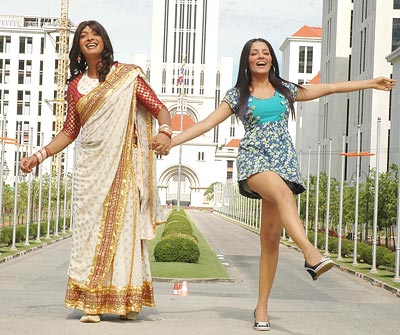 How was working with first-time director Paritosh Painter?

For a first-time director, Pari has done a great job. As he is from a theatre background, he's a very good actor as well. And when an actor directs a film, he directs it better because he knows exactly what he wants from his actors.

He handled so many actors together at one time on the sets, which is exceptional. Everybody has their own needs and demands and tantrums and moods, but Pari was brilliant. He is a very calm person. It was fun working with him.

How will Paying Guest be different from all the comedies lined up?

Even though this is a comedy film, it is very realistic. It deals with a problem that we face. All those who have stayed in paying guest accommodations will know what difficulty we have had to face. Staying as a paying guest can be blessing as well as torture. This film has a funny point of view of the reality in people's lives. 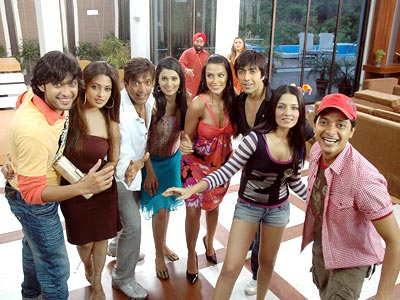 Any personal experiences as a paying guest?

We youngsters come to big cities from small towns in search of jobs, and have to face many problems. I come from a small town. When I went Kolkata in search of a job, I faced a lot of problems. First of all, I had to keep jumping from one PG accommodation to another. Once, my landlord took my deposit and asked me to leave the house in the middle of the night! So I found myself in a taxi with my suitcase, not knowing what to do in a new and big city like Kolkata. My friends helped me out. If we take these incidents and look at them from a comical angle, it becomes a nice film that we can all associate with.

The comedy is woven properly in the story, it's all situational comedy. The tragedy of each character is shown in a comical way. 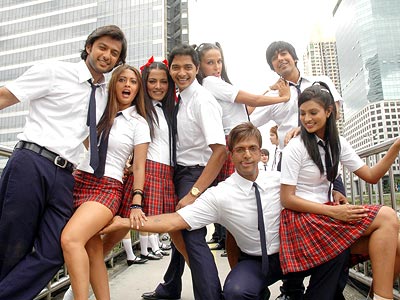 Tell us about the music of Paying Guest.

Sajid-Wajid has given brilliant and melodious music for this film. All age groups will like the music. We enjoyed shooting the songs, especially Jack & Jill, where we got to wear school uniforms. We were re-living our school days then.

The director has picturised the songs according to the situations. The songs don't spoil the flow of the film.

There is a big star cast. Any cat fights on the sets?

I don't know why the media always thinks that if there are many actors on the sets, we will be wrestling it out. All of us came to the sets, worked, had fun and left. The day we wore school uniforms and danced on the streets of Bangkok was the best day of shooting.